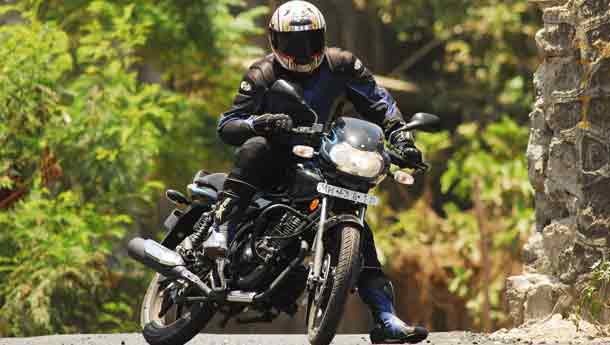 What is it?
This part is quite straightforward. Visually, the Disco 135 sports new styling.  The black look is quite stark and the Disco does look attractive. However, the 125 gets similar (if not identical) dark styling, which once more destroys some of the I'm-bigger-than-you factor. Internally, the motor is bigger (up to 134.2cc), makes more power (13.1 bhp) and more torque as well (1.21 kgm). The chassis mods are relatively light, with the biggest change being an upgrade to Pulsar size rims and tyres. However, please note that these tyres are not MRFs, our test bike came shod with Eurogrips that mimic the MRF Nylogrip pattern.

Is it fast?
Yes it is. Compared to a 125, the performance advantage is fairly obvious. However, this is a fairly calm sort of machine, and despite the power gain, it’s not going to be described as bursting with power or any such. Progress is brisk, the urgency is understated and I can quite imagine a I-just-want-a-commuter-type feeling quite happy aboard it.

How does it handle?
As expected, with the light chassis mods, the machine feels very similar to the Discover 125 in corners. It is light, goes where you point it and generally feels nice. The fatter tyres only bring a sense of greater grip to the package and don't otherwise add or subtract anything. The brakes too are fairly similar in feel and power terms (to the P150), except that instead of the familiar KBX on the master cylinder, I spotted an unfamiliar ETS. The 135 also gets gas shocks like the Pulsars and ride quality, as a result, is slightly more damped than the already pretty good double-spring thingies.

What is the upshot, then?
Bajaj have created a premium 125cc motorcycle by raising displacement, rather than loading the bike with graphics (a la Glamour). In the process, the motorcycle also gains a tacho, a front disc and larger size wheels. On the face of it, this is a nice set of upgrades for a mere three grand. The Discover was always a very likeable 125, and this is even more so, because of the larger motor. However, in character terms, the 135 is a very calm, chilled out sort of machine, so the extra power simply makes for an even more effective commuter, rather than a new enthusiast's dream. All told, the 135 isn't really my kind of machine, but I have a feeling that older commuters looking for a more upscale 125 or a more powerful weapon will flock to the 135 – which, I imagine, is exactly what Bajaj are hoping for.

Does this remind you of the Hero Honda Ambition... didn't that flop?
Yes it does. However, the HH came when it was competing against the 125s with no actual 125cc sibling. In Bajaj's case, this is their way of making a premium 125 – more displacement.

How does it compare with the competing 125s?
The Disco in 125 form took second place in our 125 shootout. And this is that bike with more guts, so it's obviously looking very good. The price difference is only about Rs 3,000, and for that, the 135 is worth it.