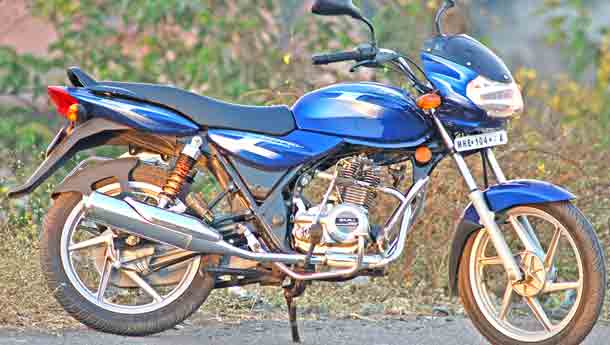 As engineers at Bajaj got to work on the Discover project, they codenamed it K60 after a benchmark that they had set for themselves – the motorcycle they were building had to return 60 kpl in everyday situations. It did just that and how? Bajaj entered the 125cc segment with the Discover, not to play the game but to up it.

VISUALS
The Discover is a commuter with a difference. It looks so much less mundane, it actually looks sexy. The Discover, now is almost two years old, yet it still looks fresh off the drawing board. The oval-headlamp with the bikini fairing along with the neat looking tail-piece survived the scalpel when the Disco was face-lifted last year. A bunch of stickers along with Bajaj's SNS suspension were also slapped on as part of the new look. The facelift also meant that Bajaj stopped selling the Disco-variants and the only model now available is the one with alloys, drums and a self-start. Although we wish the disc brakes had stayed.
7/10

MOTOR
The Discover gets a 124.52cc DTS-i engine that is mounted firmly into the twin-spar cradle chassis. To look at, the engine resembles that of the Pulsar's, but that's where the resemblance ends. The engine designers worked around the counterbalancers that do work in the Pulsar twins and have tweaked engine components to reduce friction and rotational mass and have come up with a smooth running motor. The Discover was the first of Bajaj's motorcycles to get the exhausTEC treatment. The small resonator at the end of the bend pipe has the same effect like that of an expansion chamber on a two-stroke motorcycle. With all these goodies bolted on, the Disco offers 1.1 kgm of torque, (which puts it at the top of its class) while the exhausTEC system maintains the torque at a solid 1 kgm in a wide rev band that spans from 3500 to 6500 rpm. The 125cc engine is also ahead of the other 125s in putting out a peak power of 11.5 bhp. The upgraded Disco also has a delayed spark near the wide-open throttle position which helps to reduce the sound of the engine firing, and as a result, the motor is quieter at higher revs. The downside to this package though is the gearbox. The four-speed (all-down shift pattern) gearbox sounds a distinct thunk every time a gear is engaged and this can be quite an irritant.
6/10

NUMBERS
The Discover when put to the test comes away unscathed. She reaches 60 kph from a standing start in just 6.49 seconds, that's a full 1.5 seconds quicker than its competitors. The wide power and torque bands make the Disco brisk through traffic and a top speed of around 110 makes her a capable highway muncher as well. Sounds like a manic commuter now, doesn't it? And we've got to tell you that you can have loads of fun on the Disco and yet she will faithfully score above a 60 kpl in the fuel economy runs.
6/10

DYNAMICS
The Discover's cradle chassis was built with larger diameter tubes that not only added to the visual appeal but also strengthened the chassis. As a result the Disco weighs in at 125 kg which is not light by any means, but a low seating position and a centre of gravity masks the weight very well. Which allows you to flick the bike very easily through corners while the 1,305 mm wheelbase maintains the stability of the Disco. Bajaj engineers have given the Disco more travel – 135 mm up front and 110 at the rear. They have also managed to reduce stiction (the friction that forks have to overcome before they react to bumps) by using teflon-coated bushes in the forks. The rear is damped by Bajaj's SNS suspension – two springs, one inside the other with different ratings that combine to give a triple rating spring. The end result is the Disco's ride quality has gone up a notch. Once on the motorcycle, you will realise that the ergonomics feel just fine but if you are a bit on the bigger side, you might find the Disco a tad bit awkward as your knees will find it hard to hug the tank. The Disco's chassis setup along with the alloy wheels and the Dunlop Zebra Y tyres are confidence inspiring but the lack of a disc brake up front doesn't help the sporty attitude of the Discover.
7/10

VFM
So after all of that, where does the Discover stand? Still top of the class, we say. It's definitely not as comfortable as the Yamaha Fazer, but is more stylish than the Honda Shine and definitely not as common an occurrence as the Hero Honda Glamour even though it seems to be outselling it. And what's more is that it's currently the only motorcycle in it's category that has on offer alloy wheels and an electric starter as standard equipment. We'd love to see the front disc back even if it means a few thousands more.
7/10

VERDICT
The Discover is the motorcycle that every aspiring executive commuter wants to be plus a little more. The stylish looks, sporty fairing and the sleek looking tail-piece along with the low-vibe engine with its performance paraphernalia simply puts this motorcycle on top of its class. So if you want a clever little motorcycle with a sporty looks and aren't willing to shell out a few more thousand for the Pulsar 150, this is the bike you should opt for. And you will definitely stand out from the ubiquitous bikers in the street.