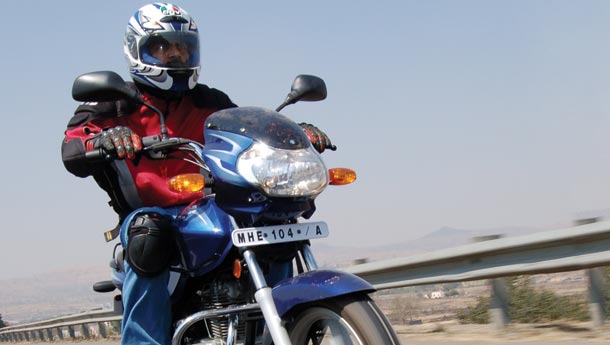 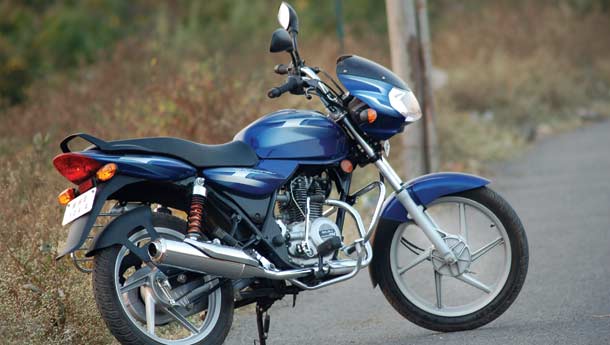 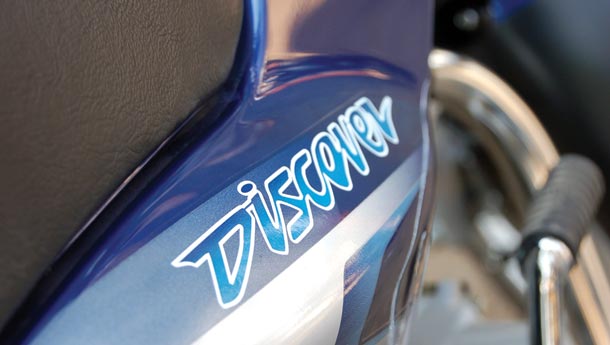 If looks could kill, we’d see a lot of people drop dead around every street corner. Well actually, if looks could kill, I foresee most motorcycles in the commuter segment keeling over and expiring wistfully. I wish I could tell you that it was a 110cc motor set in a red trellis frame with aluminium highlights  that was responsible. It’s not. It’s actually a 111.63cc motorcycle that’s wearing the Discover’s sporty looks and is ready to make its presence felt in the commuter segment. A welcome change for a segment that reeks of monotony, I say.

A glance at the baby Disco and you will soon realise that it’s a replica of its elder sibling, right from the switch gear down to the rear end. The sharp lines on the tank and tail lamp fused into the rear cowling still look stunning (I wish they had put that tail-lamp on our Pulsar). It even sports 17-inch alloy wheels – a first at this end of the commuter segment.

What I’m not to happy about though is the rear wheel hugger and the annoying fuel gauge. The hugger just looks out of place. It keeps the muck down but at the end of the day the average Joe is probably going to attach a regular mud flap to the rear anyway. And the fuel gauge can’t seem to decide whether it wants to read full, empty or somewhere in between and I’ve noticed this on the 125cc Discover as well. Commuters are marketed as fill-it-shut-it-forget-it bikes, so I don’t think too many people actually care about the gauge and if it’s there as an added feature, it may as well work, right?   Looks apart, the spec sheet looks promising as well. The little one has an engine that externally resembles the CT 100 but the guys at Bajaj say that’s about as far as it goes. The inners have been refurbished and include completely different bits. The Discover’s 111.39cc engine is barely 3cc down on the 114cc Kinetic Boss engine, and matches the LML Freedom Prima 110 in putting out a top of the class 8.5 bhp@7500 rpm. The Discover’s rear wheel turns out 0.95 kgm which once again puts it on the top of the tables.

Spec sheets are generally deceiving, so here’s how they really read. 0 to 60 kph in just above 8 seconds with a top whack of 90 kph. Solid numbers, but it’s a commuter for crying out loud, numbers hardly matter. The throttle response is rather subtle and the bike with its Exhaustec system didn’t pop any mini power wheelies (like the CT 100). New cogs were mated to the engine and made life through traffic and down the highways relatively easy but a ‘thunk’ still dogs every gear shift. The engine seemed rather refined although at higher revs, vibrations found their way into the foot pegs and bar ends and the engine felt rather stressed. The engine gave me the no-nonsense, no-thrills vibe.   I rode through Pune city and down the Mulshi road expecting some beautiful twisties. Trust my luck to get craters and road builders but thankfully the Discover to handle them with. Bajaj has built the Disco 112 around an all-new chassis. The thing looks like the CT-100’s single down-tube split cradle but uses the wide diameter tubing just like the 125cc Discover (which nets a full double cradle). The rear gets the SNS treatment and presto, you have by far the best ride quality on offer in its class. After 100 odd kilometres on back breaking roads I got back to the hotel as fresh as a daisy (Er... Who’s Daisy? – Nandu ). A downside to this was a stiffer than usual ride on good roads, but you can always cure that by adjusting  the pre-load. The 112 wore Disco-standard 2.75-17/ 3.00-17 Ceat Secura Zooms with 130mm drums at both ends which did quite an adequate job. Pity the disc isn’t an option.

Now, for what matters the most (to most) – fuel economy. Over a period of two days of riding in the city as well as a longish highway stint we managed to clock 300 km and burn just about 6 litres. Do the math and you have a grand figure of 50 kpl. It might be on the low side, but attribute that to my chronic twist of the wrist disease. If you were to ride in the city, all the time, with a gentler disposition to the throttle, you would get 63 kpl.

Here’s another big factor, the price. The Discover 112 will lighten your coffers by Rs 39,000. But hang on a minute. There don’t seem to be any direct competitors. There is the Centra, which is cheaper by 4000 bucks, but when was the last time you saw a new one?

There is also the ubiquitous Splendor, but the, again when was the last time you didn’t see a new one? Besides, the Disco is cheaper. So then, what we have here is a motorcycle that’s a nice commuter at an even better price. And here’s another thing. The Disco 112 isn’t a bad option to the 125 either. It looks the same, goes around corners just as well, it’s quieter and most importantly, it’s Rs 3000 cheaper (kick start versions,both). If you were to ask me I would pick this one over the 125 too. BSM