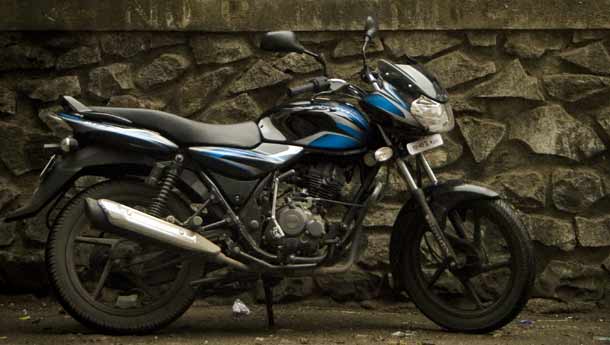 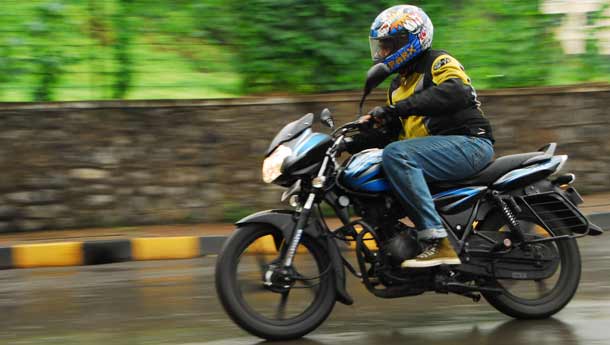 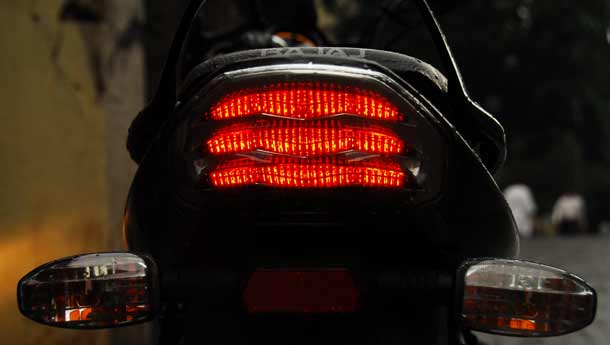 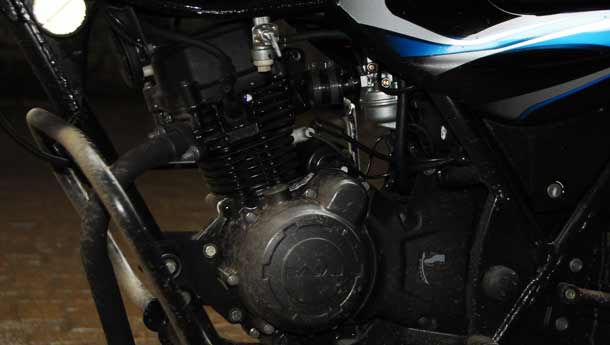 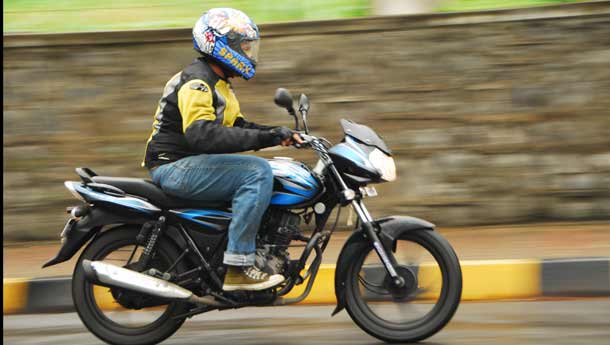 It's been awhile since there has been a motorcycle out of the Bajaj stable that has dragged me by the collar into a showroom. The first Pulsar did that, and I also remember very vividly how I stared with my face touching the glass, at the first Eliminator at the Planet Bajaj showroom. I didn't land up owning either, but every time I saw one go by, I wished the small change in my pocket had somehow multiplied a thousand-fold. Predictably it didn't, but then, Bajaj hadn't come up with anything that truly made me get up and take notice after that.

But here is a bike that looks like the Discover, shares the name of the Discover but is nothing like the Discovers of yore. There I am, my boots soaked with drool as I stare with a stupid grin at the matte grey engine - it's the start of yet another blooming love story with a Bajaj.

The specs don't seem to be out of the world - a 94.4cc, two-valved single that makes 7.5 bhp at 7500 rpm with 0.8 kgm of torque at 5000 rpm. So what exactly makes me love this motor so much? For that, you need to thumb the engine to life. The little DTS-Si engine is punchy at low rpm, pulls away cleanly through each of the five gears and the best part is that it's creamy smooth all through. No, it's not lifeless like a bowl of chopped cabbage; it grunts and sends sweet tingles through the foot pegs, but in just the right quantities - so much so that it feels almost like a premium 150cc till you look down at the speedo. This is the sort of engine that you love climbing up steep sweeping twisties with, and as you ascend at an increasing pace, each and every click upward through the gearbox brings with it a feeling of pure exhilarating joy.

Performance isn't the best there is, but it's healthy enough to keep up with city traffic, and some more. Standstill to 60 kph takes about 13 secs (it was a rainy and miserable day, so it could better when the sun's out) and I managed to push the little Bajaj to about 79 kph with a tad more to go. These aren't exactly world beating figures, but Bajaj claims that the Discover is probably the most fuel efficient motorcycle there is today, with 89 kpl in real world riding conditions. I think the thing burns less fuel than me walking!

The gearbox, however is a bit of a letdown. Although it's a fine shifter, with every cog slipping in true every time, the all-down shift pattern is where my grouse lies. Call it dangerous or just plain inconvenient, whichever way you look at it, it's got to get the boot. The one-down-and-rest up pattern is where things are at, and I sincerely hope Bajaj is listening. I'm glad the Discovery got the number of gears it does, the five toothed wheels do wonders to bring out the best from that very delightful engine, endowing it with its brilliant long-legged feel.

This is a commuter through and through, and the Discover makes no bones about that fact. An upright riding position with high bars makes city commuting a cinch but long hours on the saddle could be a tad uncomfortable as the seat seems to be a tad too narrow for my liking. However, the surprisingly supple suspension is just the thing what the chiropractor ordered. Riding on Mumbai's potholed roads seemed like a ride on the proverbial flying carpet, and I actually kept going into the craters rather than zigzagging around them, quite confident that the suspension would smoothen them out easily. At speed, the bike seemed to pogo a bit, but that's what any soft suspension would do anyway. Honestly, I'd rather be jittery at high speed than have my vertebrae telescope into each other while rolling along at sub-60 kph speeds where the Discover is meant to spend most of its liftetime in.

Another factor that needs improvement in the Discover's plate are the brakes. Ever since we as a motorcycle market have tasted the kind of braking performance discs offer, drum brakes will be looked down upon, with good reason at that. The front drum on the Bajaj seems to hold a prolonged dialogue with speed, rather than shoot it down as soon as possible. When jabbed at, apart from returning very poor feel, the right lever seemed to keep going down all the way with hardly any movement of the speedo needle. The rear brake is the saving grace, with a mile-long lever that does the job when you demand it to be done.

Switchgear is adequate but seems to be not in keeping with the kind of build quality as the rest of the bike. The switches turn with a listless limp, instead of an enthusiastic click and the big blue ride control thing makes an appearance on this Discover as well. I am now of the opinion that I'm probably the only one who thinks that it's a waste of space - to me, an engine kill switch makes more sense, really.

Handling wise, the Discover is just like its older siblings. That's not a bad thing because, just like them, the Bajaj is a neutral handler and is agile enough for brisk city riding and can be pushed around corners as well - just as long as the tyres hold up. Sadly, Bajaj hasn't improved on the Disco's rubber which is surprising, especially since they've learned what wonders better tyres can do to their motorcycles, with the new P220 making the best of this realisation.

On the whole, the new Discover is an honest commuter. Although all the spice seems to come from the super engine and the great suspension, the new Discover is Bajaj's return to the lucrative 100cc market, and a promising one at that. If you're looking at a frugal commuter that can bring a smile to your face now and then, walk into a Bajaj showroom with forty grand in your pocket to book one for yourself. Those of you who are on the lookout for a nice and small snorty engine for your mini-moto project, go get a Discover as well - simply because I don't think Bajaj will sell you just the engine, it seems.