Bajaj Auto has launched its CT100B commuter motorcycle at a price of Rs. 30,990 ex-showroom New Delhi. The bike will return a stupendous fuel economy of 99.1kmpl. Bajaj Auto, which claims the cost of the bike the 'best ever’, is also offering a two-year warranty on the motorcycle. 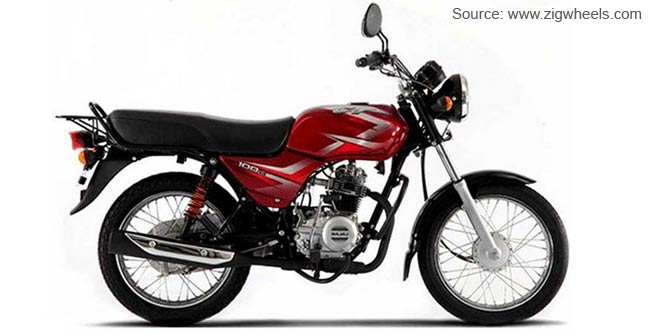 The CT100B, which is a more affordable version of the CT100, is an attempt by the manufacturer to re-establish its name in the base commuter segment, since the company had been focusing at the premium end.

In terms of design, the CT100B looks the same as CT100, with a simple round headlight and the same fuel tank and side cowls. Evidently, Bajaj is focusing on attracting prospective buyers with price and fuel efficiency numbers of the motorcycle rather than its looks.

When you see the CT100B’s round headlamp and the same fuel tank, it also resembles Bajaj’s Boxer, sold in the segment years back. However, the company claims that the flat seat on the CT100B is thicker and more comfortable than before. The rear grab rail comes with a coat of black powder, not adding much to the aesthetics of the bike.

Powering the CT100B is the same 99cc engine from the older CT100 producing 8.2PS of power. The engine though has been updated to enhance fuel efficiency.

Eric Vas, president - motorcycles business, Bajaj Auto Ltd said: “With the CT100B, at the best ever price, customers can enjoy the pleasure of owning a new bike rather than compromise by searching for a second hand bike. The CT100 is one of the most successful entry level 100cc bikes in India selling over 5 lakh bikes in the 12 months since its launch last February,” he added.