Bajaj Avenger vs RE Thunderbird vs Yamaha Enticer 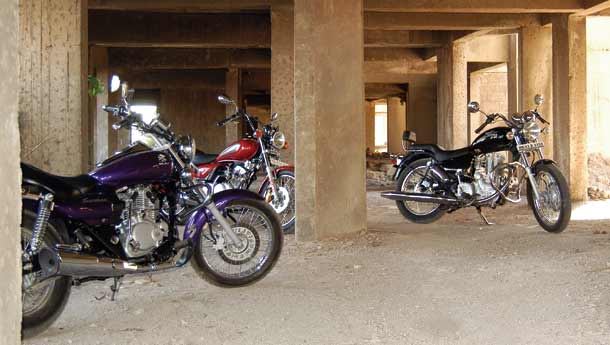 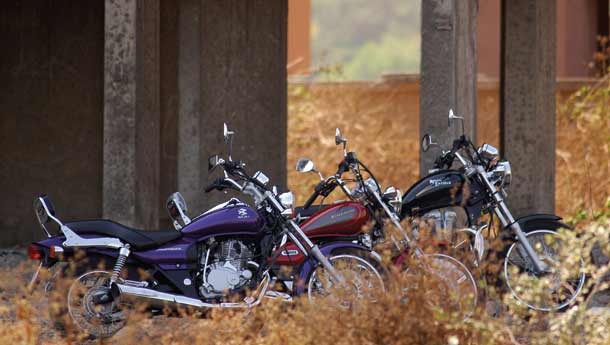 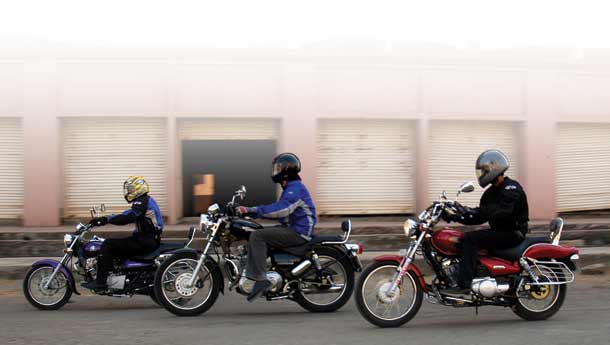 My wife’s cousin’s been hankering after a cruiser for years. He’s been badgering me to find a decent machine that’ll do 40 kph with authority, span a city between the axles and have enough chrome to send on-lookers cowering behind their darkest pair of shades.The only problem is he won’t settle for a single-cylinder and he won’t even dignify anything under 500cc with as little as an eyebrow raised in inquiry.
So this story isn’t for him. If, however, you’ve had a similar, but downscaled, desire for a little bit of chrome in your life, you’re looking at the three machines that might just hold your cup of tea.


The Enticer has been on the shelves the longest, and to its credit, there’re no crows-feet around the eyes yet. It still looks classy and has all the elements of a cruiser, albeit one with a 125cc single-cylinder heart. The deluxe version – with a disc brake and electric start – came out later, and proved effective, if a little expensive.

The Thunderbird is the second-oldest of the machines here. It’s Royal Enfield’s way of making a cruiser without touching the fifty-year old (read proven) chassis. It gets a slightly taller front fork, raked tank, chrome pods, plasto-chrome sidepanel accent capsules and a backrest to complete the look.

The Avenger is, in a sense, the challenger. The erstwhile pricing of the Eliminator, requiring the total assets of six nationalised banks to purchase, was out of reach of almost everyone. Those who could buy it could also afford to extend the outlay to include one of many 250cc and 400cc Honda Shadows and Steeds that are surprisingly easy to find. As you know from BSM’s last issue, Bajaj did a pretty good job of shoving the 180’s motor into the frame and carrying out a series of tweaks to the chassis. While the looks are the same, the Elim, no, Avenger feels almost new, and has a price tag you cannot argue with.

Which brings us to why we tested this motley crew – well, the Thunderbird’s price is roughly where the Eliminator used to be and the Enticer Deluxe’s tag is almost the same as the Avenger’s. But for the moment, we’ll leave the value/price angles simmering on the backburner, and go for a ride instead. Starting out on the Thunderbird is a good idea. The engine is a bit noisy, but has enough torque for most needs. You could push the machine for outright speed, but it tends to increase the engine’s (sound) volume quite a bit later on, and seems pointless. Show the Thunderbird a clean stretch of highway, put about 3-odd thousand revs on the tacho in top gear and you could do this all day. Or until the fuel ran out, which can happen pretty quickly. While low speed running returns as much as 43 kpl, sustained 80+ kph riding will drop that number sharply, to as low as 36 kpl.   In the corners, The ‘Bird takes a little getting used to. However, once you’ve understood the slow steering package, the high-leverage handlebars and the vague feedback from both ends, it can be cornered pretty darn hard. Until the super-wide rubber pegs grind down, that is. And they will. I know more than one T’Bird rider who has had to bend the pegs upwards to ‘create’ more cornering clearance. The weakest part of the package is the ride quality. The shocks are sprung very stiff, and our long term Thunderbird improved considerably after we replaced the stock shocks with the new gas units from the Electra.

Still, for a Bullet, it is quite amazing. The left-foot shifter is only a bit notchy, neutral is easy to find and it does have five left-side shifted gears and it even starts relatively easily. Quite likeable really, if not altogether right. However, hop into the Enticer’s low saddle and you will sing a different tune. Suddenly, you’ll recall the extra vibes in the T’birds grips and love the smoothness of a more modern four-stroke single. However, the Enticer will tire the faster riders quickly. Four gears just aren’t enough and you feel slightly out of breath by 85 kph. Not bad by the 125cc standard, but definitely early for a cruiser. Ride quality isn’t too great either. Any bike where your legs, torso and rear shocks configure into a Mercedes-Benz logo will have shock absorption issues. And so does the Enticer. The fact that you cannot stand on pegs (only the T-Bird allows this) makes bad roads highly avoidable.

What the Enticer has in spades is handling. It’s quite nimble, turns in easily and you can consciously get the flat footboards – now those are a really nice touch – scraping hard along the tarmac. It’s a willing partner in corners, and you’d be surprised how much lean angle it takes to get the U-shaped metal clips under the chrome and rubber boards clattering along the road.

The Avenger, in contrast, is an equally good handler but its footpegs are mounted a little bit higher in the frame, making dragging them much harder. In fact, if you routinely run out of cornering clearance on the Avenger, you’re trying too hard.

The Avenger’s engine has a nice, throaty note, more performance-like than the 180 DTSi, and it goes pretty hard. While it won’t beat the 180 – it takes 5.9 seconds to 60 kph,1.2 seconds slower – it’s the quickest here. 108 kph is readily available, with another 5-odd kph if you’re going to play Redline Nazi. The extra travel in the suspension makes the ride quite smooth as well. The clincher is fuel economy. Steady low-speed riding will return 47 kpl, while lots of revs and banging shifts will drop that number to a still respectable 39 kpl. Between the three, it’s easy to see that the Avenger is the class of the field. It isn’t an exceptional motorcycle, but it certainly is head and shoulders ahead of the two other cruisers on offer.   And that’s before the price tag is dragged into the comparo. At roughly Rs 63,000 ex-showroom, the Avenger is about Rs 4,000 more than the full-options Enticer. The gain in power and torque over the Enticer is ludicrous next to the price and this choice is a no-brainer – although a 150cc Enticer at the price would really be, well, enticing. Similarly, the T’Bird is almost Rs 15,000 more, and come to think of it, unjustifiable to anyone except a dyed-in-the-wool Bullet enthusiast.

As for my big-cruiser demanding relative, well dude, you’re going to have to wait. Chill out, you’re young, only 30. You’ve got time...


First the Thunderbird. It’s been four years since this bike came out and it hasn’t undergone any changes, though that’s hardly surprising given the company it comes from. Anyway, the T’bird is a bit of paradox. It looks like a cruiser, and you can even ride it like one, yet it has the soul of a Fifties British sports bike and it really can’t hide that. It tries really hard, but sadly the age old frame and the mechanicals give the plot away. If you want an Enfield, the Thunderbird does make sense, but as a cruiser I would give this one a miss.

On the face of it, the Enticer doesn’t really stand up to the competition here. I mean, who would want a 125cc cruiser? But think of it as a 125cc commuter with cruiser styling and suddenly it seems to make sense. Unfortunately the price doesn’t, but if Yamaha were to do a quick rethink on this front, I believe they would have a winner.

The Avenger is the only one here which looks and feels exactly like a cruiser should. I liked it so much that after having spent fifteen minutes on it, I even thought of it as my commuting steed. Sometimes it’s nice to sit tight on a motorcycle, look cool and not be bothered about stuff like shifting weight in the corners and weighing down on your pegs. Besides, it’s not like you are riding in the TT or something. 30 minutes later I was bored stiff and I wanted to get off. Hmm.... maybe it’s me, not the bike.