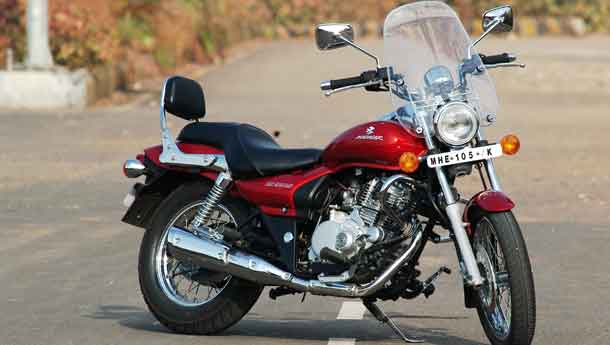 BAJAJ'S CRUISER HAS JUST GOT BIGGER

The anticipation to ride a motorcycle powered by Bajaj’s 200cc engine has been slowly been chewing up my insides. This, especially after Shumi mini-tested the Pulsar 200 while I was away and came back raving. Then Nandu, within a few days of that, got his hands on the not yet launched motorcycle and couldn’t stop talking about the sweetest Pulsar ever. He then went on to hound me in the following days about what I was missing. So here was my chance then – Shumi was away and there was a motorcycle powered by that much talked about 200cc motor up for test. Only this time, it was strapped into Bajaj’s cruiser, the Avenger.
Now, I’ve ridden the 180cc version of the Avenger more than a fair bit to know that Bajaj’s cruiser is quite a pleasant little er... cruiser. They started the cruiser culture with the EL 175, or the Eliminator, the Kawasaki-Bajaj motorcycle. That motorcycle grew into the Avenger – basically the then-top of the line Pulsar 180 DTSi engine bolted to the Eliminator chassis. There were minor tweaks, of course, to help the engine adapt to the cruiser characteristics of the motorcycle. So with the launch of the Pulsar 200 and the  flagship 220, it was just a matter of time before Bajaj gave the Avenger a shot in the arm. We reckoned it would be with the 220 motor, but the 200 it is.

Just like the last time around, the powertrain gets a few tweaks, with the engine now delivering 0.5 bhp less than the 200 and with torque down by just about 0.4 kgm. These are changes that are required so that the motorcycle feels less peaky and gets the more laid back, cruiser feel. Subtractions aside, additions to the Avenger include a small fuel gauge (No more ‘I ran out of fuel’ excuses for being late, then – Shumi) on the tank cluster, with more contemporary looking tell-tale lights. The rest of the motorcycle, unlike the Pulsar 200, looks as radically different as George Clooney after his eyelid surgery. If there’s anything different, I really can’t tell by staring at the bike, so I climbed on it and rode off.

We decided to go up one of the few remaining hillocks on the outskirts of the city to shoot the motorcycle, a place that a lot of regular BSM readers should, but will not, recognise. I don’t blame them. Anyway, the road’s still as delightful as ever and nowhere close to arrow straight, but we enjoyed it. And here’s why. The Avenger 200’s got the same 1475 mm wheelbase, but for some reason it feels like it wants to go around corners. The low CG makes the motorcycle so flickable, I can almost already imagine the local Mumbai biker mafiosi on their LED lit Avengers, zig-zagging through traffic. This cruiser belongs to the highway, but feels rather at home on the twisties. And if you’re worried about ground clearance, everything stays well out of harm’s way. The foot-pegs that do scrape the tarmac are foldable and have metal lugs on the ends to prevent the rubber from being chewed up by the road. Needless to say, I had a field day around corners and wore them out (sorry, Bajaj!). The suspension package remains the same for the 200 and just like the older motorcycle, the bike smooths over ripples and small bumps in the road, but thuds through the larger ones. The brakes see no change with the bump in power, but rightly so. Still sharp as ever, they have enough stopping power to cope with the 17.5 bhp.

But once you’ve stretched your already stretched legs and headed out on smooth blacktop, all is soon forgotten. The blurring scenery gushes by and the unadulterated joy of cruising at three-digit speeds, with the engine humming a muted tone, is just super. This engine isn’t as gruff as the others from the Pulsar family and feels a lot more refined and a lot less stressed too. Shumi was right all along, and Nandu will be forgiven. I’m beginning to regret not having ridden the Pulsar 200. This engine churns out torque rather low down in the rev range and is not as peaky as the others, which will make it a pleasure to ride in the city. The Avenger surges ahead smoothly, with a linear delivery of power, and the 0-60 kph sprint takes just 5.18 seconds, while it reaches 100 kph in 20.03 seconds – all of this without any fuss. Once the speedo gets to the ton, the needle begins to ascend less rapidly. This is a cruiser and so may not need that top end grunt, but the fact is that the engine seemed to be running a bit lean and the gigantic windscreen could have been slowing down the proceedings to the 114 kph top speed mark. The screen, although an accessory, isn’t the best of cosmetic touches for the motorcycle and the plastic screen was not true (objects distort when seen through the screen). The Achilles heel of the great engine package is the gearbox. Although shifts are quick and positive, finding neutral was not as convenient as I wanted it to be. But this again could be attributed to the fact that our test bike was fresh out of the box and had still to be properly run in.

That said, the Avenger 200 is the only proper cruiser available in the market. It’s no different visually from the last generation motorcycle, but it could (and should) have been. A few classic cruiser touches could have done wonders for it. Over the 180, the Avenger 200 is better put together and the overall build quality seems to have gone up a notch. Priced at Rs 65,943 (ex-showroom Mumbai), the Avenger is a whopping
Rs 4,500 over the 180, but for the well- tuned engine and the better build quality, not to mention the fuel gauge, it seems well worth it. Besides, if you’re staring down cruiser alley, the Avenger is the best value for money motorcycle in its class, unless of course you’re looking at spending close to a lakh on an old school Brit thumper. BSM