The pandemic-induced lockdown dented the first quarter (Q1) earnings at Bajaj Auto over the year-ago period, with volume revenue and profits declining 60 per cent. However, low fixed costs and better export realisations helped cushion the impact of operations on its margins.

Dragged down by poor volumes, which came on the back of a total shutdown in April and partial resumption of operations in May and June, profit before tax (PBT) and profit after tax (PAT) at the Pune-based firm more than halved to Rs 682 crore and Rs 528 crore, respectively, in the June quarter, against Rs 1,579 crore and Rs 1,126 crore in the year-ago period. This is the steepest contraction in profit seen by the company in more than a decade.

Revenue from operations during the quarter also fell year-on-year (YoY) by 60 per cent to Rs 3,079 crore, while the overall turnover saw 58.3 per cent YoY drop to Rs 3,417 crore.

The company’s overall volumes (including exports) fell 64 per cent to 443,103 units over the corresponding period.

Despite an abysmal volume show, the impact on margins for the maker of Discover and Pulsar models was marginal and not in the same proportion as the decline in volumes. The firm’s earnings before interest, tax, depreciation, and amortisation dropped to 14.3 per cent, compared to 16.1 per cent in the comparable quarter.

The margins were above Street estimates. “Bajaj Auto delivered strong operational performance, with its margins coming 430 basis points above our estimates,” wrote Arjun Yash Mahajan, head of institutional business at Reliance Securities, in a post-earnings note.

Alluding to the margins, Rakesh Sharma, executive director, Bajaj Auto, said: “There was little we could have done, given the demand scenario. Still to a great extent, our performance was resilient to the external factors.”

He attributed it to the company’s low break-even point for volumes and lower fixed costs. It helped the company negate the impact of a poor operating leverage. 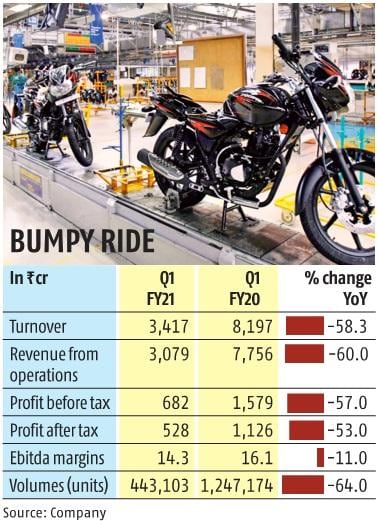 
Sharma expects the overall volumes, in both the export and domestic markets, to continue to gain in the months ahead and reach pre-Covid-19 levels by September. “The demand has recovered much faster than we had expected,” said Sharma.


But the recovery, he cautioned, could be derailed if there was resurgence in viral infection.


“The first 10 days of July was almost on a par with last year’s sales. But a lockdown in a few states, following an increase in the number of cases, has pulled down the numbers in the past 10 days,” said Sharma.


While the company has restarted operations, sporadic localised lockdowns are disrupting the supply chain and impacting the ability of the business to return to normalcy, the company said in a statement.