Bajaj Auto was down three per cent on worries that further adverse currency movement in key markets like Nigeria could hurt revenues and margins. Nigeria, which accounts for two-thirds of its Africa exports, is the largest export market for the company, with more than than a third of its volumes going to that country. Nigeria and other markets such as Egypt are important because exports constitute a major portion of the company’s revenues at about 45 per cent, and an even higher portion of operating profit — given these markets fetch better margins. In December, the company’s exports fell 12.4 per cent year-on-year (y-o-y) which the management attributed to low dollar availability in those countries. The situation, according to analysts, is expected to continue, hitting export volumes.

While the company resorted to price increases or split realisations with the distributor to offset the impact of adverse currency movements, analysts at Axis Capital say given macro demand issues in these markets – especially crude oil exporting countries – it would be difficult to protect margins. 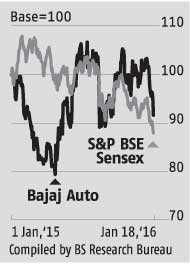 The rupee's depreciation against the dollar is a positive. However, the currency fall of some of Bajaj’s export markets against the dollar has been higher, making imports from India costlier. Moreover, as Chinese players are the biggest competitors, the weakening of the yuan is also worrying for Indian two-wheeler makers such as Bajaj Auto.

Given the flattish volume performance in the quarter ended December, price cuts in export markets and the falling share of three-wheelers in the product mix, the company’s top line growth in the December quarter is expected to see a fall, believe analysts at HDFC Securities.

What has helped the company offset some weakness is improvement in domestic volumes, up 17 per cent y-o-y in December. While the newly-launched Avenger – grossing volumes of 20,000 units a month (last year 3,000 units) – has helped, the company is banking on a mid-February launch of a motorbike in the executive (commuter) segment to boost volumes. The management expects domestic volumes to move up from the current 143,000 units a month to about 180,000 units going ahead. Analysts, however, say it is a tall order to expect volumes to jump to that level and expect a more realistic incremental increase in volumes of 15,000-16,000 units.