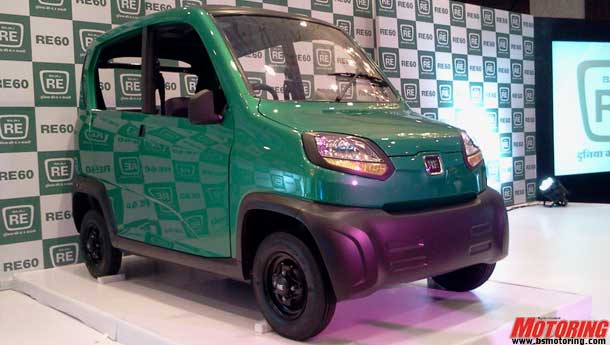 Buoyed by the local auto rickshaw drivers' response, Bajaj Auto is expecting to substitute 15-20 per cent of the current three wheeler model with its upcoming four wheeler RE60 variant in Ahmedabad. One of the largest manufacturers of three wheelers, Bajaj Auto saw considerable response from rickshaw association and government alike.

"We currently sell about 4,000 three wheeler RE per month in Ahmedabad. However, we received positive response from end users when we showcased our four wheeler variant RE60. Potential customers such as. auto union leaders and auto drivers, were of the view that RE60 has all-year round weather protection, which works better for them and their customers. Hence, we may see around 15-20 per cent substitution of the three wheeler model by four wheeler RE60," said CK Rao, Vice President - Commercial Vehicles, Bajaj Auto Ltd.According to Rao, the auto rickshaw union leaders agreed that RE60 is an opportune source of employment as it will enhance earning potential with its low cost of ownership and usage with great fuel-efficiency and low-maintenance.

"We were happy with the outcome of our efforts in the form of RE 60 and response from the potential customers and government officials in the Gujarat state. We believe, we have an excellent solution for the mobility challenges arising from the rapid urbanisation of India and states like Gujarat. The vehicle presents a small, simple solution to combat pollution and inflation. It does not need investments in infrastructure, does not need subsidies and does not need time," Rao added.

Aimed at public transport, Bajaj Auto is planning to launch the variant in next few months in Gujarat. To be marketed as an alternate for the three wheeler auto rickshaw, the four wheeler RE60 offers a small footprint – nearly the same as our auto rickshaw.

"The whole idea of the concept behind a four wheeler auto rickshaw is to do something about traffic congestion. We are also showcasing it to the central as well as state government so that we would also have a good policy towards public transport. Since, it is a four wheeler offering 2+2 or 1+3 seating capacity, we are hoping for somewhat different tariff rules than that of the three wheelers," said Rao.