Two-wheeler major Bajaj Auto put up a better-than-expected performance in the December quarter, driven by an uptick in exports, favourable exchange rates, and better product mix.

Exports — accounting for 43 per cent of volumes — rose 7 per cent, which helped offset the slowdown in the domestic segment. Domestic sales fell 13 per cent, largely on account of the sharp 16 per cent drop in motorcycle sales.

The firm expects to maintain the pace of sales growth in the exports segment. Exports in the quarter were driven by the motorcycle segment, with strong demand from Nigeria and East Africa.

While the company expects incremental revenues from 16 new markets including Philippines and Cambodia, the revival of exports to Egypt will also be a boost. The company started sales of three-wheelers in Egypt from January, which should help improve the three-wheeler export volumes that fell 13 per cent in the quarter.

Even in the domestic market, there are a couple of tailwinds in the three-wheeler segment. The management, along with some brokerages, believes that in the small commercial vehicle segment, there could be a shift from four-wheelers to three-wheelers, given the higher cost of BS-VI transition.

The cost of smaller commercial vehicles or pickup trucks below the 1-tonne carrying capacity could see a 15 per cent impact, compared to 11 per cent for three-wheeler cargo vehicles. Even the passenger segment should benefit from policies of various state governments.

In addition to exports, the takeaway from the quarter was gains on the profit margin front. Operating profit margins rose over 160 basis points (bps) to 17.6 per cent, the highest profitability level in seven quarters. These came from favourable forex movement, higher share of the three-wheeler segment, and margin-accretive new launches. Majority of the gains came from lower raw material costs, which fell 250 bps to 69.9 per cent of sales.

Implementation of BS-VI norms has led to a sharp price increase; the company will stop manufacturing BS-IV vehicles over the next couple of weeks. While the company indicated that there has been some pre-buying of BS-IV vehicles — which is a positive — analysts believe there could be postponement of purchases. 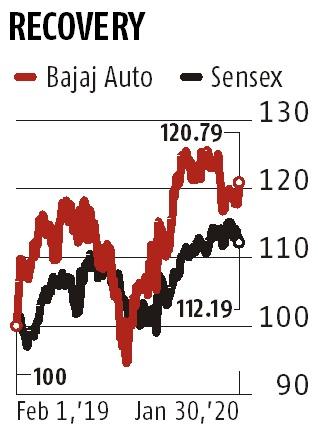 Domestic sales over the next couple of quarters could see the impact of the transition, and therefore be on the slow lane. While the company has maintained that its pricing would be sustainable and competitive, any price war during the transition would jeopardise margin improvement.

The other negative for the stock is its valuation. At 16.7x its FY21 estimated earnings per share, the company is trading at a 34 per cent premium to larger peer Hero MotoCorp.

Given the uncertainty on the volume front, especially in the domestic segment that accounts for majority of sales, as well as the valuations, investors should await a consistent pick-up before considering the stock.