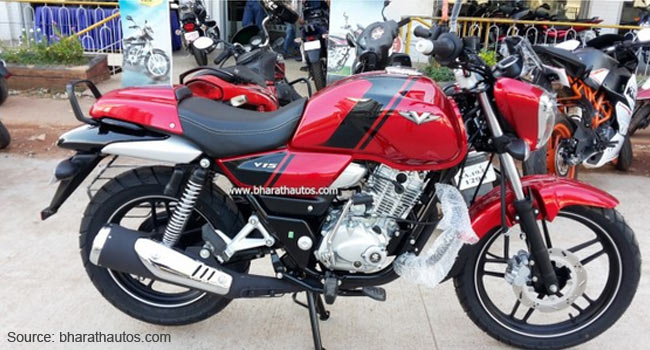 The company had initially launched the motorcycle in two colours - Pearl White and Ebony Black. Now in an attempt to attract more buyers, the new colour has been introduced. However, the price of the Bajaj V15 remains unchanged with the inclusion of the new colour.

While the earlier Ebony Black and Pearl White V15s have red decals across the motorcycle, the new model gets complete Wine Red paint job with black decals across its bodywork. No other changes have been made by Bajaj Auto on the iconic V15 motorcycles.

The Bajaj V15 is powered by an all-new long stroke single-cylinder, air-cooled 149.5cc engine which produces 12PS at 7,500rpm and 13Nm of torque at 5,500rpm. The engine is mated to a 5-speed gearbox. This gives the V15 a top speed of 110kmph and a fuel economy of 50kmpl. The V15 competes with other commuters like the Yamaha SZ-RR and Honda CB Unicorn 160.

The V15 from Bajaj Auto owes its fame and popularity to INS Vikrant aircraft carrier. Fuel tank of the V15 is made from scrap metal derived from India's warship. Bajaj has developed the V15 motorcycle as a tribute to the pride of the Indian Navy.