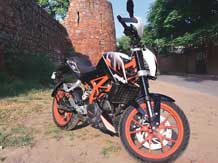 The unconventional design and the bright war paint of KTM Duke 390 reminds me of the former tennis world No 1 Gustavo Kuerten of Brazil. Like Guga, as he was known, the Duke 390 packs a punch and leaves you mesmerised by the power on display. But unlike the Brazilian, it seems Bajaj's motorbike is poised to rule the world for a longer period.

Bajaj has stuck to its successful formula of launching similar-looking motorcycles so that its sporty urban DNA remains intact despite the distinctions among the bikes. Hence the 390 looks virtually the same as the Duke 200 apart from the bigger tank, lower seat and the body graphics, so much so that even as you manage to turn people "orange" with envy, a question you will regularly face is, "Is this a new variant of the Duke 200?"

Speed junkie
The 375cc liquid-cooled, single-cylinder engine is not your everyday powerhouse that looks impressive on paper but turns out to be a wimp on mean street. With 43 HP at your disposal, you won't even realise the bike is now cruising at a three-digit kmph reading. Heck, even surpassing 150 kmph is a breeze. But you have to get used to its high revving nature and this is where the ace in the pack - the six-speed gear box - plays its role. Even though the power is fairly evenly distributed, riding the 390 below 2000-2500rpm can be a drag as the bike becomes angry and demands more revs. This means that day-to-day commuting during peak traffic hours will be a pain as it is plainly against the bike's true nature. Since it is not your everyday aam aadmi two-wheeler, it smoothly makes the transition to funland at the 3500-4000rpm range. If you are looking to flirt with the "are you crazy level?", then you will find the 390 at its happiest when you push it past the 6000rpm range. If you find that the engine heating up, don't worry. It can be a bit bothersome at low speed, but that is nothing to be anxious about.

Riding the roughs
The Duke 390's suspensions do a reasonable job of taking in the bumps. Though it is stiffer than most home-bred motorcycles, the ride never gets uncomfortable or bone-jarring. The 390 tames turns like no other bike does. The Metzeler Sportec M5 tyres provide so much confidence and grip that weather and road conditions become secondary. To quantify the quality of its tyres, a pair costs Rs 24,000. The chassis too ensures that the bike is razor sharp in the handling department. As the seat and the handles are lower, seating too is a lot more comfortable, especially over long rides.

The 390's braking system is top notch and is one of the best in the segment. It comes with ABS which kicks in at the right time, without robbing you of the buzz at inappropriate junctures. There is absolutely no lag when you apply the brakes - they are sharp and responsive.

Today's machine
The KTM Duke 390 delivers on its promises on all counts. There is no pretence at anything other than what it is - a bad boy's bike. The 390 is better than the Duke 200 in every department. The engine is extremely responsive as it brings back the old-school 2-stroke virtue. The best thing about the 390 is that it isn't taxing or demanding like the 200. It is India's first affordable super bike and while you pay much less than another of its kind, you are not compromising on anything. The waiting period is only three months, so your patience isn't tested either.