Back from the mountains 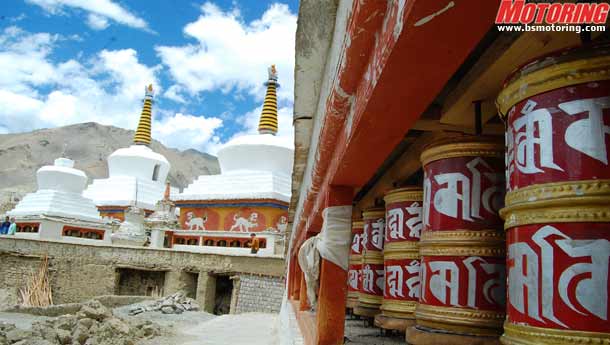 Splitting headache with severe pain in patches in the head, fever that could cook food all over again, bloody nose and a mucous membrane that threatened to liberate itself from my body… welcome to high altitude syndrome or whatever people call it. I have been to the Himalayas on seven occasions and the altitude never hit me the way it did last week as we attempted a unique feat in Indian motoring journalism. Sneak pics are doing the rounds on Facebook, in case you are really impatient and don’t want to wait for the September issue to hit the stands.

But that is not the point. Despite the odds, the Delhi-Manali-Leh road trip is one of the most amazing journeys mankind can undertake today. Stunning mountain passes that start at 10,000 ft and go up to 17,000 ft, roads that range from two-lane billiard-table black-top to heaps of rubble that can barely allow a single vehicle at a time – this, the road  to the magical city of Leh, has it all. Then the weather adds a bit of its own as melting snow causes sporadic landslides that test man and machine. Whether you are a born again motorcyclist who thought of ‘hitting the mountains’ for fun or the serious driver who invested in the best all-wheel drive machine and Caterpillar boots to go with it – there is adventure to be had aplenty. And guess what, there are numerous places on the way where there is no room for error. Places where unnecessary torque can cause your best-in-class SUV sliding down to oblivion or lack of torque that can torture your hatchback struggling to cross the freshly revealed river bed.

First Rohtang proved its toughness with a landslide, and then we had to encounter more of the stuff on the way to Baralachla. And then there was Sarchu – at 12,000-odd feet, it is above Leh and circumstances forced us to stay put in tents – a move that proved disastrous for those of us who were going through acclimitatisation issues. The vastness of More Plains threatened to swallow our machines and the mightiness of Tanglangla proved imposing yet again.

Protesting body organs starved of oxygen, cars that barely made it to the destination… why do we do this stuff? Road testing? You can call that and call us mad behind our backs. But the job needed to be done and it was done. Then we went and ate some sumptuous German Bakery breakfast and hired motorcycles and rode around Leh.

Diamox tablets did you say? Those are for wimps.