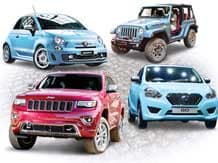 This year saw the launch of more utility vehicles than any previous year, and 2014 will be no different. At least 10 new utility vehicle and van model launches are scheduled next year by companies such as Honda, Renault, Maruti Suzuki and Fiat. In 2013, as many as 13 products, including face-lifts and limited-edition utility vehicles and vans were launched, though demand for these fell short of expectations.

During January-November, sales of utility vehicles and vans stood at 693,098 units, a rise of 0.5 per cent against the 689,420 units sold in the corresponding period last year. Mini sports utility vehicle Ford EcoSport was the sole model that saw a robust response, to the extent that the company had to close bookings for the model.

In 2013, the passenger car segment was hit the worst. Sales fell 10.3 per cent to 1,674,450 units in the January-November period, against 1,867,176 units in the year-ago period. While demand for sedans declined, that for hatchbacks remained flat. New hatchbacks such as Datsun Go, Tata Falcon (code name), New Maruti A-Star, new Honda Jazz and Ford Ka will debut next year. This is in addition to the various face-lifts and special variants planned. New sedans such as the Hyundai compact saloon and the Tata Falcon 5 (codename), along with facelifts of the Ford Fiesta and the Fiat Linea, will also be introduced.

Next year, the general elections, backed by continued product development and new launches, are expected to lift the buying mood.

The industry is also clamouring for incentives from the government. Karl Slym, managing director, Tata Motors, said, "It is up to us to continue to support the industry in lobbying at the government level to recognise the power of the auto industry for GDP (gross domestic product) and the economy and really hope it can take some steps to incentivise the industry. We will continue to spend on new products; we must not let that stop, and then hope to have some support from outside. But economically, most of us are not seeing a major change until after next year's elections."

Meanwhile, luxury car sales have been fairly robust, as companies such as Mercedes-Benz, BMW and Audi launched smaller-sized cars and sports utility vehicles. This opened a new, sub-Rs 25 lakh segment, with people rushing for every available model.

Eberhard Kern, managing director, Mercedes-Benz India, said, "We are expecting demand for smaller luxury vehicles to remain upbeat next year. So, we are predicting a double-digit growth next year, too. We will close this year with 30 per cent growth."

With banks having tightened lending norms due to the rise in non-performing assets, loans to the commercial vehicles sector have been hit. A significantly high number of commercial vehicle buyers opt for financial support from banks. Automobile manufacturers feel a revival in the demand for commercial vehicles, which has seen a drop of 50 per cent in the last two years, will depend on macro-economic issues. The slowdown was felt in the two-wheeler segment, too, though companies in this space escaped contraction. Next year, Hero MotoCorp, Honda, Bajaj Auto, TVS Motors Yamaha, Mahindra Two Wheelers, Hyosung, etc, are expected to record launches across segments - from automatic scooters to superbikes.

KEY FEATURES OF 2013
| In the Union Budget, the Centre raised excise duty on SUVs from 27% to 30%
| A new, sub-four metre SUV was introduced
| Increase in diesel prices led to demand swinging back to petrol models
| A good monsoon helped lift demand in rural areas
| The sector witnessed the highest discount levels in recent times

EXPECTATIONS FROM 2014
| Rural demand will remain in focus
| With interest rates remaining high, vehicle sales will remain weak.
| Two-wheelers are expected to bounce back
| New models in the utility vehicle segment set for launch
| All companies will increase vehicle prices in January