Representative Image of a battery

The Exide Industries stock is down 16 per cent over the last month on weaker-than-expected December quarter results, competitive pressure, and a weak auto outlook. One of the Street’s concerns is the ability of the company to improve its operating profit margins, which came in at 12.5 per cent for the December quarter. While this was higher than the 12.4 per cent recorded in the year-ago period, it was lower than the 13.3 per cent estimated by analysts.

Despite lower lead costs and cost-cutting efforts that helped the firm achieve its highest gross margins in the last six quarters, the same did not trickle down to the operating profit margin. The reason for the same is the slowdown in sales of auto makers, which led to falling operating leverage and, as a result, lower margins for Exide.


Given the slight increase in lead prices over the last month, the ability of the company to maintain margins will depend on the extent of hikes it takes.


Among other reasons for the pressure on the stock is growth of the automotive replacement battery segment. While growth in the business is steady, the weak volume trends across various auto segments could rub off on Exide’s replacement business. 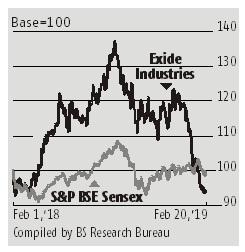 Analysts at Nomura expect industry growth to slow down from 10 per cent in FY20 to 6 per cent in FY21. They, however, believe the company will grow at 8-10 per cent over the next two years, given market share gains from the unorganised segment.


The company is also expected to face competitive pressures from rival Amara Raja, which is increasing its four-wheeler capacity by 35 per cent over the next two years.


In the industrial segment, too, there are challenges, especially the back-up segment that accounts for half of the segment’s revenues.


Given that the power situation continues to improve and the government is looking at uninterrupted supply with penalties for distributors, this segment could see a structural downtrend for Exide.


There are, however, opportunities in the solar battery and e-rickshaw segment that could offset some of the volume pressures in the power back-up business.