Auto sales bounce back in August on low base effect, pent-up demand

Signalling sharp recovery, automobile sales for most companies in India rose at a brisk pace in August over the same month last year, shows the data released by a clutch of companies on Tuesday.

MSIL’s domestic sales saw year-on-year (YoY) jump of 20 per cent in August, the car market leader said on Tuesday. During the month, the local arm of the Japanese carmaker despatched 116,704 units over 97,061 units a year ago.

HMIL, the second-largest in the pecking order, too, saw despatches go up significantly.  The maker of Creta and i20 models sold 45,809 units, up 20 per cent YoY, the company said. This is the highest volume reported by the Korean carmaker since January 2019, when it sold 45,803 units in the domestic market.


Even as sales are showing an uptick, carmakers are not celebrating yet.  “We would like to carry on with cautious optimism since uncertainty still surrounds the pandemic,” said Tarun Garg, director–sales, marketing and service at HMIL.

He attributed the good show in August to a relatively low base of last year, when the company sold only 38,205 units. He also credited it to the newly launched models, including the Aura, Tucson, Grand i10 Nios — all of which have been received well.

Subrata Ray, senior group vice-president at ICRA, said the sales are being driven by rural demand as well as inventory restocking at dealerships ahead of the festive season.

For MSIL, the increase — the sharpest in almost a year — came on the back of last year’s low base and brisk demand for models in its mini and compact segment. Albeit on a low base, sales in these segments advanced at a fast clip of 94.7 per cent and 13.4 per cent, respectively.  The company has been a beneficiary of the growing preference for personal transportation amid the pandemic. 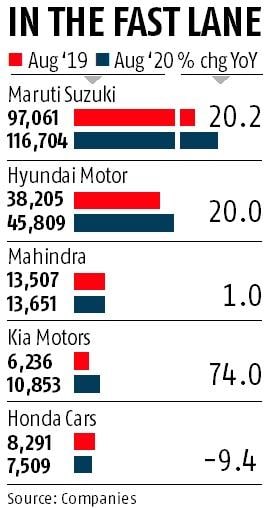 Mahindra & Mahindra’s (M&M) passenger vehicle (PV) segment — that includes UVs and passenger cars — was a saving grace and helped offset some decline in the overall auto sales.  It saw despatches grow 1 per cent YoY to 13,651 units.


UV major M&M, too, benefited from the month-on-month recovery in demand and improvement in supply chain-related glitches. Snapping a declining streak, the company saw moderate increase in its PV sales.  It grew by a per cent to 13,651 units over 13,507 units a year ago.


“We have been able to meet the uplift in demand by managing supply-chain challenges and going forward,” said Veejay Nakra, chief executive officer, automotive division, M&M.