After a substantial increase in advertising spends during the financial year 2016 (FY16), top automobile companies slowed down expenditure on expanding visibility last year. Some have also cut down spends, especially two-wheeler makers like Bajaj Auto and TVS Motor. The trend is expected to continue in FY18. The only significant increase in ad spends in FY17, a double-digit growth, came from the country’s leading carmaker Maruti Suzuki.

The advertising spends reflect the sales performance and is also impacted by new product introductions. FY17 happened to be a challenging year for the two-wheeler makers, especially in the domestic market. After a double-digit growth during the first half of last year, the two-wheeler makers faced a sudden challenge owing to the demonetisation in November, when the government withdrew currency notes of Rs 1,000 and Rs 500 denominations from the market. The cash crunch in the economy hit sales, especially in rural markets where most transactions take place in cash. Another impact came in March this year, when the Supreme Court banned sales of BS-III emission norm two-wheelers from April 1.


For the whole year, two-wheeler sales grew only at 6.89 per cent, helped by an 11 per cent growth in scooter sales. Hero MotoCorp, the country’s biggest two-wheeler player, saw its domestic sales grow at a per cent to 6.48 million units in FY17. The company spent Rs 767 crore on advertisement in FY17, 6 per cent higher than FY16. But its peers, Bajaj Auto and TVS Motor reduced spend. 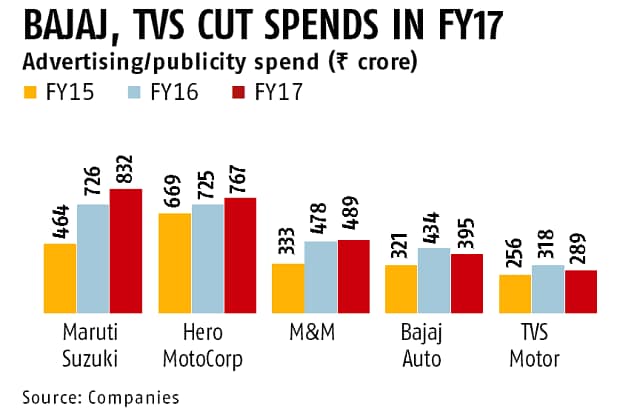 Pune-headquartered Bajaj Auto spent Rs 395 crore on advertisements during FY17, against Rs 434 crore in FY16. Its two-wheeler sales declined 4 per cent to 3.21 million units last year, owing to a drop in export sales. It has not been able to grow sales in the first four months of the current year. The company did not respond to queries on the drop in ad spends and the outlay for the current year. TVS Motor also trimmed spends to Rs 289 crore from Rs 318 crore in FY16, even though it had grown sales.

Sport utility vehicle and tractor major Mahindra & Mahindra had expanded its advertising spend by a steep 43 per cent in FY16 to Rs 478 crore (standalone). Spends in FY17, however, increased just about 2 per cent to Rs 489 crore. The company’s utility vehicle sales in the domestic market were flat at 236,130 units during FY17. M&M did not comment on its ad budget for FY18. In the first four months of FY18, its utility vehicle sales have been flat.


For all these companies, advertising is also a function of new product launches. “Many of these do not have any major launches lined up for this year. Some increase could come from the auto expo in February next year,” said an analyst tracking the industry.


Maruti Suzuki spent Rs 832 crore on advertisements in FY17, an increase of more than 14 per cent compared to FY16. It is expected to see a further increase in FY18 owing to launches like new Dzire and the auto expo.