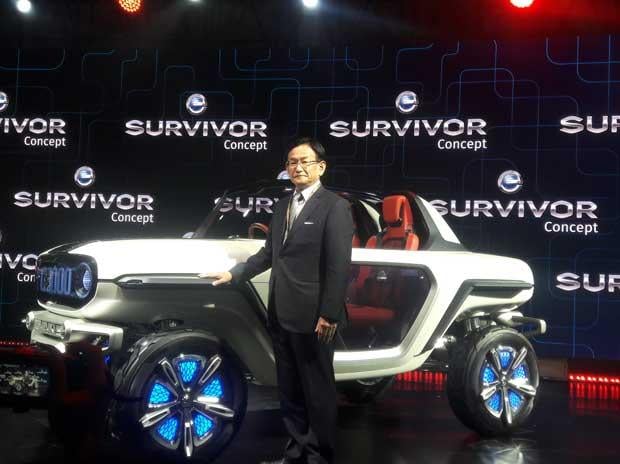 The Indian automobile industry on Wednesday showcased its vision for an all-encompassing electric-powered transport solutions at the pre-open day of the Auto Expo 2018.

Besides, the rush of unveilings and new product introductions, the event also saw the entry of brands -- Kia Motors, Kawasaki and BMW Motorrad - in the Indian market.

The 14th edition of the "Auto Expo -- The Motor Show" 2018 will be opened for the public from Friday. On Wednesday, 22 exhibitors unveiled over 65 products and launched 14 new offerings.

Unveiling the ConceptFutureS, Kenichi Ayukawa, Managing Director and CEO, Maruti Suzuki, said: "Our designers have created this brand new design, aggressive on the outside, and bold and inviting interiors.

"Nothing like this has ever been attempted before on a vehicle this size. ConceptFutureS will define the next generation of design for compact vehicles in India."

It also announced the launch of nine new models, including an EV in the Indian market by 2020.

In the commercial vehicles segment, the company introduced a compact truck "Tata Intra", which was unveiled by the company's brand ambassador and Bollywood actor Akshay Kumar.

Apart from its electric vehicle portfolio, the company also unveiled India's first convertible SUV "TUV Stinger" and SsangYong Motor's new G4 Rexton, which will be launched in India with an all-new brand name.

High-end automobile manufacturer Toyota Kirloskar Motor unveiled the "B-High" segment car "Yaris" which is seen as its most anticipated launch this year.

"Today we announce three of those models - All New Amaze, All New CR-V and much awaited 10th Gen Civic which will be launched in India in FY 18-19," said Hachigo. The company debuted its second generation Amaze.A

In the two-wheeler space, the Auto Expo 2018 saw the official entry of Kawasaki into the Indian market.

Other manufacturers such as Honda Motorcycle and Scooter India unveiled a total of 11 two-wheelers, including a new 160 cc motorcycle "X-Blade".

"The new scooter range -- Maestro Edge 125 and Duet 125 -- will be introduced in the market by the second quarter of FY19, while the on/off road bike XPulse will be launched ahead of the festive season to delight the thrill-seekers in India," Hero MotoCorp said.

Suzuki Motorcycle India unveiled a 125 cc scooter "Burgman Street" along with the introduction of the GSX-S 750 bike at the Expo.

"The Burgman Street is scheduled for a launch in 2018," the company said in a release.

Mercedes-Benz launched its Maybach S 650 and teased its E-Class All-Terrain model for its upcoming India debut.

On the group level, BMW unveiled the next-generation of all-new MINI Countryman which will be locally-produced at its plant in Chennai.