Auto Expo ends, next one may move out of Pragati Maidan 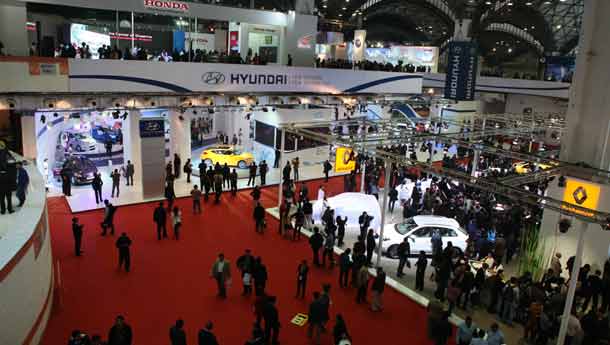 The curtains came down on the 11th Auto Expo today, with organisers mulling to move the next edition of the biennial trade show out of Pragati Maidan to a more spacious 'world-class' location so that it can become the largest in the world.

The organisers— the Society of Indian Automobile Manufacturers (SIAM), Automotive Component Manufacturers Association (ACMA) and Confederation of Indian Industry (CII)— are also mulling over hosting the event on February 5-12, 2014. Traditionally, the auto expo has been held in the first week of January.

"This time, we witnessed about 700,000 people visiting the Auto Expo, that included the exhibitors. We had to cut the number of people due to security and infrastructure issues," Auto Expo 2012 Steering Committee Chairman Rajive Kaul told reporters here.

The organisers had decided to restrict the number of people present inside the venue to one lakh daily, including 30,000 people from the exhibitors' side.

With over two million visitors at the 2010 Auto Expo, the organisers had claimed that India's auto show was the second-largest after the Shanghai auto show.

Kaul said the organising committee is exploring alternative locations to hold the next expo, which will offer better infrastructure to the exhibitors as well as public.

On holding the show for the first time in February, Kaul said: "We want to organise it in sync with global shows like Detroit. So we are fixing the dates according to the international calendar."

As many as 1,500 exhibitors and 50 global brands from 24 countries participated the show, which witnessed 58 new launches, including the much-awaited Mini, and the unveiling of nine concept and 12 green vehicles.

However, it was not a smooth ride all along as many business leaders, including Anand Mahindra, criticised the poor crowd management at the show, saying the week-long event was a "serious business" and not just a "tamasha".

Elaborating on the future venue, ACMA President Arvind Kapur told PTI: "We are seriously looking at two to three options such as Gurgaon, Noida and a location near the international airport. Accordingly, the style of the show will also be different."

He said ITPO, which manages the Pragati Maidan, have plans to renovate some of the exhibition halls and it may lead to further squeezing of space.

"This Auto Expo is the second-largest in the world. We could have been the largest, but we had constraints of space and infrastructure. We, in fact, cut the space this time," Kapur said.

The Delhi Auto Expo can grow twice the rate in size and participants if it gets space and proper infrastructure, he added.

Talking about the contributions of the auto industry, Urban Development Minister Kamal Nath said: "This sector is an index of economic health of the country. If we see the last seven days, who will say that there is a problem (in the Indian economy)?"

The huge number of launches by global players is a testimony to the Indian economy's strength in difficult times, he added.

"India is adopting and adapting the challenges which globalisation has brought in," he said.