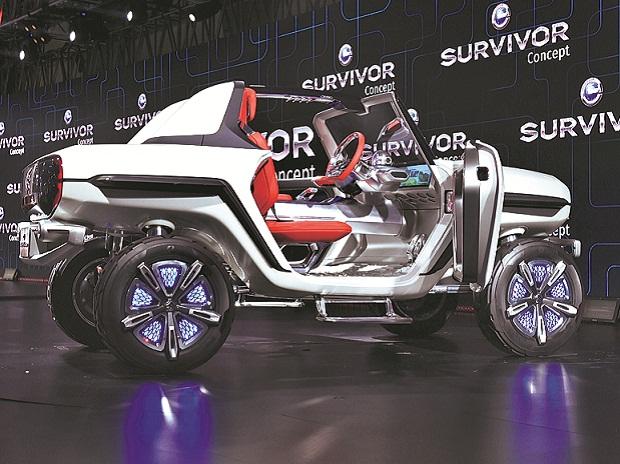 Maruti Suzuki’s e-Survivor concept: The vehicle will be launched in India in 2020 as the company’s first electric vehicle. Photo: PTI

In line with the government’s policy push to have an all-electric fleet by 2030, automobile majors unveiled a host of eco-friendly models on the inaugural day of the five-day Auto Expo on Wednesday. Concept cars and ready-to-launch models powered by regular internal combustion engines also vied for attention.

Companies unveiled 65 new vehicles/concepts and launched 14 products across segments on the first day.


Setting the tone, domestic car market leader, Maruti Suzuki, unveiled an electric concept car, e-SURVIVOR, which it plans to develop locally and launch by 2020. It also showcased the working model of a hybrid vehicle.

Hyundai Motor India, too, showcased electric and hybrid variants of its IONIQ sedan, which is being sold in many global markets. The local arm of the South Korean automaker will launch an electric car in India in 2019, imported in a completely knocked down form to test market readiness. Hyundai will be the first global car maker to do so. “At this Expo, every player is highlighting electric vehicles, eco-friendly products and concepts. This is the main difference with the 2016 Auto Expo," said YK Koo, managing director and CEO, Hyundai Motor India. The company launched the next-generation Elite i20 on Wednesday, with a starting price of Rs 534,900.

Maruti also showcased its Concept Future-S, a compact vehicle with an SUV stance. Designed in-house by the company, the car epitomises the next level of evolution and marks a step-up in Maruti’s design language.

Luxury carmakers, too, joined the green ride. While luxury car maker Mercedes Benz showcased the Concept EQ, an all-electric vehicle, BMW showcased its plug-in hybrid electric vehicle, BMW i8 Roadster. The company said it planned to launch four new products in India in 2018 and one among them would be a hybrid.


Homegrown majors, including Tata Motors and Mahindra and Mahindra, used the green theme as an opportunity to showcase the future of mobility in India. 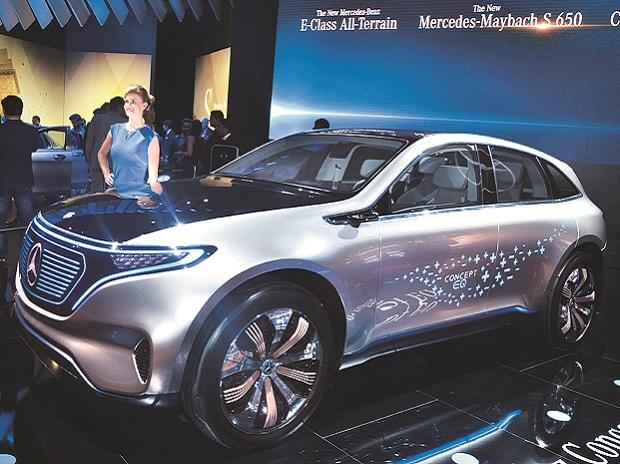 The Tata Motors pavilion, one of the show stoppers with the theme Smart Mobility, Smart Cities, showcased close to 25 vehicles, including six EVs and two new vehicle architectures for its passenger vehicle segment. Codenamed H5X and X45, the models are based on the company’s advanced modular platform. H5X is the first model in the Impact Design 2.0 language and will go into production next year. The model will compete against the Hyundai Creta and the Renault Captur, and is expected to bridge the gap between the Nexon and the Hexa. The company also has the Safari SUV in its line-up.

“Tata Motors is committed to future mobility with investments being made in the electric, passenger and commercial vehicles segments,” said Chandrasekaran.


Mahindra showcased its entire range of electric vehicles, as well as mobility solutions and concepts, from three-wheelers to buses. The company also displayed its futuristic range of products, including SsangYong Motor’s new G4 Rexton, the global SUV with Mahindra badging, which will be launched in India with an all-new brand name, the TUV Stinger, a convertible SUV.


Two-wheeler makers, too, showcased EV concepts even as they remained non-committal about commercial launches. While market leader Hero MotoCorp said it was in no hurry to showcase EVs, Honda Motorcycle displayed the PCX Electric Concept scooter, which was unlikely to hit the Indian roads soon. TVS Motor showcased its electric scooter Creon but did not give any timeframe for its commercial launch. Hero Electric, the country’s largest electric two-wheeler maker, unveiled eight electric two-wheelers and said these would be launched in a phased manner.

Bollywood stars Akshay Kumar and Ajay Devgn at Tata Motors and M&M stalls, John Abraham at the Yamaha stall, and cricketing legend Sachin Tendulkar at the BMW pavilion added to the glamour quotient.