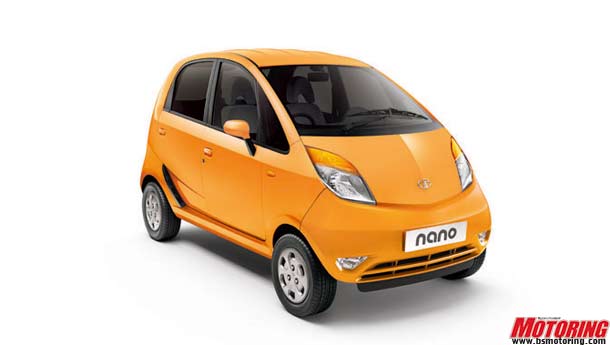 Tata Motors showcased a new version of their Tata Nano at the 2012 Auto Expo. This CNG powered variant of the Nano makes the car more green than it used to be. The Tata Nano CNG ought to be available soon, although an exact date for the launch of the same is not yet known.

However, speaking about the Tata Nano diesel variant that has been eagerly awaited, Tata Motors vice-chairman, Ravi Kanth declared that it was unlikely to happen at least of the next one year.


Admitting that Nano has 'wasted an early opportunity' due to teething problems, Tata Group chief Ratan Tata today said Tata Motors will do everything to undo the tag of 'poor man's car'.

In an interaction with media here, Tata, who is also the Chairman of Tata Motors, said: "Many efforts were made to discredit the product. We never pushed it (Nano) as a poor man's car, but as an affordable family car. Whatever stigma is there in the market, we will undo it."

Asserting that the very concept of Nano is a robust one, he said: "The launches of similar small cars by others vindicate our belief that this segment was missing in the product line."

He further added that Tata Motors was "not much in competition with others as far as pricing of it is concerned".

When asked about the problems Nano has faced, like the fire incidents and the recent replacement of starter motors, Tata said the issue was mainly due to various parts coming from different vendors.

"Current upgrade should help resolve the problem... upgrade will resolve issue relating to problematic supply from vendors. Upgrade will also resolve the earlier issues and also take in customer feedback. We will look at variants of models to move up the value chain," he said.

On a query on whether Tatas will go back to West Bengal again, Tata said: "I do not think our position has changed...As and when the hostilities are over and (if) we get an amicable reception, we will think of it."

READ OUR REVIEW OF THE ORIGNAL TATA NANO HERE>>