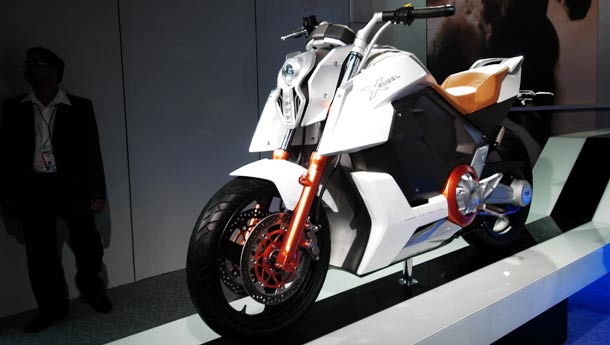 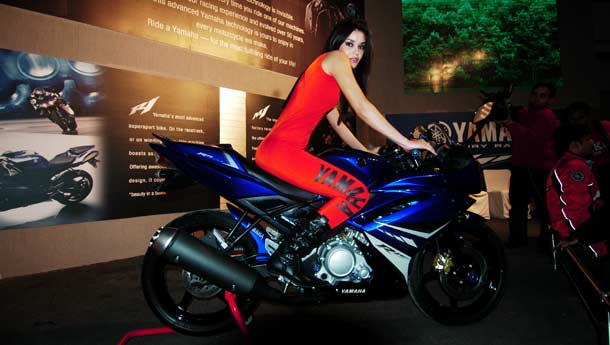 Most eco-friendly motorcycle
TVS’ X-Fossil looks like tomorrow, today. The motorcycle uses batteries and gizmos for motor-vation and wraps all of that up in a cool white skin that is shaped into, what else, an X. We love the copper coloured metal bits that abound as well as the vertical, aggressive headlamp treatment. A tiny digital dash is all you get by way of instruments and yes, we'd love to take one for a spin. The X-Fossil was flanked by the Qube, another modern looking electric bike, this time in the shape of a scooter with a squared off design theme. Too bad both had their thunder stolen somewhat by the Raptor, an aggressive looking step-through concept

Most exciting motorcycle
Yamaha finally returned to its performance roots with this, the YZF-R15. Yes, that’s the YZF-R1 lineage the motorcycle is calling up. The 150cc liquid-cooled engine is supposed to make in excess of 20 bhp, and the fully-faired, monoshock motorcycle is expected to go on sale in June. Yamaha will put on sale the first genuine, no-holds barred sports motorcycle in the country so far. Which also explains the presence of the R1, M1, RD350 and the RX100 at the Yamaha stall. We’ve only one crib. Why wait till June?

Unobtanium of the show
At the center of Bajaj’s KTM display was the astonishingly good looking SuperDuke, a 990cc V-Twin naked streetbike that’s stormed bastions all over the world. Having ridden one for the magazine sometime ago, we were hoping that the SuperDuke would be among the first KTMs to go on sale in India. We’ll just have to wait, it appears, since Bajaj are working towards launching the 690 SM supermotard and the RC8 sportsbike first, hopefully by June 2008.   Coolest motorcycle
The Honda CBF Racing Concept was almost hidden away in a corner of Honda’s motorcycle display, but it was cool enough to overcome that. Based on a Unicorn, the motorcycle features a lovely combination of carbon fibre body parts, a neat race fairing, a braced swingarm, large petal disc front brake, and look, twin rear shocks! Honda says the motorcycle is on display purely to judge reactions to its styling, but deep in our hearts, we want to ride one. And check out that very cool underseat exhaust.

Fastest motorcycle
This is the Honda RC212V, the motorcycle that American racer Nicky Hayden took to a nail-biting world championship in MotoGP. This is the fastest motorcycle of the show, having been clocked at nearly 330 kph in the restrictive confines of a race track. Yamaha did show the M1, the direct competitor, but that bike wasn’t as fast as this one in a straight line. If they started up this bike at the Auto Expo, its lusty bellow would drown out everything else going on at the show. The RC212V uses a 800cc V4 engine that produces in excess of 220 bhp

Most stylish motorcycle
Something undeniably cool happens when you connect motorcycles and aircraft. Maybe it’s the idea of freedom that is central to both. Suzuki created the Biplane with inspiration from the biplanes that were the norm in WWI, which explains the styling of the fairing. A V4 powers the concept, while innovative front suspension and lots of styling elements keep your attention from wandering. We’re still not convinced about the way the name is articulated on the motorcycle, though. Or for that matter, its turning ability on that yawning wheelbase. Then again, it’s a concept, a fantasy, so anything can play, right?