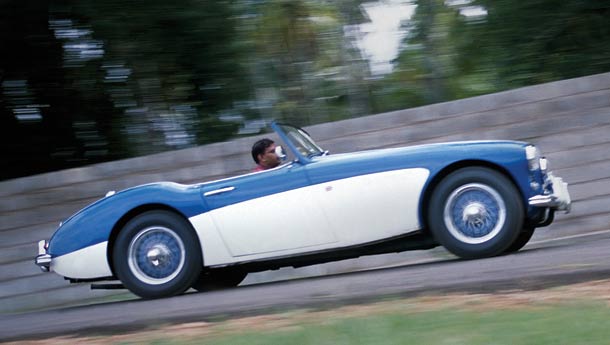 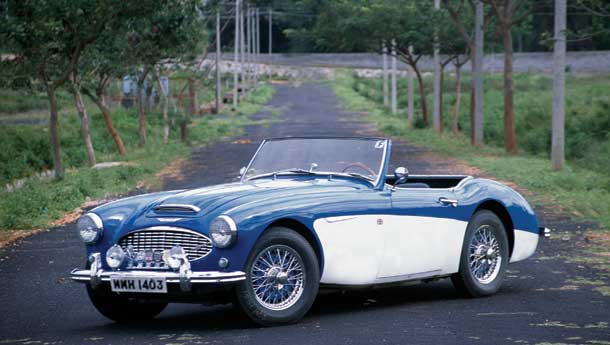 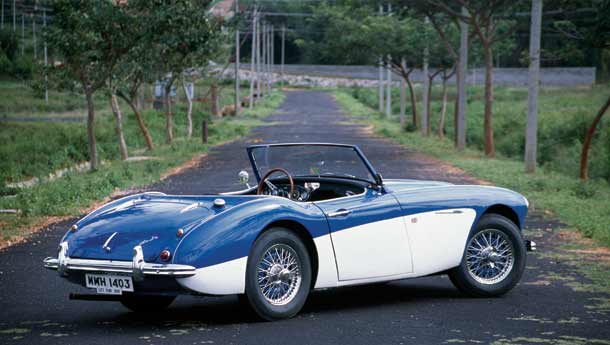 Ignorance is bliss. Driving a proper Austin-Healey 100-6, backed with good old naiveté and an absolute lack of research, was turning out to be as pure a motoring experience as I’ve ever had.

But fifteen minutes ago, I was a bit sceptical about how it would all turn out to be. Sure, I knew that the Healey was one of the greatest sportscars ever built. But the withered steering wheel that threatened to come off everytime I turned the car wasn’t doing much to boost my confidence. The notchy gearbox wasn’t helping matters either and my scepticism meant it felt as if I was being driven around rather than actually driving the roadster.

And as I turned the car in and floored the accelerator, the Healey jived over imperfections and I could feel the changing contact between the rear tyres and tarmac as they relinquished their partnership according to the throttle command.

The Healey had just pulled a manoeuvre that would have put the best of the Three Stooges’ antics to shame. The old dog certainly had some life left in it. Yet, as I later found out, the 100-6 was the least desirable of all Austin Healeys ever built (more on this later). Right now though, the Healey was giving me an experience that was totally unadulterated by corporate design committees or the whims of the marketing department. The harder I drove it, the better it reacted.

And even almost half a century later, this car was up for some serious action.The 2936cc motor up front was doing a brilliant job, completely flooding my senses with as many inputs as I could handle. The 117 bhp six-cylinder lump was making the car move as hard as it could entirely without distress. Built to make a little power go a long way – a gratifyingly long way – the Healey was rewarding me with an awesome sensation of speed. It might technically be a British car, but it was turning out be Italian in spirit because the thrills had a raw edge to them. Apart from the fact that it would have looked sensational in red, the sensations from my palms had made their way up to a boyish grin.

And then there was the weight. Rather the sheer brilliance of distribution. Something that was coming through all the reactions and not just its steering. This day, this car, this weather. Ladies and gentlemen, sports car heaven was attained.And to think this wasn’t the best Healey ever built. Ignorance certainly is bliss. So then which one was?  Well, let’s start at the top. It all started in the early fifties with a bloke named Donald Healey. Healey was a British race driver who had become a tuner and was earning some serious cred, thanks to his cars winning at Le Mans and Mille Miglia.Now, Donald Healey was also a shrewd businessman and he quickly realised that the Americans were taking a liking to European sportscars. However, their choices were limited to Triumph TR2s or Jaguar XK120s, both of which were at the extreme ends of the price range. The world (and America in particular) could have done with a serious enough, moderately priced sportscar and so he set to work. But even though he engineered the car, he needed to buy a few bits. Like an engine, a gearbox and brakes. British carmaker Austin agreed to sell Healey a 2600cc inline-four that powered their A90 Atlantic and thus the Healey 100 was born. The Healey 100 debuted at the 1952 London Motor Show where it was an instant sensation. The Healey delighted onlookers, one of whom went by the name of Leonard Lord. Lord happened to be the head of the gigantic British Motor Corporation (recently formed through the merger of Austin, Morris, et al) and was so impressed, he immediately signed a deal to build the car at the Austin works at Longbridge. The name of the car and badges were changed to Austin-Healey 100 midway during the show! Incidentally, it was the first car to be made under the BMC banner.   Called the 100, after its top speed, the Healey didn’t disappoint. With its four cylinder 2660cc, 90 bhp engine, the 100 was an absolute bundle of joy to drive. It was a sales success and won a fair amount of competition accolades too. In fact,the Healey was a big hit on the salt flats of Bonneville and a then unknown Texan, by the name of Carrol Shelby, notched up some impressive land speeds with it.

Three years later, the Healey was upgraded, not because the customers or the car demanded one, but because Austin had decided to stop making the A90. The Healey needed a new engine. And it got one from the Austin A105. This one was a six-cylinder 102 bhp motor. Problem was, it was designed to power family sedans from Morris and Wolseley.

On paper, the Healey had gotten beefier. It now had two more cylinders, two more wheelbase inches but only two more mph. It also had two more seats. It had a new suffix and was now called the 100-6. While this sounds like good news, in reality that wasn’t the case. To make the Healey more mainstream, the BMC blokes had given the Healey additional seating. But that led to the car becoming heavier by 125 kilos.

Consequently, for the motoring press, the 100-6 was turning out to be a disappointment. Firstly, the more powerful 102 bhp was half a second slower to 100 kph, while the additional seating had wrecked the dynamics. But hey, what do motoring journalists know? Besides, this particular 100-6 that belongs to Bangalore-based Dr Ravi Prakash comes with a Mille Miglia kit. Designed by BMC to take the power up to 117 bhp and performance to the next level, it was better than its predecessor.

As far as I was concerned, the Healey was turning out to be a hallmark of simplicity and having less meant doing so much more. I mean, it didn’t have traction control, or steam roller rubber or for that matter a seatbelt. None of the bits that a nineties kid like me would associate with a sportscar. The Healey was built singularly with the purpose of having fun and staying true to the expression of the heart and soul of a sports car in minimalist fashion. That it did in sensational style.   And style was one thing that the Healey had in abundance. The timeless clean lines of Gerry Coker’s design and the simplicity of the shape is an education in automotive design and embody the complete essence of British motoring. Those Rudge-Whitworth wire wheels with knock-off hubs look sensational in motion. And when stationary, single handedly make an ordinary car look charismatic. And a Healey without them, to me, is really no Healey at all.

With interiors to satisfy people who want dashboards like a Supermarine Spitfire, the Healey always seems stripped out for action. You sit a long way back with your bottom just above and ahead of the rear axle with a view ahead of a long bonnet between the peaks of the front wings. The broad steering wheel is thrust towards your chest, allowing you to put an elbow out, in classic British style. And even today, the engine was perfectly okay about being revved higher and faster till the rev counter hit the last number, with the masses of torque from the straight-six giving it the raw sports car appeal.

As a race car though, the 100-6 was still better than the competition. It won the 1957 Mille Miglia in the basic production version, while three factory machines took the constructors’ title at the 1958 Sebring 12 Hour race. It was also the car in which the first lady of rallying, Pat Moss (sister of Stirling) cut her teeth. With the Healey, she won her first Coupe des Dames on the gruelling Liege-Rome-Liege Marathon. But the 100-6’s biggest victory was in the 1959 Tulip Rally where the works team beat the likes of Aston Martin, Mercedes-Benz and even Ferrari.

The 100-6 was followed by the most glorious Healey of all time (See box: Austintatious ), but by the mid-sixties it had become truly anachronistic. And with the British car industry facing labour and quality issues, BMC was too busy to upgrade their cars anymore. Now remember, the Healey was built mainly for the American market. Almost 90 per cent of all the ‘Big Healeys’ that were built went to the United States. However, when the American pollution and safety norms came into force in 1968, the BMC didn’t even have a replacement. Ironic, isn’t it? A car that came into existence largely because of the Yanks ceased to exist because of them.

On the other hand, the E-Type was twenty years away from being a classic and was beginning to look ridiculously bloated. Similarly, the likes of Aston Martin, Jensen, Lotus, AC and Bristol were all building low volume and high priced supercars. In effect, the traditional British roadster saga that began with the Healey also ended with it. Twenty years later, though, the British roadster did make a come back. Only this time it was called the Miata.