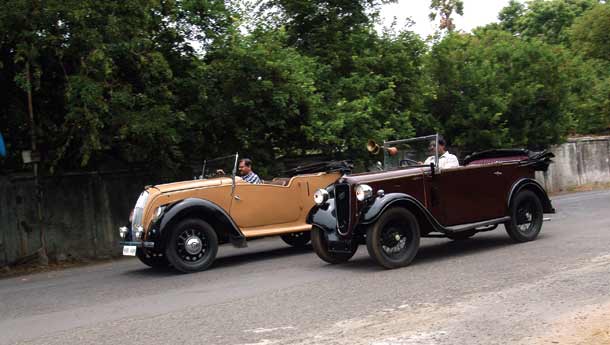 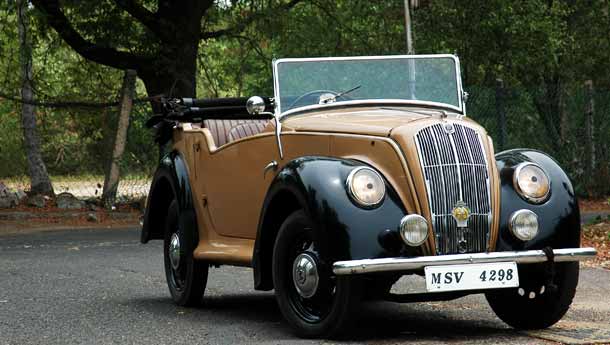 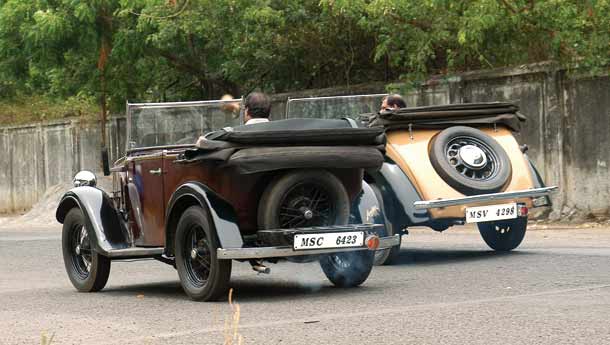 These cars were world cars even before the term became fashionable with manufacturers. Driving them around here in Chennai, I’m not surprised. I am in the Morris 8 Series E tourer, while S Srivardhan (a huge automotive buff who’s the district sales manager-cargo for Air India) is in the Austin 7, and both of us are going up and down innumerable times in his cars to give Param a double-pan shot. Since the SLR can take one iPod’s worth of full-res pictures, Param’s quite trigger-happy. So the two of us look as if we’re setting the Guinness record for the maximum laps done in tandem with two vintage cars made in Britain – if the category doesn’t exist, well, then we’ve just created it.


While we are at it,both the cars are at work, plodding around without complaining, ceaselessly attempting to set the record. Impressive, these little runabouts, they go about doing their duty with a single-minded purpose. Just like the people who built them, I guess – those ‘chin up, mustn’t grumble’ Britishers. In fact, these solid, sensible and well-built cars carry the names of their founders – Herbert Austin and William
Morris – both of whom were known for their capacity for hard work and determination. Both of them, by mass-producing affordable and reliable cars, can take the credit for the motorisation of the UK, and many other countries.   The reason the Morris and the Austin became so popular across the world is not difficult to understand. Even today, both their drivetrains feel gutsy and are fuss-free, while the underpinnings are tough enough to weather all sorts of roads and conditions. Want proof? The Morris 8’s smooth, sidevalve engine was the first one to be seen in that other milestone, the Minor’s engine bay, which made its appearance 10 years after the Series E 8 was launched. And reportedly, it was also used as an auxiliary engine in the tanks built by the British during the Second World War. The Austin 7, on the other hand, is considered the Ford Model T of the UK. It was even built under license by Rosengart in France (who made some fantastic roadsters based on the 7), Bantam in the US, and guess who else... BMW in Germany! It was the ex-aero engine maker’s first passenger car, and they badged it the Dixi. So if you think Beemers are God’s gift to mankind, make a pilgrimage to Longbridge, Birmingham.

The 7 was the brainchild of Herbert Austin, who went against existing trends by creating a small, affordable car for the masses. The creation of the 7 was kept so secret that Austin and his designer worked out of the billiards room in his mansion and developed the car. Herbert Austin’s gamble eventually paid off and the fortunes of the company turned around thanks to this diminutive runabout.

This money-spinner is as bare as it gets. And because the Austin is so compact, you end up getting intimate with your co-passengers – maybe that’s why it was also called the Chummy. The dash is extremely neat, with the mandatory gauges clustered together in the centre, but the ribbed, three-spoke steering wheel is rather large compared to the rest of the car. Unlike the Morris, the 7 is a rorty little number. Instead of showing its age (70-plus!), it’s eager to go. It was first introduced in 1922, with a 696cc four-cylinder engine, which over time, became bigger, not by too much of course. This one has a 747cc unit that develops just 12 bhp at 2600 rpm. Power goes to the rear wheels via a three-speed gearbox (a four-speed arrived later) that shifts with a mechanical, but faultless feel. Driving it, you don’t realise the horsepower is peanuts. But because the car’s lighter and the power arrives quite early in life, the small 7 is big fun. The ride may be a bit harsh for bottoms used to modern suspensions, but it’s not as jittery as other vintage cars I have driven.   Unlike the Austin, the Series E Morris 8 is much more placid. The 918cc inline-four develops 29 bhp at 4400 revs, but it is sedate, and not as excitable as the 7’s engine. It is, however, smooth and quiet and looks as if it can keep running like this till kingdom come. Mated to this engine is a four-speed gearbox that transfers power to the rear wheels and looks like it’s a life partner to the engine too. Obviously, it’s not exactly the car to be in when you’re in a hurry, and I think that Smiths speedo with 70 mph (112 kph) and a rated top speed of over 90 kph is still optimistic. I find it unexpectedly tough to steer, even though I am now a veteran of driving cars that believe you are not man enough unless you wrestle with the wheel. For a car of its size, the Morris rides quite well on its semi-elliptic springs and this could be one of the reasons why it was well accepted in many countries with no roads to speak of – read India. In fact, I know of a Series E saloon belonging to a Parsi gentleman which has been driven to Delhi from Mumbai and back, and before that went from Nagpur all the way to Sri Lanka and returned, and is still doing its duties faithfully with the family in Mumbai, including making its appearance at all vintage events!

The Series E nomenclature came about when Morris gave the 8 a complete visual overhaul, plus incorporated hydraulic brakes as well. The ‘waterfall’ grille, then a contemporary touch, was added and the head-lamps were faired in the wings – the first for a mass-produced British automobile! This tourer version – which is quite rare to come by – has a fashionable cut to its doors, good to rest your hands on while touring, I guess.

The Morris 8 soldiered on beyond the war till the legendary Minor replaced it in 1948, while the end of production of the Austin 7 coincided with the beginning of the war. Both these cars had given their respective manufacturers enough breathing time and the funds to start thinking about a post-war future. And they had lived a full life making many people mobile. Yes, they may not be world cars,but they did their bit to change the world.