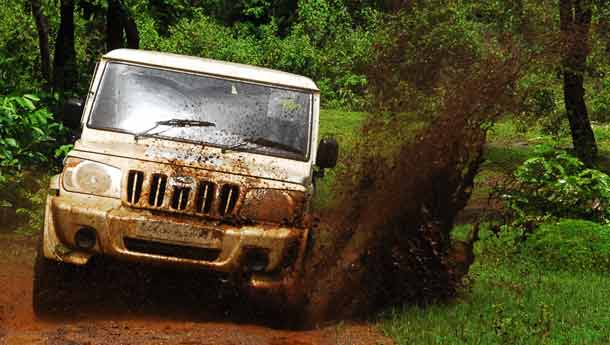 Its Mahindra’s shining star. Sales of the Bolero have never looked so good, and in this era of monocoque machines and stylish UVs, the Bolero is still going strong. Just what is the magic behind a machine that, in any other developed country, could be considered an anachronism? There’s a lot to it, actually. But the most important thing about the Bolero is that we Indians like honest machines.

I mean, look at it. Despite the facelift that took place about two years ago, which involved covering the exposed door hinges with plastic shrouds (!), you can’t hide the toughie’s basic nature. But the Bolero's not something you’ll naturally fall in love with – the love simply grows after you understand the machine.

The steering, despite the IFS, is still vague. The interior ergonomics are of a dubious, unfriendly nature. The facelifted gear lever is a pain to use. The handling is slightly suspect while the ride is best only when it’s weighed down – and weighing it down with people sitting in the middle row and at the back is a punishment posting for them. Yet, to me, the Bolero is a terrific machine.

It is because I like quirky classic machines - that’s perhaps why. Of course, that’s not the only reason. The CRDe motor has given a new edge to the Bolero’s performance. Its low-end torque means you can even keep it in fourth or fifth and crawl. And cruising at 100 kph is no big deal. Nice, wide rubber means it is more planted while they fill up the wheel arches quite nicely. And I like the low hood which gives you a nice driving perch. The ride is vastly improved over the previous versions, and calling it civilised won’t be out of place. And what I like best is its never-say-die, ready-when-you-are spirit. It can handle no-road conditions like nothing else.

I can think of a Bolero Safari edition, done up in sand colour and brown, stripped off the rear seats and other plastic paraphernalia (in fact, I would highlight those exposed hinges instead of hiding them), but I would add a bunch of auxiliary lamps and fat rubber and alloys too. It would be nice, no?

I fell in love with the Bolero all over again when we went for a long drive in the monsoons last year, where we took a CRDe along with other M&Ms from Mumbai to Kanyakumari. The snarl of the CRDe motor and the tired wipers simply outclassed by the rains would stay in my mind for a long time. The monsoon is coming up, maybe that’s why the Bolero has come back to gnaw my mind...