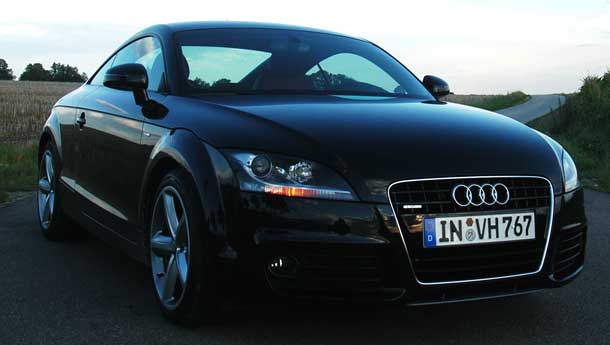 All show and no go. It’s a term used when cars look stunning but can’t half turn around a corner for their life. You generally find such cars around every corner, especially at your neighbours’, who bought a cheap Japanese sedan and loaded it with so much body kit that the body falls on its struts the moment a person enters the car. Even production cars have been guilty of such achievements. A dime a dozen Alfa Romeos. Or the De Lorean. Or the Ferrari Mondiale. And, as some would add, the last generation Audi TT.

It’s very hard to believe, but many experts did put the then Audi TT in a lowly place. A bit soft, not too focused (we also had the 1.8 which had to be worked hard) and it was only the architecture that prevented it from landing at the bottom of the pile. And you can’t fault it, for if you took a piece of rock and wanted to carve a sports car out of it, the Audi TT is probably the best you could do. Not to forget, it was the flame surfacing concept of its day, spawning so many inspirations that the automobile dictionary has lost count of them. So it’s hard to improve on perfection, but like Porsche’s engineers have kept improving the 911 generation after generation, Audi seems to have just acquired that knack.

When I got off the Audi Q7 that I had been driving for a couple of hours and laid my eyes on the TT by the field, waiting for its new driver to take over, I could make out that time and regulations have made the TT lose a bit of those crisp design elements – but only by a bit. The crease that runs from the air dam on to the bonnet and which forms the shoulder line is more fluid, while the eyelash-like headlamps lead the bottom part of the shoulder line to the largish tail lamps. The greenhouse looks more like the outer edge of an aircraft wing, and I bet that was done to make the tailgate look much more a part of the C-pillar. It’s an evolution, rather than a revolution, but yes, it also makes it a fresher looking car than its predecessor. For now.

And for all its sportscar pretensions, it doesn’t end by just looking great on the porch of a villa, off the coast of Spain. On the inside too, the silver rings that surround the air-vents, the flat bottomed steering, the aluminium pedals and the instrument binnacle, all make it look and feel like the smaller brother of the R8. This is a good thing, of course. Start up involves a twist of the key rather than hunting for a Start-engine button. You expect the engine to breathe right down your collar, but this is where all similarities with the R8 end. I would have liked to see an engine through that tailgate, but alas, the engine in this case is in the right place. Even then, the soft burbling of the 3.2 V6 with that ever-so-slight mechanical edge makes you forget the misnomer.

It was the last leg of the drive for that day, the part where I drove off village B-roads and back on to the autobahn to the Audi Forum at Munich airport. As I ran through the twisty sections before the autobahn, I could make out that the Quattro badge on the grille should have been replaced by 4Motion. After all, 85 per cent of the torque drives the front axle under normal conditions, so it doesn’t have the kind of torque split that adorns the RS4. You can’t fault it for mechanical grip, but you can’t get lunatic with it either. Had it been a track, I would have spent all day in a futile attempt to get the tail to swagger out, even though that wouldn’t necessarily be the fastest way around. But even here, it gripped very, very well and instantly I could gauge that the Mercedes SLK is just a notch lower in the same aspect. Using aluminium wishbones and a lower subframe at the front, the weight balance has worked out well in favour of grip.

Grippingly good is also the way the engine lends itself to a nice mechanical note, as the car swings past 3500 rpm. After all, it’s no different from the engine that hogs the bay of the Golf R32 that Bijoy drove last month. It’s got a fair bit of torque, rated at a little over 32 kgm, but I had to stay in between the 2500-3000 rpm band, directed by the six-speed manual that lay at my right hand. Indian drivers will have the 6-speed DSG auto to play around with, which is actually better. The synchromesh manual slots right into place, but has a heavy action to it that can get a bit tiresome around twisties. The engine also tends to run out of breath quicker, despite the 250 bhp on tap. The small loss is more noticeable in in-town conditions, where driveability is key, and for an Audi, it loses a bit on it. What adds to the gearbox’s woes is the steering wheel. I’m a big fan of the one on the RS4, but this one is a size bigger and the thumb points are too high up to allow for a comfortable hand-holding position. This is sad, considering the steering does give healthy doses of feel rather than just being well weighted.

But give the engine an open stretch and it unleashes all its horses with a sense of fury. Because you sit lower and the seat hugs you tighter, the sense of speed is even higher. Like the SLK too, it feels very well planted as the speedo starts to creep past 180 kph. The sense gets even more heightened as the damping isn’t as soft as regular Audi saloons, so you do end up counting the dead bugs on the road more accurately through the 17-inch tyres. The steering loads up in small dollops as speed increases, and by the 200 kph mark, it would take a Herculean effort to get the electromechanical steering to go off track. I did briefly see speeds of 230 kph on the speedo, but it felt just as committed as one would expect from a sports coupe.
What I didn’t expect is how much value the 3.2 is for Rs 49 lakh, ex-showroom Delhi. It has suddenly made its competition seem a little overpriced, but it will still have to contend with the Porsche Boxster that sets the benchmark in this segment and the upcoming BMW Z4. Nevertheless, as a poseur mobile, it ticks all the right boxes. And yes, it finally has the go to match the show.