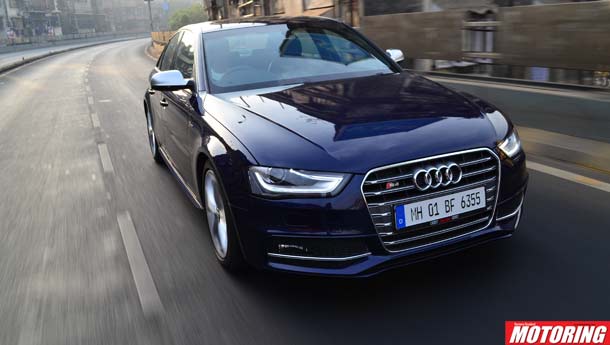 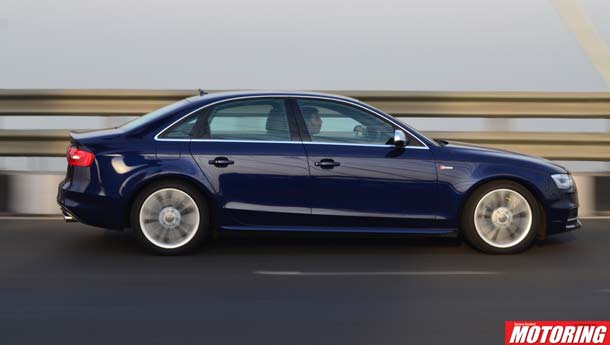 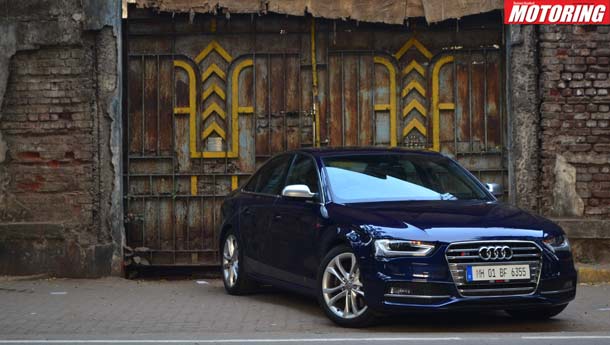 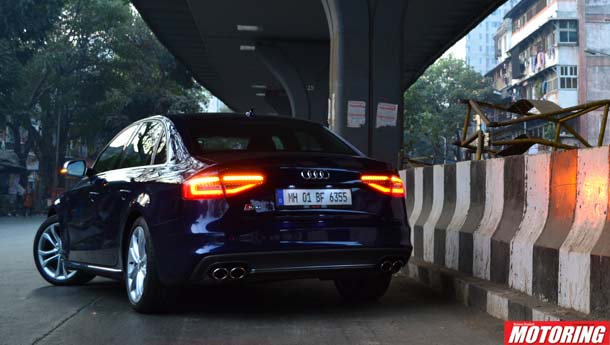 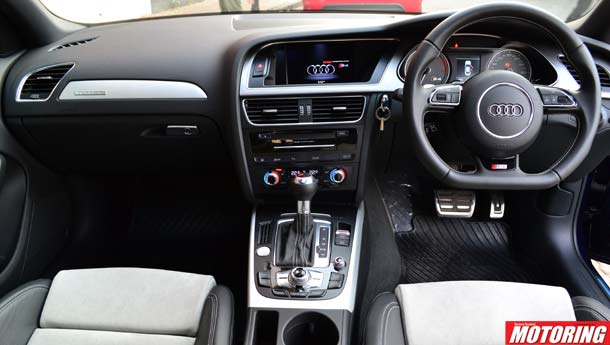 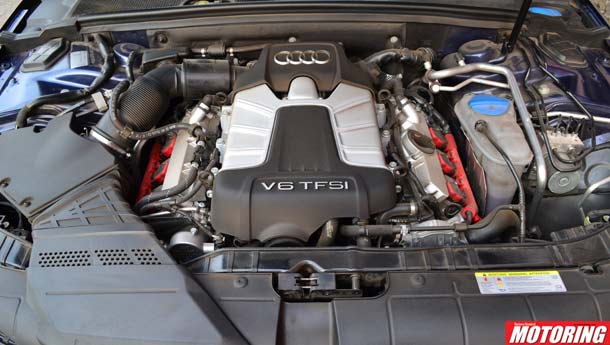 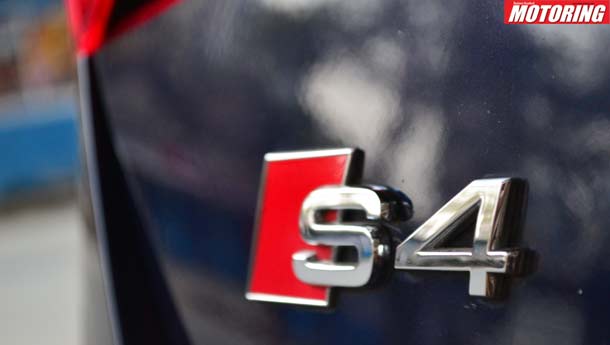 Guy in (insert supercar brand name here) at traffic light, superior smirk on face: ‘Hey, you there, fancy a dash from the lights?’

Guy in Audi A4: (Smiles and looks away)

When the light turns green, the supercar screams away, the driver laughing imperiously at the poor sod he’s left standing in his wake… until said sod pulls up alongside, still smiling, and level-pegs with him till they both run out of road. Guy in supercar drives away, a purple welt developing on his ego; guy in A4 smiles all the way home.

Except, of course, that it isn’t really an A4, in the strictest sense of the term – it’s an A4 with a don’t-mess-with-me attitude and a lot of bulges in its fundamental regions, and these bulges are what contribute to its name, the S4. This is a car that is intended for two purposes; one is to ferry you in comfort and happiness to work and back, and the other is to make smirking supercar owners digest some high quality crow. In other words, the S4 is that most interesting of automotive concepts – a sleeper.

In fact, the S4 is so much of a sleeper that it’s almost comatose. Unless they know what to look for, very few people will be able to tell the bog-standard A4 and an S4 apart; those in the know will recognise the discreet yet purposeful quad pipes, the 18-inch alloy wheels, the car’s lowered stance and the subtle S4 badging, front and rear. The car is a true member of the world of Audi, where you need 20/20 vision to tell most models apart, but it’s an arresting package nonetheless, taking the A4’s shapely form and injecting some oomph into it.

The cabin is typically Audi – beautifully finished and very well kitted out. There’s a preponderance of black, but it all looks very cutting edge, especially with all the brushed aluminium accents – it’s almost Scandinavian in its design philosophy. The sports seats are really well finished and very supportive, and the flat-bottomed steering wheel feels great in the hands; so far, it feels like the car’s been tweaked for a focussed driving experience.

The business end of a sleeper is to be found under its hood, and the S4 is big business indeed. The fireworks are provided by a supercharged 3-litre petrol V6, with 328 thoroughbred horses galloping forth from 5500-6500 rpm and 45.6 wholesome kgm of torque between 2900-5300 rpm. A supercharger was installed because of the inherently quicker power delivery of such systems, as opposed to turbochargers, which can be prone to lag; as a result, the engine is a snarling barnstormer, but it’s amazingly multi-faceted as well. In city traffic, it’s as easy and civilised to drive as a small hatchback, and it’s hard to really gauge the engine’s true potential; ride quality is excellent as well.

Poke the hornet’s nest, however, and the bloody thing changes character frighteningly quickly, screaming down the road at a rate of knots, its quad pipes bellowing a delicious symphony. A 0-100 kph blast takes just over 5 seconds; to put that in perspective, that’s not much slower than a BMW M5, which packs over 200 bhp more in the heavy artillery department. The engine delivers power in a linear and virtually seamless fashion, and the 7-speed S-tronic transmission is a great match for the bomb under the hood, matching revs perfectly and shifting much quicker than a row-it-yourself gearbox.

The S4 grips like a pit bull, and with a 60-40 rear-biased torque split, it’s only too happy to be pushed hard through a corner; power oversteer moments can be induced as well, if you have the skills for it. One of Audi’s chief weapons has always been quattro, the 4-wheel drive system that it developed to such stunning effect, and it makes the car a potent track weapon, albeit a slightly clinical one. It also has torque vectoring, which involves changing the amount of torque being sent to the outside rear wheels, thereby cutting understeer by forcing power to the outer wheel.

With a Drive Select system that lets you change between Efficiency, Comfort, Dynamic and Auto, as far as steering and throttle settings go, it’s easy to find a combination that you’ll be happy with; naturally, you’ll have the most fun with all dials set to 11. Naturally, you would expect a car this quick to have brakes capable of stopping it before you wrap yourself around a tree – simply put, it does.

So, for Rs 49 lakh (ex-showroom) of your bank balance, you get an A4 with bigger cojones, more show and a heck of a lot more go – and it’ll still be a doddle to use as an everyday car; in Efficiency mode, with a judicious right foot, you can eke close to 9 kpl out of it, which is impressive by any standards. You can drive the S4 to work, drop the kids off at their temple of learning, take the wife to a swish dinner and pick the in-laws up from the airport – and you can also flog it at a racetrack, make supercar owners curse in frustration and revel in the knowledge that you’ve probably bought the Rip Van Winkle of sleepers.