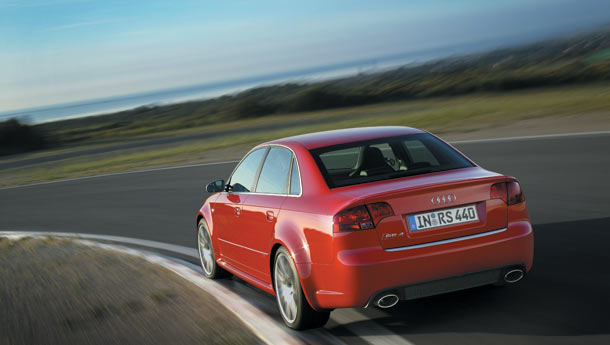 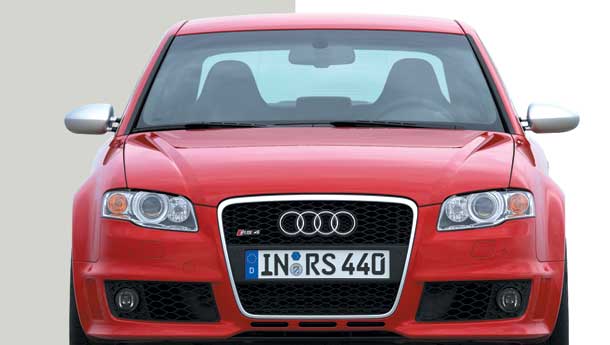 There are cars and there are benchmark cars. There are quite a lot of them in this issue of  BSM  too – the 360 Modena will be known as the first Ferrari you could drive to work, the Quattroporte is certain to be famous for its sheer beauty and the Corvette will remain the automotive expression of the Cold War era. And the Audi you see in these pages will be remembered for providing 420 bhp to all four wheels of an unsuspecting sedan. Or – this is even better – an estate.

The primary objective of flying in to Dubai was to sample the massive SUV debut of the Q7, but thoughtful friends at Audi felt it would be a good idea for us Asian scribes to sample the RS4 at Dubai’s clean-as-a-slate motorsport facility. No, we had not told them about our Summer of Speed issue.

First things first. As far as very fast sports sedans go, the textbook states that you got to have a big motor up-front driving the rear wheels, right? We all think so, since that is what we have been reading for years. And motoring hacks the world over, being proper nutcases, love the idea of massive torque to the rear wheels so that can they can slide around test tracks. But in real world conditions, where these cars have to survive severe European winters for example, it helps to have all that horsepower go to all wheels all the time. Even if that means no wild slides and opposite lock corrections that make the driver feel like a hero.

The RS4, as the name indicates, is the finest interpretation of Audi’s Quattro thinking. Not that Audi has not tried the stunt before. Actually, they have been chasing classic rear wheel driven legends like the M3s and AMG Mercs for some time now. But for the first time since the days of Walter Rohrl and his all-conquering Quattro coupe, a four-wheel drive car is going to lead that segment. Let me tell you why. First, let me just, er... kick start the RS4 with the cool button start.

Driving off the pit-lane, the RS4 lets you know that you are not driving any humdrum A4. The slight rumble from the exhaust, the sports-car vibes that cannot elude the seat of your pants and, of course, the seats that try to locate the exact location of your kidneys so that it can keep you grabbed. The last time I drove a four-wheel drive sedan hard I crashed spectacularly as anyone playing GT4 for the first time would. So I try to get familiar with things – starting with a blip of the throttle. The noise of engine revs building up has never been so spectacularly calibrated. It starts with a crackle and settles into steely rumble, and gets on to a lumpy thrum (the V8 got to announce itself, right?) and pales off with a hint of a wail which is normally reserved to only genuine supercars.  It really sounds like a music system tuned by someone whose middle name is Equaliser – you don’t miss the subtle low notes yet high frequencies will never get people to look for forgotten bomb shelters. Brilliant.   Ah, a nice straight and that means it is time to scare myself silly. The RS4 is no hooligan when it comes to drag strip aping acceleration. Truckloads of electronics and power to all corners ensure that rubber does not react violently with tarmac on full thrust. The gearbox is full of positive shifts, and the first gear pays more or less lip service. Second is the one you drive in, and third takes guts to use fully. And you do need to get to an edgy clutch. Going through the ratios is an eye-dilating experience as the RS4 stuns the clock at 4.8 seconds to 100 kph. By the time you realise this and get your eyes back on the straight you are doing 200 kph and not far from the end of the straight. There is a reason why Formula One races are not held at the Dubai Autodrome and that is a pity. It would be nice to see F1 cars make full use of the tarmac here. The RS did too, but I ran out of guts and tapped the amazingly sensitive brakes (another advantage of all-wheel drive) that brought down the speed as if I’d hit a concrete wall. I was not going to fiddle with the switchgear in the short span that I was getting to know the car. Still, the 40:60 torque split could be felt as the RS4 straightened the corner with no apparent effort.

Forget the near nuclear surge and complex powertrain for a second and the RS4 transforms to a wonderful driver’s car with no match. Few months back, I had driven a couple of ‘normal’ A4s in and around Ingolstadt and I realised they were mere Diwali rockets compared to the ballistic missile that I was now strapped into. All right, I am yet to drive one in anger through a hailstorm or for that matter in snow but I don’t think anything short of a twister or a debutant lunatic driver on steroids will be able to unsettle the dynamics of this machine. Or it needs DTM drivers to cause some sideways action – in fact, Audi had helpfully brought them down to do just that. When you drive a rear wheel drive car fast, you are always aware of the approaching limit – of the car as well as of your ability to catch it when it snaps – but the RS4 lets you concentrate on the road (or in my case, the track) and on thinking up ways to shorten the time taken to devour corners. I did talk to veteran Euro journalist friends who have lived through generations of Mitsubishi EVOs on how they would compare the Japanese supercar killer with the RS4. The answer was clear – you can compare it to a production Skyline GT-R but not to something powered by a stir-fried four-pot. ‘For God’s sake, this one is a propah f***** V8’, said another. Happy now, I went for refreshments. My time with the RS4 was over and I was determined to drive it on a proper driving road. Maybe through the extremely well paved yet twisty Jebel Hafeet just off Dubai city.

Wait a minute – I have not dealt with the looks of the car at all. I know you are already ogling at the pics in these pages but I can assure you that the Audi RS4 looks even more stunning in the metal. In fact, we’ve used images from Audi’s media database rather than from the drive, because stickering was hiding some of its lines in Dubai. I am not a big fan ofthe  chrome surround for the greenhouse (not in this car, please). And I thought the twin slashes on the front bumper belonged to an after-market mod than a fully-blown company effort. Still, the car looks stunning when it comes around a fast, unsettling corner – then it looks like a DTM racer replica. Which, it can justly claim to be.