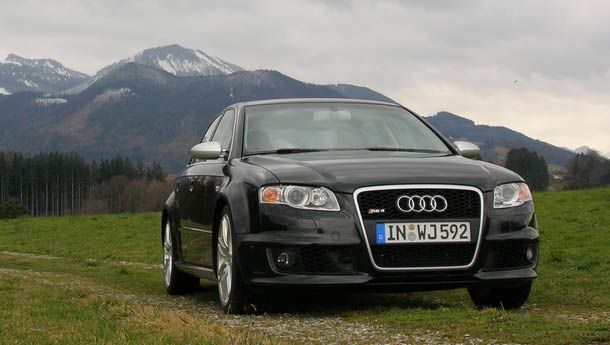 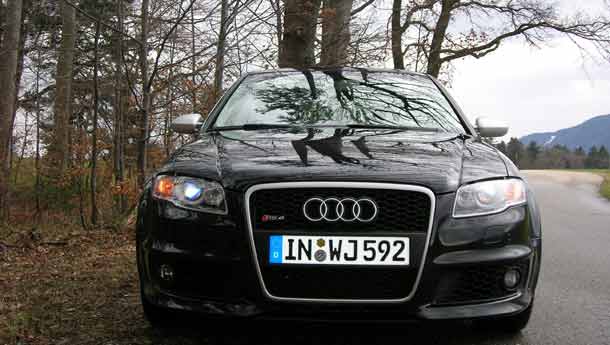 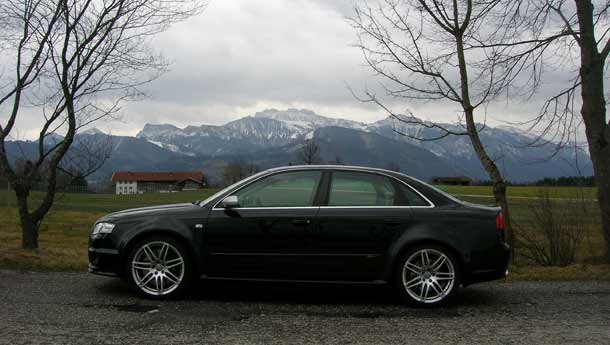 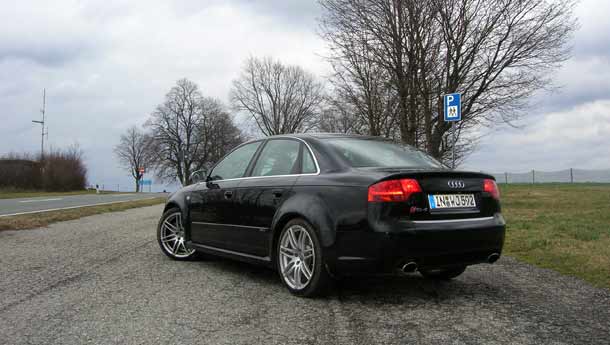 Way back in the 1980s, when Europe strummed to Duran Duran's synthpop, BMW decided it was time to let those Armani-clad baby boomers have some fun. They took one number E28 5 Series, dropped in their famous 3500cc inline-six that powered the M1 supercar, stiffened the suspension and fittingly re-kindled the super saloon segment. It didn't take long before Mercedes-Benz and Audi upped their act. Mercedes went ahead and bought out AMG, a specialist tuner, while Audi put its road-going fast cars under the Quattro stranglehold.

Quattro, though, pretty much lived in the shadow of the M division and AMG. While their first offering, the RS2 was skin-tearingly fast, it was just a brutal wagon with enough understeer to mow down some trees. Things improved with the first of the RS4s and later the RS6, but not enough to stop both BMW and Mercedes from leading the pack. Until now.

Not for nothing did someone say 'If you don't have it, acquire it.' So Audi went manpower hunting, er, poaching, from BMW and Mercedes to get their package right. Right in a sense that we auto scribes haven't been kind to Ingolstadt's understeery four-wheel drive cars. Sometimes the choicest of words can move managements. Even corporate ethos. As I was to discover over 350 km of driving, Audi might have just hit home-run.

Back in March last year, Bijoy drove the RS4 saloon (April 2006 BSM) at the Dubai Autodrome. While the handling prowess and its snap-of-the-finger acceleration ability were clearly highlighted, the ultimate test, an autobahn drive eluded us. So, when the call came to try out the RS4 at its true hunting ground, Bijoy asked me to sharpen my claws for a trip to the Fatherland.

Like the first M5, the RS4 too has supercar links. But unlike the M5, the engine was first developed around the saloon/avant/cabriolet and then plonked into the lithe mid-engined R8. The result either ways is truly astounding. Following the second rule, 'If you can't innovate, emulate', Audi has taken inspiration from BMW and gone ahead with the 100 bhp per litre format. And like BMW, they have achieved the magical figure minus forced induction. The 4200cc V8 engine from the S4 has had substantial improvements, enough to alter the character from a Bradley armoured vehicle to an M1 Abrams tank. Lightened using modified pistons and con rods and with a lower centre of gravity, the V8's output has been further enhanced using an all new crankshaft, cylinder heads and a dual-exhaust system that snorts every time you rev that engine.

With 420 bhp achieved at a heady 7800 rpm and the rev-limiter kicking in some 400 rpm later, Audi have truly done justice to the high-revving engine concept. Mated to the six-speed manual gearbox, the engine can propel the car to 100 kph in 4.8 seconds, then hit the quarter mile mark in 13-odd seconds, burying the throttle a bit more brings up 200 kph up just 4.5 seconds later. A committed right foot, clenched teeth and sweaty palm grips later, you have hit the governor – some laughably watching their car pass others to their right (we are in Germany, remember) at 69 metres a second, others calling up Audi specialist Motoren Technik Mayer (MTM) to get rid of the limiter. Which is not a bad idea, considering it can do 300 kph, but horribly wrong if you have a habit of regularly paying high insurance premiums. You win some, you lose a lot.

To get an idea of the sort of numbers Audi's press kit dished out, we headed out of Ingolstadt towards the south of Munich on the autobahn and back. Germany at this time of the year is just short of freezing and with the return of the cold wave, there were the odd showers, even sleet. I wasn't too kicked about the whole idea of driving with the electronic management systems off in such conditions, which meant hitting the traction control button twice. But even turning the traction control off wasn't on my to-do list that day. So as tempted as I was to turn it off, I refrained from even touching it. Sigh!

Once on the autobahn though, I was quite curious to see what the sport function did. Rabble-rousing, torrid, dog-eat-dog, the RS4 changes its temperament faster than you can exclaim teufel! In one push of the left thumb, the button on the left spoke of the three-spoked wheel pushes the side bolsters to nudge your floating ribs closer to the sternum, alters the engine note from a sweet thrum to a despotic growl and drops your jaw far down to instigate excruciating pain in that nagging ulcer. Then when you flex some of those thigh muscles, you realise why stealing an engineer or two from BMW can pay dividends so high that the German DAX will need to start a new 'fun-factor' index for Audi.

From the lower range to the rev-limit, the power delivery is so linear in any gear, that at 1400 rpm you can doddle along in sixth gear on a gradual incline and wonder why people go tom-tomming the 'long live diesel' slogan. Some fits of laughter later, you downshift once, twice, thrice, four times and even then you are doing 120 kays in second gear. So flexible is the engine in any gear in such a wide band that 90 per cent of the 43 kgm of peak torque is available from 2250 to 7600 rpm. If anything, Audi has got the super saloon funda spot on. A car that can cruise when grandma needs to go for her Sunday senior citizens meet and to make a quick dash to the hospital when her pulses lose consistency.

Once outside Munich, we headed out to a two-lane service road connecting two highways. With lots of twists, gradual crests and fast curves, the RS4 held the line with immense levels of grip. Traction control off (itching habits die hard!), the car showed why a 40:60 front-rear power split can make things reasonably exciting. On the edge, there's a very slight hint of roll thanks to Audi's Dynamic Ride Control which curtails pitching and transverse movements, but follow the white line and it just refuses to step on it even when a few thousand revs are dialled in.

On the brakes when you see a car approaching fast, and the Gallardo-derived brake discs haul the car quickly to single digit speeds while the seat belt yanks you back into your seat. And when you pull over to the side of the road, you switch off the Bose system just to hear that V8 gurgle. It isn't high pitched, but a full deep throated rumble that brings back images of the Balrog demon from The Lord of the Rings. For a mass produced (in relative terms) car, it makes one weak in his knees, weak enough to snatch the keys back from Audi. You forget the stiff suspension that lets you count the marbles as the 255/40 R18 tyres roll over them. You also forget the fact that at miserly speeds you can extract 7 kpl that drops to nearly 3 kpl (all company claimed) at full blat. Not getting mesmerised by the engine note is just not possible in Audi's book. They can etch my name on their pages.

As we returned to the Audi Forum and I gave the car one last glance, everything seemed right. From the slits on the bumper to the twin exhausts, the Bulgarian beard that complements the deep wire-mesh airdam to the boot-lip spoiler and the twin-spoke seven-arm wheels, there's the just the right amount of character and charm. Subtlety with smart touches at a base price of Rs 75 lakh, Mumbai is an expensive price to pay. But when you leave that poor chap in his one-crore rupee plus European coupe hunting for expletives at a traffic light drag, you can be sure it's one investment that will reap long term benefits.

The engines are same, but one is an utterly fast sedan, the other a humongous SUV. Either ways you can't be called a tree hugger.