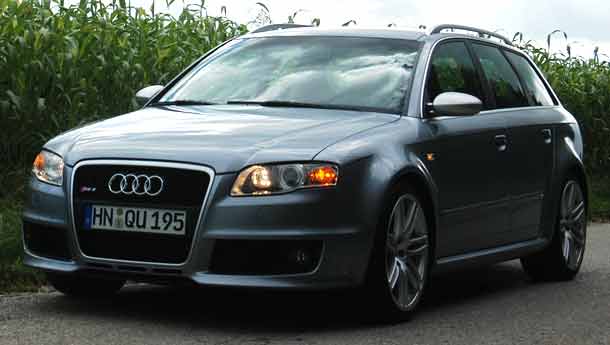 I’m going to make this snappy. I’ve driven this car before (Showoff! – Ed), so there’s no need for me to go on and on about it. But there’s a catch, guys. It’s the estate version, the car that lets dogs salivate in the boot, kids puke in the rear seat and parents mess up the centre console with mayonnaise. And yes, it’s also one of the cars I’d like to own in my million dollar garage. BMW M3? What’s that?
If you haven’t driven an RS4 in your life (Showoff! – the rest of the BSM team), I suggest you pack your bags, break your fixed deposits, fly cattle class and just drive this on the autobahn from Munich to the Nurburgring. Don’t expect me to tell you what to do once you are at the ‘Ring, but yes, don’t lose it completely on the track, or you will be doing manual labour in a German prison for the rest of your life. The last time I drove the RS4 (Showoff! – the rest of the motoring journalist fraternity), my pulse rose eight point seven-fold and for the next couple of weeks I would wake up in the middle of the night, my brain replaying sounds of that wonderful V8. I haven’t experienced the same with any other car. Nein.

So what makes the Avant so different from the saloon? Not much, apart from the extra 40 kg on the rear axle, the more tied-down steering wheel and the larger glass area. But these are differences one would notice only on a short drive. Put it down on the autobahn and there’s more to consume. The steering wheel is better weighed down and as the Avant slips past 200 kays, it also feels more planted than the saloon, but the steering is also a bit devoid of feel, the telepathic responses of the saloon missing in parts. Despite the numb steering, it is strangely likeable.

Then there’s that button on the steering wheel that plays its magic. Apart from altering the exhaust note from a snarl to a deep-throated growl and getting the side bolsters to crush your ribs, the seat clenches your bottom so hard that it feels like you are about to go through a high-G blackout scenario. It makes you quiver rather than leave you unconscious behind the steering wheel, but the concoction of the change in the seat, steering and exhaust is enough to force your foot to bury the throttle in the firewall. Then again, you can’t blame yourself for such lunacy, it is that 4200cc V8 doing all the damage to your sanity. It feels like the 414 bhp just wants to play mice to the Pied Piper in your right foot. The sheer linearity in any gear at any rpm makes it one beaut of an engine, but then that’s exactly where the strength of Audi lies. Not only have they managed to crack the high-revving concept of BMW, but they have also added the sheer driveability of a Mercedes AMG into the picture. And mind you, without forced induction.

Despite the fabulous engine and that snick-happy gearbox, the RS4 isn’t perfect. Somewhere, as you approach the limit, the 40:60 torque split can’t control the slight tendency to understeer, and on a race track it could get a bit more pronounced. I also can’t understand why Audi have stuck to manual wind-down windows for the rear, and considering such estates are termed loosely by us journos as ‘soccer mom wagons’, it’s quite an irony. Flies in an otherwise flawless ointment, but what an ointment!

Alas, it won’t be healing too many broken souls for long, as the production of the saloon runs out this month and the Avant soldiers on till May next year before it gives up the fight. From there on, until another year hence, we will be without an RS4, until the new twin-turbo version comes along, with 450 bhp trumpeting through the driveline. This is of course a lot of time for BMW’s criticised new M3 to recover lost ground and Mercedes to forge new allies with the C63 AMG. What hurts most is that the next time I go for an Audi drive, there won’t be an RS4 in the fleet. The urge to press that start button on the central tunnel, the meaty roar from those double chamber exhausts, the gripping of palms on the flat bottomed steering wheel and the mercurial gathering of speed. Six months – that’s all I have to get on to that plane for Munich to go to the ‘Ring and...