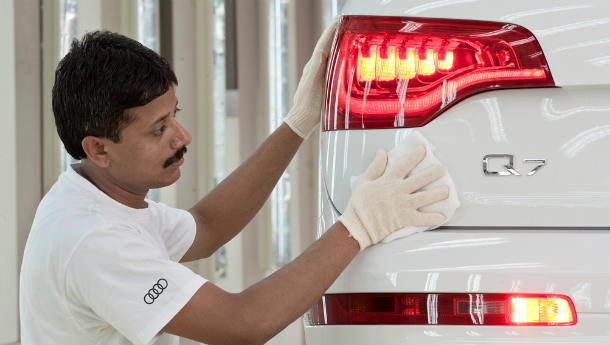 The flagship SUV will now roll out from Audi's facility at Aurangabad in Maharashtra, where the A4, A6 and Q5 SUV is also assembled. The Q7 has been Audi's best-selling SUV for many years, until the arrival of the Q5 and this year the Q3. With the initiation of its Indian assembly operations, Audi hopes to bring down the waiting period for the ultra-successful SUV substantially.

The Q7 becomes the fourth CKD product from Audi's stable in India. It will add the Q3 baby SUV to that list in 2013. The Q7 is currently offered with three engine options; a 3.0-litre TFSI V6 petrol, a 3.0-litre V6 TDI diesel and a 4.2-litre V8 TDI diesel. It is not known whether all three engine variants will be assembled in India or not. Audi hopes to roll out 1,000 units of the Q7 each year from Aurangabad.