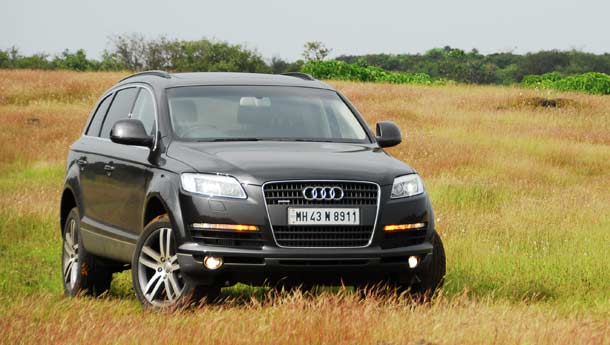 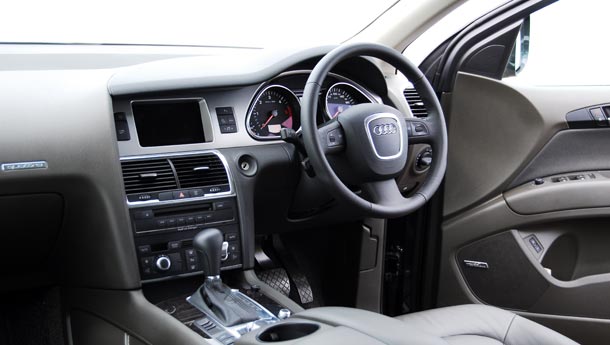 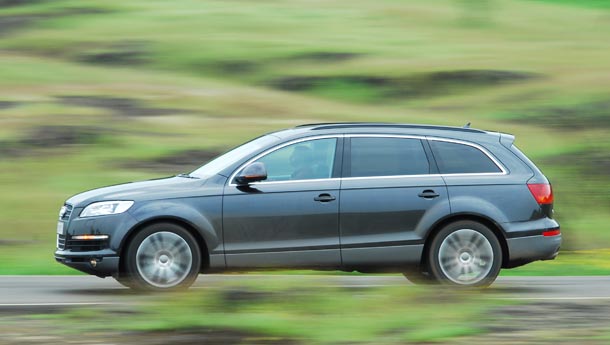 Yes, the car you see here is the Q7 all right, but it’s not the 6.0 TDI. Half of it, in fact – it’s the Q7 V6 3.0 TDI, you see. The world-conquering V12 oilburner seems to me the result of a megalomaniacal, kinky German engineer in the Audi skunk works mating two of these V6s late at night, blowing them with two turbochargers and then whipping the whole shebang to produce those ridiculous output figures. ‘Ze Q7 today, tomorrow ze A8... bwaaahaha!’

Does that mean that the car that I am piloting now is a compromise? You see, other than that monstrous V12 diesel, the Q7 also comes with a whopping 350 bhp 4200cc V8 petrol. So it was but natural for me to think that this diesel would be a bit of a letdown – especially for a car that’s as big as a Volvo B7R bus and just as heavy too. But when I casually glanced at the speedo and saw the needle kissing the 200 kph mark, to say that I was surprised is an understatement. Even with the tell-tale increase in wind and tyre noise at 200 kph-plus speeds, you can hear a pin drop in the car. Well, you can’t exactly hear a pin drop because of that plush carpeting, but you get what I mean. We managed to attain 210 kph, and even then, the engine showed no signs of strain. Neither did the rest of the Q7 feel uncomfortable and unsteady, it stayed planted to the road.
The reason for that glue-like stickiness is adaptive air suspension. At high speeds, the Q7 automatically hunkers down, which improves the high-speed dynamics of the SUV and reduces drag, and consequently fuel efficiency (as if it mattered, but still). But more about the ride, handling and the chassis later. Meet one-half of the V12 TDI first. This common-rail turbodiesel V6, featuring double overhead camshafts and four-valves per cylinder, displaces 2967cc to develop 233 bhp at 4000 rpm and 50.4 kgm between 1750 and 2750 rpm. The motor may make itself heard while you start it, but soon it quietens up... of course, you’d have to strain to hear it while you are inside.   The V6 makes the Q7 not only fast, but quick too. It takes just 4.5 seconds to get to 60 kph and 100 kph is attained from standstill in 9.4 seconds. Now that’s mighty quick for a vehicle that tilts the scales at 2,295 kg. Unladen! Its strongest point is of course the stunning mid-range. 80-120 kph is dismissed in 7.8 seconds, while 100 to 140 kph takes only 9.4 seconds. Oh, did I tell you it’s an automatic? The engine is paired to a six-speed tiptronic that also has a ‘dynamic shift programme’ and ‘sport programme’. Which basically quickens the pace of gear shifts to match enthusiastic driving. If you are missing not shifting the gear lever, tap it to the left and you can have fun like in a manual. Still feeling bored? Don’t worry, there’s also the paddle-shift option! Choices, choices.

We also did a couple of 0 to 100 kph to 0 runs, to find not just how quick it goes, but how well it comes to a halt too. It consistently took 13.5 seconds for this exercise. Many cars and especially dynamically challenged SUVs/MPVs are particularly wild when you do the 0-100-0 test – their engines shut off, they change lanes without you intending to and sometimes even face the opposite direction of your trajectory. Not with the Q7. It went through the motions, again and again, without losing composure.

On city roads, the Q7 is a bit of a handful, not just for the bulk, but for the initial lag below 1500 revs combined with the mild tardiness of the automatic gearbox. On the highways, the V6 loves to happily stay at around 2000 rpm, when the Q7 munches miles at speeds hovering around 150 to 160 kph. It will keep doing this all day with ease, while you are relaxing in supreme comfort, listening to your music in the superb Bose stereo.   However, the best part of the Q7 is when you take it to the twisty roads. Car-like handling is something most manufacturers bandy about when talking about their SUV/crossover’s attributes, but Audi’s just proven it with the Q7. Yes, its unitary construction means overall safety and better handling, but you don’t expect 5-metre long SUVs to behave like sports sedans on ghat roads. But the Q7 belies its bulk and shrinks around you – remember, this SUV is so long that the rear axle going up and down is the speedbreaker you confronted two minutes back. In the adaptive air suspension’s dynamic mode (one of five!), you can attack decreasing radius corners at speeds which would normally be considered insane in any other standard SUV. The only giveaway is the tyre squeal, but other than that the Audi sticks to its lane barely giving an inch away.

Audi has given the Q7 double wishbones at the front and the rear, which uses plenty of aluminium and not only improves ride comfort but the driving experience as well. But more importantly, the Q7 is blessed with the new-gen version of Quattro technology – permanent four-wheel drive with a 40:60 torque split – that allows for such cornering antics. It keeps the SUV stable in spite of the forces that come into play at such situations and that rear-bias makes it much more nimble. Not just Quattro, the secret of the Q7’s directional stability is the Audi direct servotronic steering which gives it a degree of precision that’s unbelievable in a gigantic SUV. Okay, a lot of electronics go into making the Q7 behave the way it does, but what’s wrong with that?

When Audi embarked on making its first ever SUV, expectations were high. It had to be a proper Audi in all aspects – read design, sporty prowess, quality of construction and materials – and it also had to have the attributes of an SUV, that of being able to go off-road and accommodate seven people or five people and luggage in comfort. With the Q7, they have managed to pull it off. It’s one of the best looking SUVs around while the front end makes people give way instantly, the rear seems to belong to a concept car. But it’s the classic Audi roof arch and the chrome surround that give it that sporty look and hides the bulk effortlessly. Not just that. It’s comprehensively packaged in terms of safety equipment and luxury features. If you have over Rs 65 lakh to spend and are looking for the best SUV on sale in the country today, the Q7 is it. The new-gen BMW X5 and the Mercedes-Benz M-Class are still on their way! Okay, question time again. Can these two beat the Q7? No, I don’t have the answer to that yet, but it’s worth finding out, no?