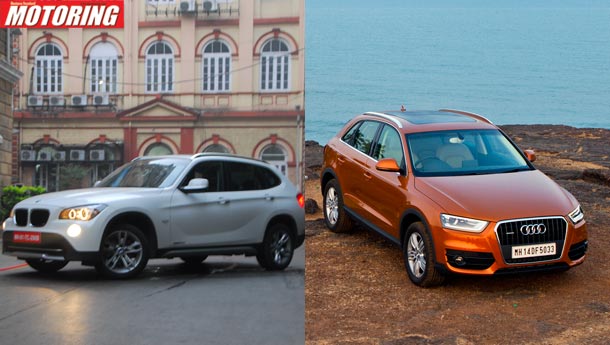 Audi's salvo at the BMW X1, the Q3 is right around the corner. While it may be a bit more pricey than the BMW X1 (by a lakh of rupees or two), the Q3 has a lot going for itself.

Unlike the X1, the Q3 features quattro all-wheel drive, that gives it a bit of an edge over the rear-wheel driven BMW. On the inside, the Q3 has a bit more room, especially legroom and knee room at the rear, so that gives the Q3 another advantage. The central tunnel isn't too high and at a pinch, three persons can be ferried around. Storage space on the inside is excellent and so is the overall build quality, fit and finish. Except for the door handles, everything seems to be built to VW/Audi standards. The equipment level is fairly comprehensive both on the inside and outside. The basic version makes do with standard halogen headlamps instead of xenons on the premium while the roof rails are brushed aluminium on the premum, the basic making do with matt black ones. The MMI system on the Audi is a bit counterintuitive to use, though by placing it on the central console instead of the tunnel, it does seem to be easier to use.

The Q3's 2.0-litre diesel produces about 177 bhp, to the BMW X1's 184 bhp. It's here that the Q3 finds itself a bit wanting. The transmission does have a bit of a rubber-band effect while shifting, even though it's quick enough, unlike the slick shifting six-speed unit on the X1. The X1's motor feels more willing too and is just better tuned to deliver performance. Braking on both cars are pretty good, the ones on the Q3 are a bit more confidence inspiring.

Dynamically, quattro does make it easier to go faster around corners with understeer setting in if you try your luck a bit. The X1, on the other hand has a more responsive steering with good feedback. It's also a lot of fun to push hard for the more adept driver, though high speed straight line stability isn't as good, making you wonder if leaving out all-wheel drive was a smart move in the first place.

In the end, the X1 is a better driver's car, but that's pretty much its best talent. For the Q3 is more practical, has more space, is better rounded and seems to be better specced out for the Indian market. That makes it our choice of the two.