Audi likely to launch its new A4 in India in August

Audi India is likely to launch the all-new A4 luxury sedan in August this year. The A4 is one of the most popular models and an important one for the German carmaker. 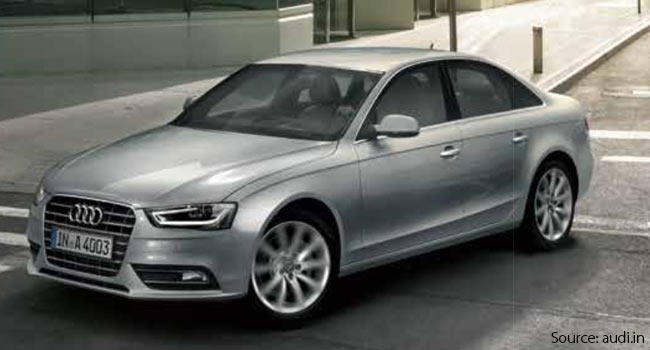 The all-new A4 has been on sale in international markets since mid-2015 and was showcased in India at the 2016 Auto Expo in February. As on the current A4, a 2.0-litre diesel unit will be at the core of the new car's engine range. In India, the four-cylinder unit, part of the VW Group’s new engine family, will be offered in the 190hp guise, up 15hp from today’s A4 35TDI.

With the new-gen engine to be assembled in India from next year, the engine will come mated to Audi’s S Tronic 7-speed dual-clutch gearbox which is a big departure from the old A4’s use of the Multitronic CVT system. It is learnt that there is also the possibility of this engine being offered with the option of a six-speed manual gearbox.

Internationally, the new A4 is available with 1.4- and 2.0-litre turbo-petrol engines, while the carmaker is working on bringing the smaller of the two engines to India. The 150hp 1.4-litre direct-injection turbo petrol is the same engine that powers the Skoda Octavia 1.4 TSI.

With Audi yet to finalise trim levels for the Indian entry, the A4 is likely to be available in two or three variants. The 2.0 diesel manual and 1.4 petrol A4 will come with fewer frills than the rest of the range. The ones with top-spec will be generously loaded with equipment like Audi’s Matrix LED headlights, fully digital instruments (Virtual Cockpit in Audi speak), MMI infotainment system with Android Auto and Apple CarPlay compatibility, Bang & Olufsen sound system, wireless phone charging, three-zone climate control, ambient lighting, a sunroof and driving modes (Drive Select), among other features.

Though there’s no word on pricing yet, the new A4 could be in the sub Rs. 40 lakh starting price. When launched, the new A4 will compete with the BMW 3-series, Jaguar XE, Mercedes-Benz C-class and Volvo S60.