Audi Launches new base variant of A3 Sedan for Rs. 25.50 Lac

Audi India has introduced a new base variant of their A3 sedan. The new A3 40 TFSI Premium is priced at Rs. 25.50 lac (ex-showroom Delhi / Mumbai). The Premium Plus variant which costed Rs 30.2 lac has now been discontinued making 40 TFSI Premium the only petrol variant in the A3 range. This variant is almost 3 lac cheaper than its diesel powered cousin making it a good choice for people looking to make their way into luxury sedan segment. Also, this aggressive pricing creates a Rs. 10 lac gap between the base Audi and its Merc rival, the CLA which is a CBU product. 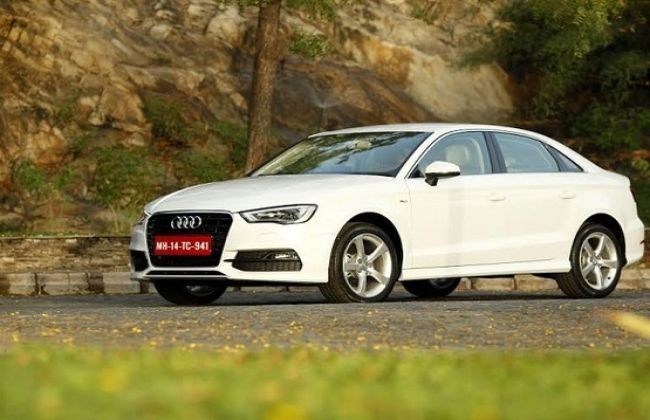 The price drop does come at the cost of some features. The car loses out on front parking sensors, fog lamps and tyre pressure monitoring system. Other features which are scaled down include 16-inch alloys instead of the 17-inch, audio response parking sensors (only rear) instead of a full display and halogen headlamps instead of Xenons which were there in the Premium Plus.

Adding to the gizmos, the car now has an updated vehicle infotainment system with Audi music interface, Bluetooth interface, Passive Speakers and MMI radio. The Audi music interface allows portable media players to connect into MMI which enables customers to select albums, artists, genres or tracks with the MMI controls.

Under the hood, powering the front wheels is a 1.8-litre petrol engine which manages to produce 178bhp and 250Nm of torque. Power delivery is handled by a seven-speed dual-clutch S-Tronic gearbox which propels the car from a standstill to 100 km/h in 7.3 seconds.

Talking about the new A3 40 TFSI Premium, Audi India head, Mr. Joe King said “The Audi A3 Sedan packaged with youthful design, visionary technology and luxurious performance has set new benchmarks in the compact luxury car segment. As it completes one year in India, we are happy to introduce this new model that makes an exceptional car even better. We are confident that the new features will further enhance the appeal of this Compact, Sporty, Progressive and Sophisticated sedan amongst the Audi enthusiasts.” Mr King further added, "A petrol customer is a unique customer who wants power and also efficiency at the same time. With the Audi A3 we are effectively offering the best of both to him. The Audi A3 40 TFSI offers 180 hp power and fuel efficiency of 16.6 kmpl. The Audi A3 Cabriolet - India's largest selling Cabriolet is a petrol car. We are surprised with the demand for the A3 Cabriolet (which is available only in petrol). Having already exhausted the yearly allocation we have requested for higher and expect the new Audi A3 40 TFSI Premium to follow this trend,"