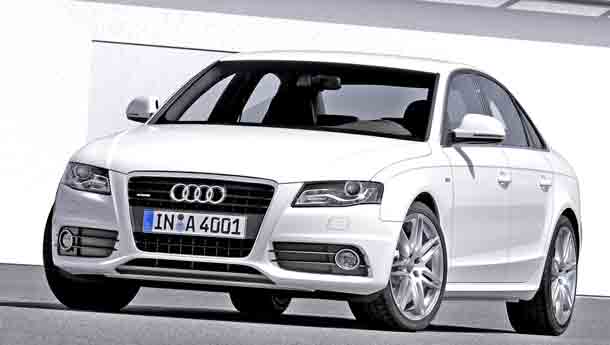 Audi have launched three new engine options for the A4 today. To complement the current range of engines - the 3.2 FSI V6 Quattro and the 2.0 TDI, the three new engines will take the total tally of engines in the A4 range to five - two diesels and three petrols.

Two of these engines we are quite familiar with. The 3.0 TDI Quattro with 240 bhp of peak power powers every single Audi sold in India, apart from the TT coupe and R8 supercar. The 2.0 TFSI that was first introduced with the Q5 earlier this month finds its way into the engine bay of the A4 as well. Producing around 211 bhp, the TFSI allows Audi to expand its presence in the petrol luxury saloon segment with a decent four cylinder petrol engine.

The new engine here is the 1.8 TFSI. To be the entry level offering, the 1.8 TFSI with 160 bhp will add much needed vitality in the range, while taking a dig at some of the competitors lower down the price range such as the Skoda Superb, Honda Accord, Toyota Camry and the Nissan Teana. Incidentally, this is the same engine as found on the Superb, with identical power and torque figures.

That also means its price tag is delicious. At Rs 26.67 lakh ex-showroom, Mumbai (without octroi), the A4 has become a tantalising option for those who considered it out of reach. The facelifted Q7 with its myraid of engine options is lined up for launch, but isn't expected to be here until the end of this year.