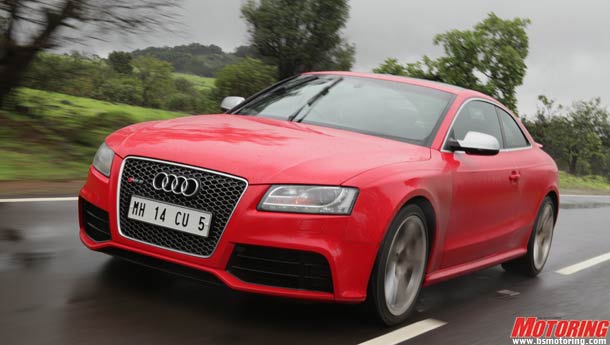 Audi Hyderabad, dealers for the city, aim to sell 300 units of all Audi models this calendar year and have already sold two units of RS 5.

"We have so far sold 550 Audi cars in the city since the dealership opened three years ago. The new model, which has won many awards globally, will further drive the sales in the city," Rajiv M Sanghvi, managing director, Audi Hyderabad, said after the launch.

Sanghavi further said Audi A4 sedan and Audi Q7 SUV were driving sales for the dealership and there was a demand for Audi vehicles from even coastal districts and other parts of the state, though Hyderabad accounts for a major chunk of the sales.

Currently, Audi has a 28% market share in luxury car segment in Andhra Pradesh.

"With its athletic and powerful identity, spontaneous responsiveness and extraordinarily high revving, the new Audi RS 5 is the ideal high performance coupe which embodies the core essence of our brand DNA, 'Vorsprung durch Technik'.

"Equipped with a powerful V8 engine, a new permanent all – wheel drive system and a whole series of performance characteristics, the Audi RS 5 truly epitomises progressiveness and is unmatched in terms of style, performance and driving dynamics.

I am confident that the launch of the new Audi RS 5 will further help us consolidate our position in the sports car segment," Michael Perschke, Head – Audi India had earlier said in a statement.