Audi India is offering enticing offer on its selected range, you can drive home an Audi on its ex-showroom price, rather than the on-road price which includes, car registration and insurance. The German automaker says that the offer is valid on a limited stock only. Audi, one of the leading luxury automakers in the country has recently announced in November that they have already sold more than 10,000 units this year and December has just started! 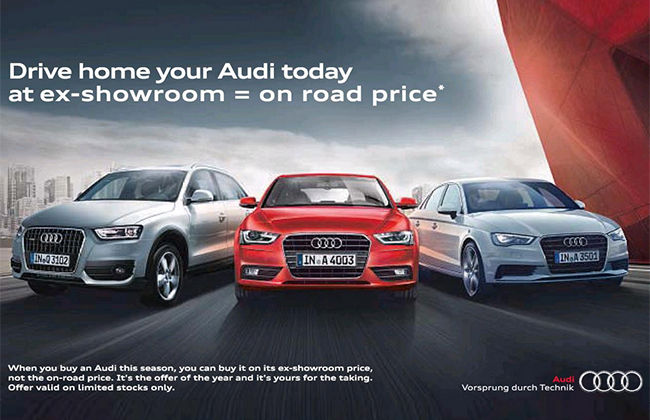 Speaking in this context, to celebrate its 10,000 sales company has also offered special benefits on its leading sedan - A4 and A6.  The special offer is applicable on bookings of first 300 units of A4 and A6 on first-come first-serve basis. The scheme includes, 3 years of - service, warranty, insurance and roadside assistance on both the sedans.

Moreover, Audi will also launch a cabriolet version of the A3 sedan next week - 11th of December. Unlike the A3 sedan, the cabriolet version will be imported through a CBU (completely built units) route, as it a niche product. The soft-top A3 looks identical to the sedan and will also share its features with the same, both inside-out. Cabriolet will be powered by  the sedan’s 1.8-liter TFSI turbo petrol motor. Transmission duties will be handled by a seven-speed S-Tronic dual clutch automatic gearbox.