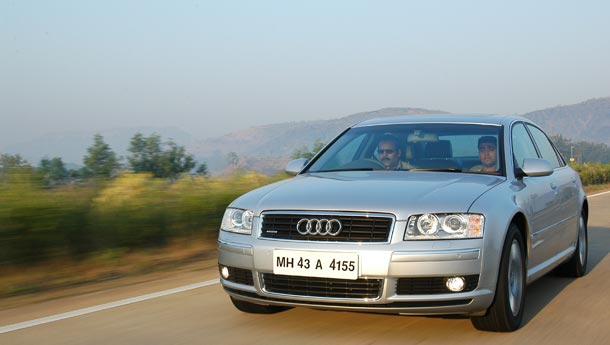 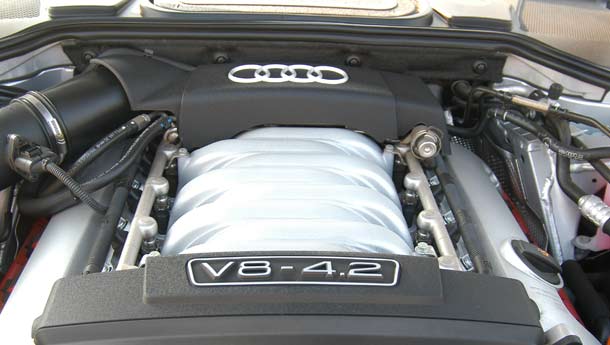 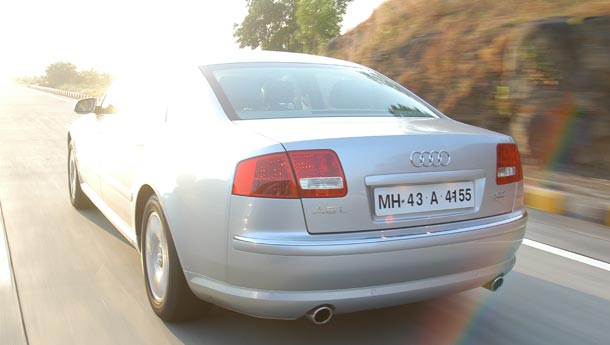 I knew a few things about the Audi A8 much before driving it, and I guess it will be alright for me to share it before you go further with this report. To begin with, the A8 is good enough to outsell both the BMW 7 Series and the Mercedes-Benz S-Class in, this is the interesting part, fatherland Germany. You will agree that the guys with luxury car money in Germany know a thing or two about cars. Secondly, I knew that there is a hell of a lot of aluminium that has gone into making the A8. To me, aluminium meant cheap cooking vessels till I read about the virtues of this metal that is much lighter and stronger than conventional sheet metal.


And then, I knew that the guys at Ingolstadt were trend-setters in design. Now, looking at the A8, I do have my doubts. It is a fab car that looks bigger in flesh than in pics, but while the S-Class with that proud star makes a big statement of wealth and the 7 Series with its Bangled lines makes you stand out in the crowd, the A8 does nothing but sit there. Or so you and me think.

Audi calls the A8 buyer the I-type person. This is the kind who does not want an S-Class because he dislikes flaunting wealth. He doesn’t want a sporty car that stands out either, so he stays away from BMW. He buys the Audi because it combines the engineering brilliance of Mercedes and the sportiness of BMW, all into a package that, well, just sits there.You can call this lack of character or overt sophistication, but the fact remains that Audi has realised this issue and has changed with the new, smaller A4 and A6. Alas, they hired a chap called Walter De Silva who refuses to forget his Alfa 156 days and tries to drop the jaw (lowered front grille) of every car that he designs. He did that for a few Spanish Seats and now has done it again – the new cars sure look different but they wouldn’t get people to drop their jaws when they sight one. So, like it or not, maybe the A8 L as you see it in these pages is where the line has to be drawn as far as looks go. Mind you, if you opt for the W12-engined A8, then you get the ‘jaws’ again.   On the inside, the big Audi is better designed and put together than the competition. Not equally well-built, better built. You can see that attention to detail is of a higher standard and quality of materials, top notch. Notable new touches include MMI (similar but simpler than BMW’s iDrive – if I start explaining everything, it will run into pages), electromechanical parking brake (no more handbrake turns) and a trick moisture sensing system that reduces the risk of fogged windows. Brilliant automatic airconditioning (you really don’t notice any draughts, but if you insist, Audi will offer you an even more exclusive four-channel aircon as an option) and an optional Bose surround sound system made the rear seat of the A8 a more comfortable place than most drawing rooms. Make that my drawing room.

The A8 L available in India gets a 335 bhp V8 that displaces 4200cc and breathes through a grand total of 40 valves. The powerpack is linked to a quattro permanent four-wheel drive system that is simply the very best in the game of distributing torque and power. Being a long wheelbase car, with the additional leg, shoulder and head room at the rear, you may be better off spending time in the back seat. But if you decide to light up the asphalt to celebrate yet another boardroom victory, the A8 L will oblige. And how.  During our tests, the Audi posted 240 kph (we could have easily touched 250, trust us) and sprinted to 100 kph in 7 seconds flat. But it is not the torque, power and sheer speed that amazed me as I pushed this big-whale of a luxury car – instead it was the sheer quietness of the cabin, the total lack of vibration of any kind and – this is intended to be a negative – an almost eerie feeling that the car is driving by itself. The second generation ASF (Aluminium Space Frame) is to be thanked here. To begin with, it has changed big car architecture forever and has given the A8 a sense of lightness that can be perceived through the seat of your pants.   We had a bit of a test track, suburban crawl and an Expressway blast to get the A8 experience but we really missed some winding roads. The A8 has lots of aluminium bits (again, the metal keeps springing back into the story) in its adaptive air-suspension and it means different ride and handling for varying conditions. Lowering the ride height at illegal speeds improves the aerodynamics and helps you evade cops without burning too much fuel. This is the kind of machine that will waft you through Expressways and help you enjoy mountain roads with tauter handling. The permanent four-wheel drive system ensures that you drive like a hero through a series of corners. Active safety? Thy name is quattro!

The tiptronic box can be shifted using paddles and I found it easy to master – despite there being too many stalks behind the steering wheel. But then, with such prodigious torque and all the power, you really don’t have to go through such antics to get the A8 moving – just mash that right pedal down. Enough.

This is the fag end of 2004 and this, dear reader, is going to be one of the final test drive reports that I will be filing this year. It has been a year that confirmed my faith in my profession and one that gave me an opportunity to get behind the wheel of exotics such as the new Porsche 911, Bentley Continental GT and even a Maybach. If I had asserted my editorial powers, I could have stolen the Boxster test drive from Shumi and the new SLK test from Srini... but hey, these boys love their cars too. So where does the Audi A8 stand when it comes to this scale of things? Let me confess to you, the A8 L 4.2 quattro was not exactly a car that I was yearning to drive, and after driving the wheels out of one, I can tell you it is not a car that I would kill to own.

But then what is it? Well, one of the quickest, fastest, safest and ‘brilliantest’ automobiles ever created is one way of looking at the big Audi. Guess the car commands respect, after all. If you are considering a luxury car you should definitely try out the A8 L – with that stonking V8 under its hood and all that exotic metal, you sure get a great deal of value for money at just about Rs 70 lakh. But then do you really care?