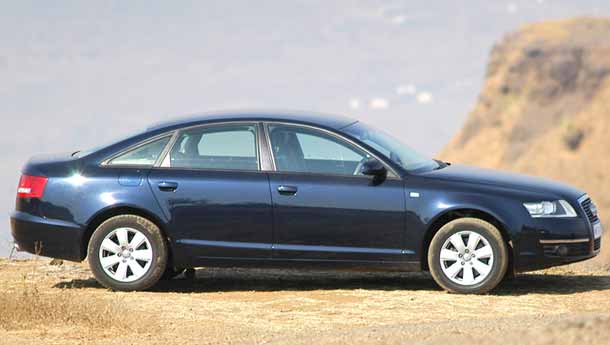 We have an unwritten rule at BSM. No single writer should write more than two or three test drive articles in the same issue. Here, I am breaking the rule. Because (a) The Audi A6 is the World Car Of The Year 2005 and I am curious to find out what is so special about it (b) I am the only one (ahem) amongst us who has driven the natural rivals of the A6 – the new BMW 5 Series and the E-Class (c) Since I am the editor, I bloody well can.


Bless those souls who have already read the road test reports of the Innova, Mondeo and the Tucson, because I think I have already used almost every conceivable word in automotive journalism – mind you, not just my vocabulary – to describe the above-mentioned cars. But as some wisecrack said when he was drunk, what is the harm in trying?

Actually I don’t think I will have to try any harder. It took me precisely 45 seconds to make out that Audi has moved the game ahead. Don’t believe me? Well, you will when you know that I had just got out of a magnificent blue SLK 350 with a gnarly exhaust note, and it would have taken something really special (especially when it has four doors and a roof) to impress a sports car buff. Really, the transition from the SLK 350 to the A6 hit me like a cool breeze. The front end of the A6 felt lighter than the sports car I was driving, and even with a proper roof in place and the additional elbow room, I was driving quicker in the Audi. The test results and the power-to-weight ratio may be stacked against the A6, but it ‘felt’ nimbler and more agile than the sports car, and we were not even driving the quattro four-wheel drive version.

Looks and design
Audis always looked good. But Audis always looked the same. If you follow BSM, you have already read Srini’s story (Audi do?, BSM December 2004) which detailed how one Mr Walter Da Silva and his design team decided to give some serious character to the Audi range. While the Audi A8L that was launched in India didn’t feature the famous ‘Bulgarian beard’ front end (only the 12 cylinder version of the A8 gets it), the A6 comes wearing one. Pictures don’t really do justice to the car – the new front end looks much better in the flesh and has given a certain degree of character and aggression that the last generation A6 certainly lacked. That said, the ‘C-top’ roof architecture from the last gen car is retained. The only area of criticism is the rear end – the last A6 looked fab with its perfectly rounded-off tail section with flush-fitting taillamps. That has gone now, and a chrome strip that connects the taillamps only adds unwanted clutter. Overall, the car cannot be termed handsome – aggressive, bullish, go-getter are words that come to mind.
Looks and Design: ****

Interior and comfort
Those who are familiar with French cars from the eighties, especially Citroens, will be at home in the A6. It certainly is not an interior penned by a single designer – a stroke or two by the leader of the team, a correction by a young aspirant, changes necessitated by safety regulations, marketing inputs... you can see it all in the living space of the A6. Yet it is a triumph of team spirit, as it all works together pretty well. While I like the effort that has gone into giving a great deal of aluminium and almost genuine looking wood finish, I cannot agree with the red-on-black display and that miniature ‘beard’ on the steering wheel. The famous Audi Multi-Media Interface (not very intuitive to begin with, but once you get used to it, you won’t be able to live without it) is carried over from the A8 – and that is one USP for the Audi against the
E-Class and the 5 Series.

The front seats are fully adjustable and the best in class for providing a great driving environment. The rear seat ‘tucks’ the passengers in well, but do not succeed in giving a luxury air. Well, the A6 is not exactly a chauffeur-driven car in its staple market, and it would have been nice to see Ingolstadt sprinkling a bit of luxury in the rear seat for prospective rear seat occupants/owners in important developing markets like India. That said, the rear seats are extremely comfortable for long distance travel. The rear legroom is not as good as that of the E-Class but more or less matches that on offer in the 5 Series.
Interior and comfort: ****

Powertrain and performance
Audi has homologated a ‘special’ model for India with a three-litre V6 engine driving the front wheels. This powertrain, we hear, is Asia-specific. While the much hailed quattro would have given the mid-size Audi an edge over its rivals, it does not disappoint in the front wheel drive format. The 24-valve V6 is strong on horsepower and torque fronts, with 218 bhp at 6300 rpm and 29 kgm as early as 3200 rpm. The driveline consists of an electronic differential lock (EDL), and as expected from cars in its league, a traction control system and the electronic stability programme with brake assist. The multitronic automatic tranny features the Audi dynamic control programme which, let’s say, is brainier than the normal torque converters.

It is beyond me why the keyhole is on the dash, and that too to the left of the steering wheel. On more than one occasion I twisted the neck of a poor control stalk thinking it will get the motor started. The engine gets on with its job like a candle – silent yet efficient. Though Audi claims 7.9 seconds for a 100 kph run, our test car managed only 10.1 seconds. I admit I was just about getting familiar with the multitronic box, and you are allowed to blame the road tester rather than the car for the two missing seconds. Normally we do two passing speed runs and the torquey V6 stunned us with 6.6 seconds for 80-120 kph and an equally impressive 7.1 seconds for the 100-140 kph runs. Enough to get us carried away and do a never-before-done 140-200 kph run specifically for this machine – the resulting 20.8 seconds is not exactly a record, but still.

The big V6 remains unstressed all the way up to 220 kph and it is only while nearing its top speed of 240 kph that you can sense the engine gasping for air. In short, this is not a very spirited powertrain but an extremely efficient and usable one. Audi could have programmed the automatic in such a way that more torque is given to the front wheels to assist better take-offs – but if you really want quick getaways, you can always order an RS4, right?

This engine choice can be termed a bit strange, since ours is a big market for diesel luxury cars and the all new 3.0 TDI V6 unit that drinks diesel and churns out more power than this petrol unit (225 bhp-45 kgm!) would have made a dent on the Mercedes E 270 CDI. Watch this space!
Powertrain and performance: ****

Ride and handling
Again, it is not the numbers that really impress you – it is the fluency with which things happen in the A6 that wins the case handsomely. The underpinnings of the car make you think that the car is precision-built, well-weighted and perfect for most things you do with a car. And if you are a road tester, you wouldn’t think twice before heading to the hills with this machine. We did exactly that and the A6 showed what a four-link front suspension can do to the dynamics of a front-wheel drive sedan.

Even without the aid of electronics, there was hardly any understeer to deal with even when the corners became tighter and cornering speeds higher. Power into a corner, resist the temptation to lift-off till the very last, lift off for a nanosecond, get on the power as soon as you hit the apex; that is how the flowchart of an A6 road test can be written.

Dynamically, this Audi is more BMW than ever before, but maybe not enough for rear-wheel drive enthusiasts to become converts. Also, I have tested the new 5 Series with active steering and think a high-powered, front-wheel drive car like the A6 can reap the benefits of a similar system. The speed-based power assistance of the A6’s rack and pinion unit, according to fellow road testers, was accurate while not being sensitive enough.

The ride quality on offer is best experienced on smooth concrete. It is a bit too thrashy on broken tarmac and you really don’t want to put it through bad roads – despite the Indian version featuring the  comfort/rough road package. Not that the ride is all that bad, but subjecting a fine bit of automotive machinery through terrible roads can break your heart, right? So leave bad road thrashing to the Mercs of the world, I say. If the A6 gets only four stars for ride and handling, it is only because we know that a quattro version exists.
Ride and handling: ****

Verdict
This is a state-of-the-art, sophisticated machine that is winning laurels around the world. Just take a look. It has won Europe’s ‘Auto 1’ title for 2005 – a competition organised by Autobild and its sister publications in a total of 21 European countries. The A6 won in five countries and won the final round that saw a 35-strong jury of experts (racing drivers, engineers and motoring journalists) subject the final candidates to an extensive test at a proving ground in Vizzola, Italy. The jury, according to the press release we have, was impressed with its dynamic performance, comfort, luxury equipment and excellent spaciousness. We agree, it makes for an excellent and one of the safest cars for Europeans. For us Indians?

It is a difficult thing being a prospective Audi buyer in India. You have to be rich, have good taste and be intelligent and deaf. Deaf to those around you who question the logic of not buying a ‘Mercedes-Benz’ with all that status aura around the three-pointed star. You have to be deaf to your enthusiast colleagues who wear BMW Williams T-shirts and drive Maruti Esteems to work. If you manage to do all that, buy the A6. And do carry a copy of this mag with you and show the doubters the headline of this story. After all, it is the World Car Of The Year 2005, and after an extensive road test, we are deaf to anyone who doubts its abilities.