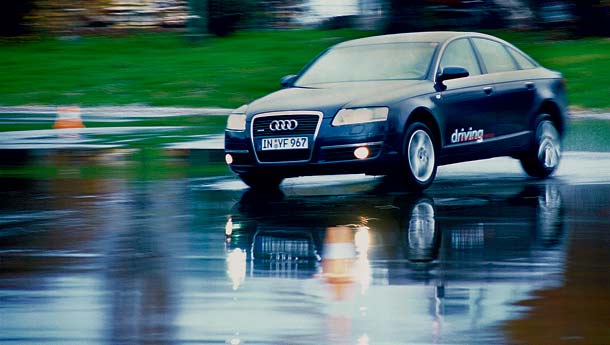 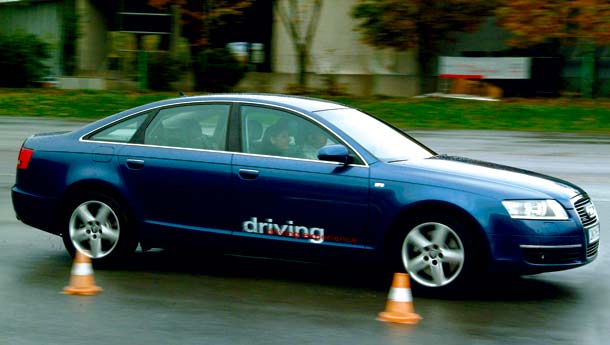 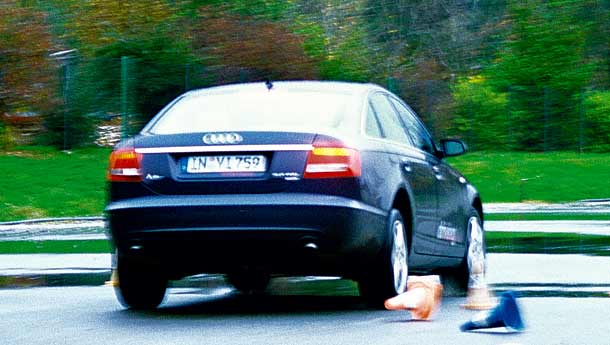 The roads around Seefeld in Austria are extremely picturesque. The terrain is hilly, so the tarmac tends to wind beautifully all over the landscape. Even the little towns that you cross are strategically placed and their little streets seem impossibly narrow. Just the perfect setting for taking a new Audi A6 and blitzing around, don’t you think? Well, I thought so too, but I am sorry to tell you I was being taught how to drive one around a driving course instead. In safe, sanitary circumstances, to do the least damage to the Austrian countryside as far as possible. Such is life.

No, I am not complaining, because I had one of the best days of my life, throwing an A6 all over in a manner that would, in normal circumstances, empty the bowels of any Audi official around. We were going through the Audi Driving Experience, a short one-day driving programme which was conducted by some top-notch driving training experts including an ex-Rally champ who counts Walter Rohrl as a friend. There, we were told how to sit in the car (yup), how to steer (yup), how to brake (yup), how to act when the car loses its tail, and how to get it back in control... essentially, the way you shouldn’t be driving on public roads.

It was great fun and a fantastic learning experience too, and I could tell you about the crazy stunts we did in detail, but I think you read up till here to know more about the other German luxury sedan that’s all set to make an Indian debut. So be it.

I just loved the futuristic look of the previous generation A6, with its beautifully curved roofline and rounded rear – I thought, heck, tomorrow is here today. I have seen a few gorgeous silver-coloured specimens on Mumbai’s roads and was thunderstruck by its understated looks. And then came the press kit and pictures of the new A6 in March 2004, when it was unveiled at the Geneva Motor Show. And I thought, there goes Walter De Silva again.   De Silva, who was poached from Alfa to head Volkswagen’s design, gave the new A6 a monstrous grille that evoked Auto Union’s Silver Arrows of yore. Thankfully, that roof arch was retained, but the A6 received a complete makeover that makes it extremely distinctive, even in an era of Chris Bangle’s flame-surfacing. The new A6 is bigger than the preceding model across all aspects, except height. The grille may look ungainly in the pictures, but in real life, the A6 looks absolutely smashing and superbly proportioned. Achim Badstuebner, senior designer for the A6 exterior, whom we journalists later met, took us through the evolution of the Audi design over the years and explained how the latest iteration is within the overall theme of the Four Ring’s luxury sedans design, and how its fine lines look deceptively simple. What’s new, however, according to me, is a new-found aggressiveness at Audi, without losing its core dynamic but uncluttered lines.

The A6, which is in direct confrontation with the E-Class and the 5 Series, comes with a sterling build quality that makes even Mercedes-Benz and BMW turn a darker shade of green – Audi’s assembly of the car is quite hi-tech. Speaking of technology, even the Multi Media Interface system inside, though extremely advanced, offers you zillions of customisable options without confusing the hell out of you. The entire interior design, unlike the E-Class, clearly is devoted to the driver. There are plenty of buttons to play with, even on the neat four-spoke steering wheel – again, they are intelligently laid out. Along with the MMI, they will keep your chauffeur occupied while he’s waiting for you. If you want to keep him really busy, you could ask him to search for the handbrake. You see, Audi has done away with the clunky handbrake lever we are so used to, and instead have given an electromechanically activated button. Press it, it activates the parking brake, and to release it, simply accelerate. I expect this feature, which has been lifted from the premium A8, will make handbrake turns a thing of the past.

I drove two A6 versions, the 4.2 Quattro, with a smashing V8, and the 3.0 TDI. But I’ll tell you about the V8, as I have a driving impression of the A8 3.0 TDI in the following pages. Displacing 4163cc, this V8, with a five-valve per cylinder layout, develops 335 bhp at 6500 rpm and a staggering 42.3 kgm at 3500 revs. Based on whatever little I drove on the test-track, I can tell you that it’s blazing quick and pins you to the seat when you give it the stick. This, not with a manual tranny, but one of Audi’s Multitronic gearboxes, a six-speed continuously variable unit with a manual override and sport mode too. The power delivery is seamless and there’s so much of power reserve on tap that I wanted to say goodbye to everybody at the track and head on to the autobahn towards Munich and Stuttgart. Yet it’s not unfettered raw power that comes out in an explosion, but more controlled and precise, in a manner that befits a car in this segment.   I could have covered the distance effortlessly, as the top speed of the A6 4.2 has been electronically limited to 250 kph. And it’s blisteringly quick too, as Audi claims just 6.1 seconds for 0 to 100 kph dash. With that sort of power, it’s no wonder that the normally front-wheel driven A6 has been given Quattro permanent four-wheel drive. Which means the car is terribly grippy and supremely surefooted. No compromises on the suspension front either. A four-link suspension, with upper and lower wishbones, does duty at the front, while a trapezoidal-link setup, borrowed from the A8, is used at the rear. The A6 I drove rode on 225/50 R 17 Michelin rubber, larger than the ones on the preceding model. After a couple of slalom runs on the track, the A6 came across as a luxury sedan that doesn’t want to throw its weight around. It’s taut, and doesn’t wallow like what you’d expect from a large car like this. In fact, the new A6’s body rigidity is up by 34 per cent, which means less flex. If it’s your chauffeur who’s going to drive your car, well, he’s a lucky guy.

In India however, the V8 is not coming. As you’re reading this, Audi is going through the process of homologating a 3.0 version, designed specifically for India. In other words, it’s not part of their international line-up yet. The 3.0, with the Multitronic transmission, is powered by a 2976cc V6 petrol unit, producing 218 bhp at 6300 revs and over 29 kgm at 3200 revs. It will however ride on 16-inch wheels, but will come with all safety goodies as standard. Expect it to be ready by January 2005, for Rs 40 to 45 lakh. Yes, a little above the E 240 but with a bigger, more powerful engine. Perhaps worth it for those who know what Audis are all about, and more importantly, who want to show that they’re different. Besides, it’s a new car, even internationally – even the all-important US market received the A6 just a month back.

We surely will test the 3.0 V6 and let you know how the India-specific Audi A6 is like. It does promise to be exciting, and will be more of a driver’s car than the E 240. Picturesque roads or not, I can’t wait to get behind the wheel and take it to, ahem, Pimpri in Pune.