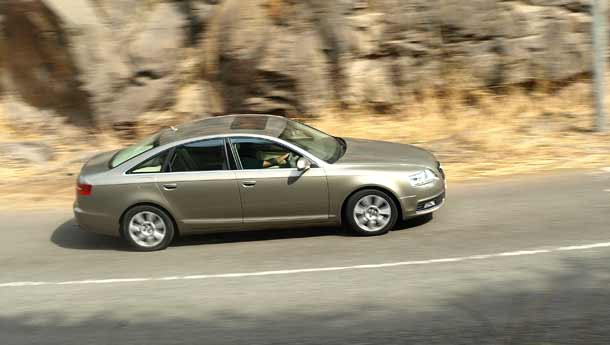 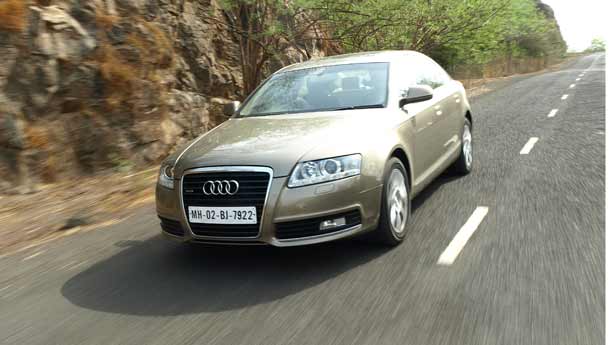 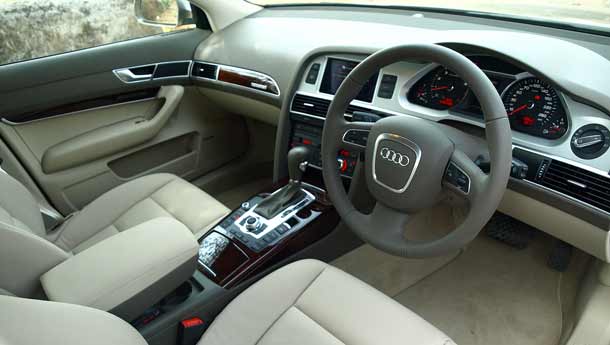 Exploring the dynamic limits of a Rs 60 lakh car should not be done in front of a camera. I mean, it won’t be nice to be photographed as you dump all that expensive glass and metal onto unforgiving rock and emerge from the mess with airbag dust all over you, right?

The road surface at Isle of Man (that is what we call our favourite bit of accessible and twisty road on the outskirts of Mumbai) has been deteriorating over a period of time and there was loose gravel at almost all corners. I was giving a few runs for Pablo’s Nikon and was getting progressively comfortable with the concept of carrying speed into corners. The new improved Audi A6 with a blown V6 had impressed me all morning with its prodigious torque. Then, as I hit a corner at near three-digit speeds, I let my eye shift from where I was supposed to be going to where Pablo was standing – on top of a small hill. The car ran a little wide and on to loose stuff – enough to unsettle the tail of the near two-tonner. The ensuing slide was spectacular enough to startle me if not long enough to be captured by the Nikon. The right dose of reflex-lock from me straightened the car but what happened after that was pure magic – rather an act of Quattro, if you insist. Power from the offending wheels was taken away and sent to those with more traction and the big Audi emerged out of the corner carrying more speed than what it entered it with... and throughout the process, my right foot remained planted.

So there, in a little move, the ‘new improved’ A6 reminded me why one should consider it over a BMW 5 or a Mercedes E – Quattro! But the new flagship of the A6 range gets a spanking new motor and a host of small changes that makes this, a former World Car of the Year winner, an even more accomplished machine. Let’s get closer.

Externally, there are a few subtle changes which include the single-frame grille, redesigned bumpers and fog lamps, though the most noticeable feature is the now common LED strips and integrated running lights. New wheels are not as evocative as the ones in the past model and the changes at the rear are limited to a splash of chrome and a hint of a spoiler. And yes, more LEDs. Honestly, I like the ‘blunt weapon’ image of the A6, especially when seen in darker hues, and am glad the facelift has not tried to change much for change’s sake.

The interior of the A6 has been ‘The Standard’ for quite some time now, and as mostly is the case with good design, it is all down to the details. The ‘lounge’ concept is carried further with softer leather that pampers your elbows – at least that is what I noticed the most. The test car came equipped with Bose speakers and even the local radio jockeys sounded good on it. Really.

This mid-life facelift of the A6 means there will be four engine options for India – two petrols and two diesels. The basic petrol engine is a new variant of the 2.8-litre FSI unit that is good for 220 bhp and features Audi’s valvelift system. The diesels are legendary TDI units that displace 2700cc and 3000cc respectively to develop 190 bhp and 240 bhp and 38 kgm and 50 kgm of torque respectively. Of course, we had to have a go in the very best of the species, which meant the top-of-the-line V6 petrol with a 3000cc heart and a rather healthy 290 bhp under its bonnet. This is a TFSI engine with the T now standing for force induction in general (and not just turbocharging) and in this case the car gets breathed on by a supercharger.

The result, dear reader, is the reason why this road test report is a 1,000-word plus affair. Compared to the older 3.2 litre FSI engine, the new motor improves the power-to-weight, specific output and torque-to-weight characteristics of the A6. Typical of a supercharged engine, power delivery is spontaneous and 42 kgm of torque surges throughout a spirited acceleration run  from 2500 to 4850 rpm. Despite the new car being heavier by 155 kg, the car accelerates to 100 kph in 6.6 seconds flat and can easily achieve the top speed of 250 kph (governed).

As this surge of power is enjoyable day in-day out, the trade-in could be a bit of driveability. Rohin, our road tester, found progress through traffic ‘jerky’ and he blamed it on the surge of power and throttle sensitivity, which for some strange reason, I never really noticed. What I did notice was the absence of keyless start and lack of paddle shifters. The latter is sorely missed in a car that is blessed with this er, super engine! Also, the test car came without the optional ride height adjustment – a boon in our road conditions.

I got a chance to sample an E 280 CDI just after I tossed the key of the A6 back and I have to say that the mid-size Mercedes rides better on Indian roads and more so, as experienced from the rear seat. And that is a critical fact that Audi India needs to address by sending this feedback straight to the R&D guys at Ingolstadt. It is a combination of the tyres and damping (Bridgestones in the test car) that results in the rear passenger being constantly told of the undulations of the road surface and it is something that can be sorted out. That said, the A6 is a sportier machine and those who enjoy their driving will actually appreciate the feedback sent to the driver through the seat of the pants. And again, when you approach a corner at three-digit speeds and find loose gravel at the apex, you will swear that the on-road price of Rs 58.8 lakh is justified.