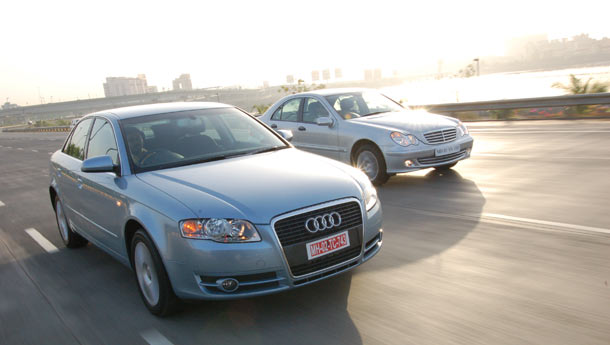 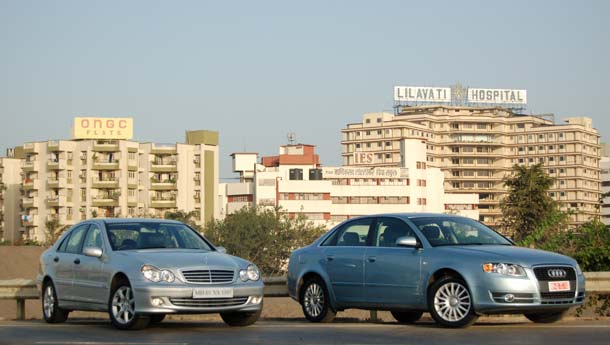 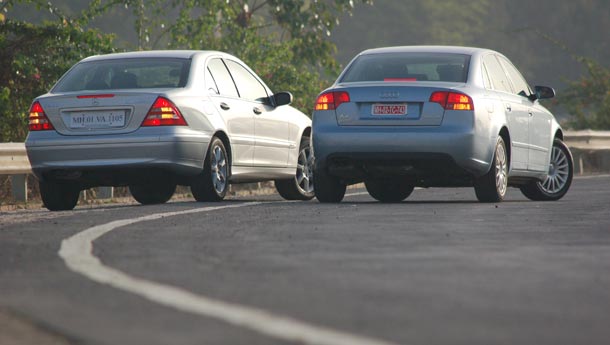 Let me tell you a funny story. It really happened, OK? There is this smart-ass driver working for a luxury car dealership here in Mumbai -I won’t tell you which one, all I can say is that they sell German cars that wear a badge which begins with a B and ends in W and has a blue-and-white logo. Didn’t get it? M’s the word. Anyway, this dude came for our three German luxury car comparo, looked intelligently at the Audi A8 4.2 Quattro, twirled his sunglasses and asked the Audi representative, ‘Is this front-wheel drive or rear-wheel drive?’ The dismissive response from the Audi man – ‘Quattro. All-wheel drive’ – shut him up for the next few hours he was with us.

If you’re reading this to decide between the Audi A4 and the Mercedes-Benz C-Class, only to sit in the rear seat and let your chauffeur do the driving, I suggest you take him along for a test-drive, check out the back seat comfort of both cars and then take a call on which is the one for you. And let your chauffeur read this piece instead, especially if he is as oversmart as the above-mentioned individual was. Because here we’re talking not just about two German diesel saloons taking on each other, but about the bigger battle, that of rear-wheel drive versus front-wheel drive.

Now, Audi follows the principle that front-wheel driven cars are safer than rear-wheel driven ones. Their thinking is that not all drivers can handle a RWD car, especially in critical situations. At these times, according to them, normal drivers can handle FWD cars better, as their instinctive reactions in sticky situations and the predictable nature of FWD cars go hand-in-hand – adding a dab of opposite lock when faced with a degree of understeer comes almost naturally, doesn’t it? This is fine in case the car is not extremely powerful. So what happens when there is plenty of horsepower and torque to play around with? Then, Audi says, the solution is all-wheel drive – this is where Quattro comes in. Great, so much for philosophy. But what we have here is two adequately powered ‘entry-level’ German luxury sedans that drink diesel. The Audi A4 is the new kid on the block, taking on the establishment in the form of the Mercedes-Benz C-Class. So which one takes our vote, the challenger or the challenged?

Have a look
Right from the time you first lay your eyes on them, the crisp, fresh lines of the Audi grabs all the attention – but that is mainly due to the ubiquity of the Merc. Though an all-new C-Class is due only next year, the current one still looks sharp and sporty, thanks to its aerodynamic, wedge shape. The novelty value of the fused headlamps doesn’t excite anymore, nor do the triangular taillamps that almost look opaque these days. Still, the overall silhouette of the Mercedes is much more dynamic than the conventional shape of the A4.

To me, the blame lies in the A4’s roof arch – its other siblings and even cousins from the Volkswagen fold have these wonderfully curving swooping rooflines that make these machines absolutely distinctive. Though that can sometimes lead to reduced headroom for rear passengers, they make Audis and VWs stand apart. Also, when you look at its elder sibling, the A6, you see a subtle interplay of surfaces that makes it muscular from certain angles, which is absent in this car. Still, the A4 has some redeeming features, especially the distinctive headlamp/taillamp treatment (which makes it look different from the A6 and A8), and of course, that beard of a grille which seems just a little disproportionate in a car of this size. Plus it looks much bigger than the C-Class and feels as if it has more sheetmetal on offer – which could make potential buyers positively disposed towards it.

But remove the layer of newness from the Audi and you get a car that is not very imaginative in overall design. So our vote in this round goes to the C-Class, which in spite of its age, happens to look much more sporty – in fact, it looks more of a driver’s car than the Audi (driver as in self-driven, not the chauffeur!).
Audi A4: ***
Mercedes - Benz C220 CDI: ****   Live-in relationship
It’s a different story inside, however. The typical Mercedes layout for the interiors is now beginning to show its age. Though it oozes quality, it lacks that extra panache that the Audi offers. Both cars cosset the driver and single-mindedly ensure that the driver is the centre of attention. Both have almost identical instrument consoles with digital information displays. Both feature multi-function steering wheels, though the Audi’s thumb-scrollers (that’s my word) need a little getting used to when you want to increase the volume or navigate through the driver information display – they can be a bit cumbersome vis-à-vis the neat buttons of the C-Class steering wheel. But I would rather be in the Audi because it does make you feel extra special thanks to the materials used, the premium feel, the way the brushed aluminium strip runs along the entire dash. And I instinctively like metal over wood, even if the wood is real. Kind of makes it feel futuristic.
Audi A4: ****
Mercedes - Benz C220 CDI: ***

Walk the torque
Beneath the hoods of both cars are inline-four turbodiesels. While the Mercedes uses common-rail direct injection, the Audi obviously goes for pump injector technology – same destination, different paths, one outcome.The C220 CDI’s 2148cc motor develops 141 horses at 3800 revs and 32.1 kgm of torque at 1800 rpm. The A4 2.0 TDI engine has less cubes than the Merc at 1968cc and it offers 134 bhp at 4000 revs, while matching the C220’s torque figure, but at 1750 revs. While the C220 gets a five-speed automatic transmission as well as a six-speed manual option, the Audi comes with a de facto five-speed Multitronic continuously variable transmission.

Refinement levels in diesel engines may be getting better, but still, there’s no way you can ignore the clatter that emerges from the A4 2.0 TDI. Luckily, when you’re inside the car, it’s so well-built that the sound and the vibrations don’t get through to you – leave the unpleasantness to the hve-nots. Snick the lever into D and the A4 takes off without any hesitation. The engine, even with less ccs to go around compared to the Merc, doesn’t feel wanting. The C220’s unit, on the other hand, is a bit better when it comes to refinement. It doesn’t sound as gruff as the Audi, except during the time it takes to warm up. Once on the move, the Mercedes engine comes through as a long-distance runner, as compared to the Audi’s ready nature.

But the true test of the engine comes through in the numbers. Though the Audi is slower to touch the 60 kph mark from standstill (5.04 seconds, as compared to the C220’s 4.5 seconds), it more than makes up once it goes beyond that. Except for the dash to 60 kph, the Audi comprehensively thrashes the Mercedes in every other acceleration run. In the 80-120 kph run (7.86 seconds vs the C220’s 9.2) and the 100-140 kph dash (7.15 seconds to the C220’s 8.5), the Audi engine shows its real strength. It is remarkably strong in the mid-range, so much so that if you espy a C220 driver cruising at 100 kph, you can easily overtake him and it will be difficult for him to catch up. But remember this, the C220 is no slouch, its mid-range is pretty good when taken by itself, it’s just that the 2.0 TDI’s power delivery is one level above. So even if it is not as refined as the Mercedes’ unit, the performance figures simply overwhelm that little sore point.
Audi A4: ****
Mercedes - Benz C220 CDI: ****   The drive
Aah, here comes the crunch. Somehow, Mercedes always manages to define what ride quality is all about. The C-Class’ independent three-link setup and multi-link unit at the rear is tuned to be more sporty than let’s say, the E-Class. So, if the back seat is going to be your habitat in the C, you may find the ride a bit harsh (hey, I paid for a luxurious ride and it’s missing – but that’s doing injustice to the innate nature of the car). However, this is just what I would expect from a self-driven luxury sedan with some bits of sportiness thrown into it. The A4’s four-link/upper and lower wishbone setup at the front and subframe-mounted trapezoidal link rear suspension is that way more suited to rear passengers. And it’s the kind of ride quality that will get a thumbs-up from most of its prospective buyers. It does a good job of keeping rough patches where they belong, without compromising on the handling front.

But being rear-wheel driven, the C-Class caters to that section of people, true driving enthusiasts if you may call them, who think thisis the way luxury sedans have to be powered. It is not for nothing that those Ultimate Driving Machines (yes, the same ones sold at the aforementioned dealership) are most often rear-wheel driven. Under hard acceleration, the C-Class will oversteer, which could be quite a handful to control if you don’t anticipate it. On the other hand, the front-wheel driven Audi seems that much more immediate and instantaneous – in most of our driving conditions, you will appreciate this nature, which makes it fun to drive. It’s only when you head out on the highways that the Mercedes comes into its element. Besides this, the Mercedes has a better front/rear weight distribution, which makes corner carving much, much more engaging than with the Audi. And this is what I would go for, powering into one corner after another, with the rear wheels pushing the Merc out from the apex. So it’s like this: you may enjoy the Audi’s liveliness in most day-to-day situations, but over a long journey, I will bet you’ll emerge still fresh after spending hours in the C-Class. Yes, it’s a tough choice, but life is like that.
Audi A4: ****
Mercedes - Benz C220 CDI: ****

The verdict
Okay, this is not going to be easy. To sum up, the Mercedes looks sporty, but its interiors are not as hot as the A4’s. And the A4’s powerplant, though a bit rough on the edges thanks to Pumpe-Duse, simply outclasses the C220 CDI when it comes to outright acceleration. And both cars have their strong points (or weak points, as the case may be) when it comes to ride. But when it comes to handling, the front-wheel driven A4 is more than satisfactory in most everyday situations, while you just want to sit in the C220 CDI and drive to Goa. And when it comes to the price, both are again pretty much evenly matched (at these levels the Rs one lakh premium the Mercedes commands doesn’t really matter.)

So here goes. If you are going to be chauffeur-driven (and you’ve read all the way till here), don’t hesitate, just pick up the Audi. The engaging engine, the seamless CVT and the rear-passenger friendly ride quality will ensure that you will be ferried around in decent comfort. And you will look good when you step out of a car that’s still rare in our country. But if you do the driving yourself, the C-Class is where it’s at. Go buy the C and sack your chauffeur, even if he knows almost everything there is about front- and rear-wheel driven cars.