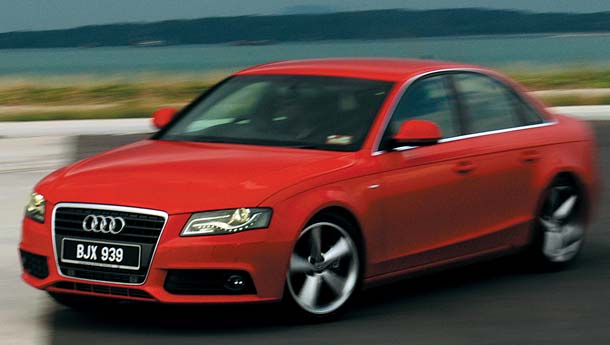 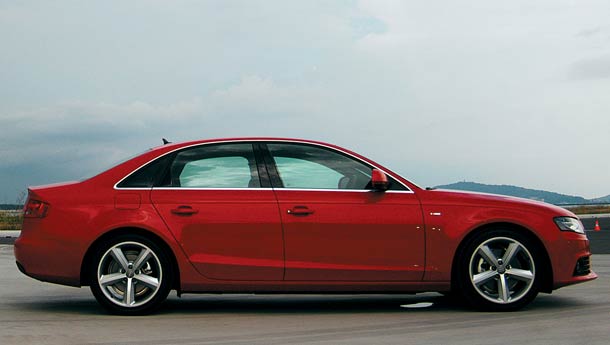 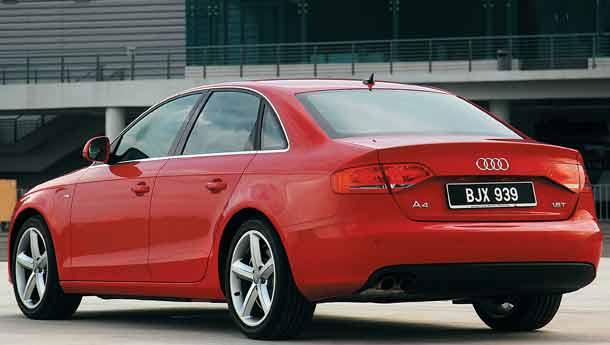 Audi’s a bit late, folks. The current D-segment executive sedan game has two behemoth players in it (both of whom are Audi’s countrymen), and between them they produce two of the finest automobiles on the planet – the C-Class and the 3 Series. Moreover, Audi’s German brethren unleashed the latest versions of their volume sellers well before Audi did, and with particular respect to India, the C and 3 have far outstripped the A4 in terms of sales. There are several reasons for this – Audi didn’t really push the car hard here, opting to concentrate on the A6 instead, and in any case they struggled with the limited number of showrooms they had. The most important factor was the car itself, however; although not a poor automobile by any means, it simply didn’t have enough going for it in terms of trim levels and engine specifications. The petrol version had the same engine as the Octavia RS, for example – which can be quite a dampener for prospective buyers.

Essentially, the car existed almost entirely as a token presence in the model lineup in India, with sales of the more luxurious models paying the rent, as it were. Audi also knew that an all-new A4 was in the pipeline, so to give them the benefit of doubt, perhaps it was a case of holding out until the real deal came along. Whenever it did, however, it was going to have to be a pretty serious upgrade in order to force people to part with their hard-earned and not opt for either of its competitors instead.

Well, I was in Singapore, at an aviation expo ground next to Changi airport, looking down a 300 mm telephoto lens at the new A4 magnified right up close, and I have to say that it looked like the real deal. Gone was the bland, even slightly dowdy, appearance of its predecessor; instead, the new boy looked taut and muscular, like an Olympic swimmer in a T-shirt. Especially from the front three-quarter view, with a set of gorgeous 5-spoke alloys, the car had a new-found dynamism that was missing earlier; its overall lines were tight, and the flanks were nicely contoured. It was clear that the word ‘sporty’ must have appeared severally in the design brief, and there’s no doubt that Walter De’Silva and co have achieved this admirably. Looked at head-on, the combination of the headlamp cluster (with extremely cool LED running lights in the S-Line trim and above), aggro air-dams and that distinctive beard-grille make it look quietly menacing, especially on an all-black car. The raised edge of the middle of the bonnet (which could have been a design-pitfall) has been cleverly disguised, so you barely notice it. The car has a definite edge to it, which is not something that could have been said of the old model. On the debit side, the rear isn’t quite as sharply styled as the front, as if it was decided that an all-out dose of aggression might alienate potential buyers. In this regard, both the C-Class and the 3 Series are arguably more complete designs; still, there’s absolutely no doubt that showing up in a bright red (or elegant silver) A4 is going to get you a lot of admiring looks.   What might also get attention is the car’s size; at a not-inconsequential 4.7 metres in length, the A4 is bigger than both its rivals, and in fact its wheelbase is only 35 mm less than its sibling, the A6. What Audi did was to mount the front differential ahead of the front axle, thereby allowing a wheelbase extension, and also ensuring that the front overhang was kept to a minimum. This also means that the rear seat is a pretty roomy place to be, which should be good news for potential buyers in our country. Not that the car is any heavier for it, mind you; Audi claims that with the use of super-strength steel and aluminium, the bodyshell of the A4 is both stiffer and lighter than the outgoing model. In effect, even with the addition of more standard features, you’ll get a car that weighs much the same as the old model – another definite plus.

Audi has long been the benchmark when it comes to the quality of interiors, and this car shows no signs of bucking that trend. Everything about it positively reeks of high standards – the stitches in the leather seats, the brushed aluminium inserts, the feel of the gear lever, the works. It’s a classy, sophisticated and quietly understated interior to be in, and should find approval with just about anyone. Standard features include a 6-CD changer, memory functions on the front seats (in the petrol car), an acoustic front and rear parking system, leather upholstery, a full complement of airbags and automatic air-conditioning. More money buys you, among other things, a rearview camera for radar-assisted parking, Audi’s Multi Media Interface, Drive Select (more about this later) and a Bang & Olufsen sound system.

Audi had organised a series of low and high-speed slaloms, an 80 kph lane-change manoeuvre, a 60 kph brake test in the wet and a 20-minute, 60 kph convoy drive in a quiet part of the city. These aren’t ideal parameters to go by if one wants to develop a comprehensive opinion of a car’s capabilities – especially on roads as smooth as the ones in Singapore – so we’ll have to wait for the A4’s India-launch to test it properly. However, I did get to experience Drive Select, which allows you to choose ‘auto’ (self explanatory) or switch to ‘comfort’ and ‘dynamic’ modes. The last named also quickens throttle response and adds weight to the steering, apart from switching the (optional) automatic transmission to a faster-shifting map. During the lane-change and braking test, ‘dynamic’ mode definitely made it easier to throw the car around without upsetting its balance; the steering response was that much sharper and the brakes bit more quickly too. There’s also an ‘individual’ setting, which allows you to combine different settings.

Overall, the new A4 has a sharp, responsive feel to it, with its improved front/rear weight distribution (the battery’s been shifted to the back, apart from the front diff being moved forward). Even though quattro is in operation, the car feels nicely biased towards the rear, because the front/rear torque split has been changed from 50:50 to 40:60. For those whose principal complaint with Audis has been that they’re a bit ‘cold’ to drive, this should be good news. The car is quick and eager to turn in, with very little understeer, and the engine is predictably superb, delivering a seat-of-the-pants 0-100 kph run of 7 seconds. It must be said, however, that those used to a BMW’s level of hardcore driver involvement will be underwhelmed by this car. Even in ‘dynamic’ mode, the steering doesn’t feel as tactile as the one in the 3 Series; it suffers both in terms of weight and feedback when compared with the BMW. What the Audi does offer, and this is something that will benefit 90 per cent of buyers, is plenty of grip and a very neutral, nicely balanced chassis.   Here, then, is a segment-enhancer rather than a segment-buster. The new A4 is unlikely to make BMW and Mercedes fans jump ship en masse, especially those who like a bit of an edge to their driving or a star to guide their way. The price of the new A4 – Rs 29 lakh for the 2.0 TDI and
Rs 36 lakh for the 3.2 V6 (ex-showroom Mumbai) – is more or less at par with the other two Germans, though the petrol A4 will come pretty well-loaded.
What it will definitely do in India is to provide an alternative to those D-segment buyers who are keen on something different, and who have stayed away from Audi all this while because of the weaknesses of the earlier A4. Make no mistake – this car is a vast improvement in every possible way over its predecessor and a much-needed evolution. Only a full test and a head-to-head against the 3 and C will tell if it’s the new king of the hill, but the important thing is that it’s now a serious contender.