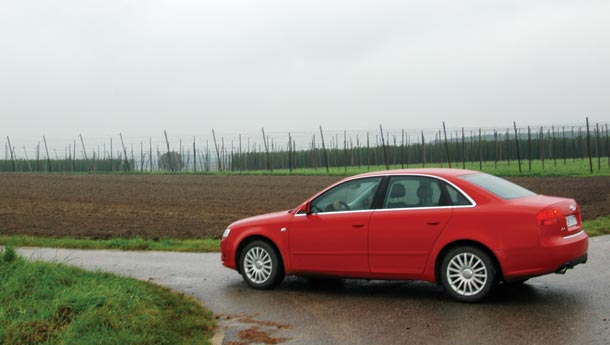 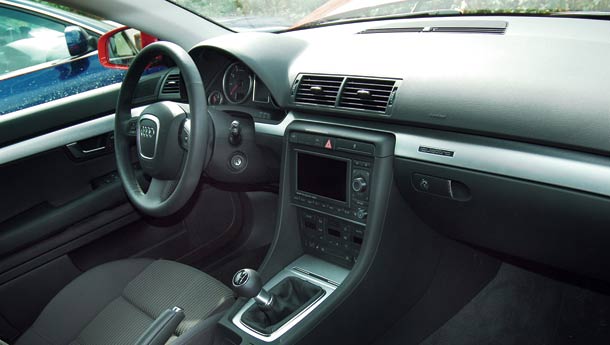 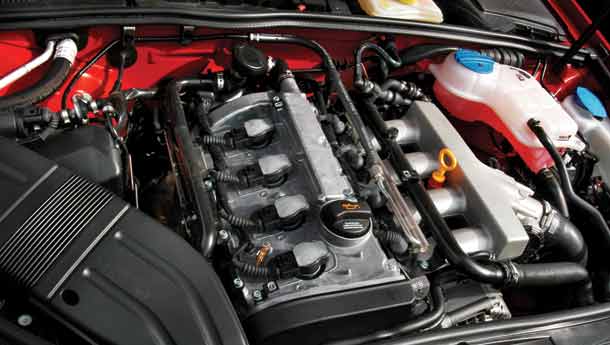 It’s been less than ten minutes since I got behind the wheel of the scarlet Audi you see on these pages. Moments ago, we were taking pictures of the car in and around a small, rain drenched village somewhere near Ingolstadt, Germany. I reprogrammed the navigation system and headed out to the designated lunch spot. Sure, I have driven in left-hand drive territories before, but on this occasion I managed to terrorise myself.


A sharp left into an autobahn approach, a kinky clover leaf and a fast-moving truck in the slow lane usually mean trouble. The truck-driver couldn’t have seen me as I eased gently into the merge-into-autobahn-without-causing-trouble zone. Then a glance at the rear-view mirror and I saw disaster written in bold. A quick click of the gear lever to second and the A4 throttle was floored in the nick of time. A short prayer in my mother tongue ensued. The 1.8 Turbo that I was driving got the message instantly and sent all the 22.5 kgm of torque available to all four wheels.

It certainly was one of the quickest acceleration runs I have done in real life conditions and I squeezed into the slow lane before the Audi 1.8T and I got immortalised in an armco barrier. The rear view mirrors had MAN written all over them, but I had enough gap to shift to third and move into the second lane. The faint whistle of the turbo could be heard and there was no drop in revs as another jab brought the Audi into fourth gear and into the empty fast lane. I could see the massive truck in the corner of my eye now and as the Audi climbed to 200 kph it became a distant speck. If there were speed cameras in this part of the world, Audi certainly would have got a speeding ticket sent to them. I am sure they wouldn’t mind, since no speeding ticket could have equalled the value of a brand new A4 1.8T quattro.

The best part of the whole exercise was that Yogi, as in Yogendra Pratap, executive editor of Overdrive and my passenger at that point of time, didn’t even know what I was doing. No, he didn’t even notice the drop of sweat that gently rolled down my forehead. Brilliant.   Now, such berserk acceleration antics come naturally to this powerplant – the one that is slated to power the A4 when it hits Indian roads early next year, and one that we are quite familiar with in the maverick Skoda Octavia RS. What is not coming to India, though, is the quattro powertrain that would jack up the price of the car enough to make it not so competitive in a segment dominated by the Mercedes-Benz C-Class. But does the A4 pose a real challenge to the baby Merc, or for that matter, the BMW 3 Series that is to be built in our country soon? Buckle up as we continue to storm the autobahn.

I know what you are thinking – this guy goes to Germany and drives an Audi A4 at its 228 kph top speed for a whole day, so what verdict can he give? Well, to be honest with you, nothing much. A better test would be my regular commute between Thane and Mumbai in crawling traffic, but then trust me to do it as and when I get a chance. But you wouldn’t mind me having some serious fun in the process of finding out what an A4 is actually capable of, right?

Just to let you know, I also drove a gun-metal grey Audi TT propelled by a massive 3.2 litre V6 engine that transformed the little coupe into a very comfortable, four-wheel drive go-kart. Throwing it between corners and relishing its bassy exhaust note echoing off the hillside provided enough entertainment for me not to get carried away by this red sedan.

In the A4 hierarchy of things, the 1.8T motor is kindergarten stuff. You will agree with me if you know that the same platform gets powered by a 414 bhp, monster V8 in the RS4 version. Then there is the 250 bhp V6 or a 200 bhp four-pot to choose from. Add to that a pair of TDI engines capable of 140 and 204 bhp, and you know where we stand.   I will never be able to pronounce Vorsprung durch Technic the way Srini does, but this Audi philosophy is best understood through the seat of your pants. This is a well-built car that uses a lot of quality materials like aluminium and even magnesium, and you don’t have to break a land-speed record to find that out. Ride quality is sublime over smooth roads and even the basic A4 can rival some traditional sportscars when it comes to road holding and handling. The dynamics are taken care of by a four-link suspension up front and a trapezoidal-link rear setup. Audi likes to use the word ‘elastokinematics’ a lot, and to you and me, that means the spring and shock absorber settings have been fine tuned to offer balance of a very high order.

I have driven the A6 and I can tell you that the A4 is equally capable when it comes to shrugging off twisties – and we are not even talking about the quattro version (we got to drive both the 1.8T and the 1.8T quattro). The four-wheel drive car gives you enough confidence to carry insane speeds even when rain gods find their rhythm. Yes, it was pouring at one part of the test loop (in case you didn’t make out from the pics) and I didn’t feel the need to go easy on the right pedal.

Hey, I don’t have to use that favoured line of Indian motoring journalists which goes like this: ‘we ran out of road before we could hit the top speed.’ Because I didn’t and the A4 (sans quattro) I was driving was nailed to extract a clean 228 kph... alright, the damn needle didn’t move after that! Which I think is a phenomenal thing about this four-pot powered sedan – because you can have all of twelve cylinders, as in the Audi A8 W12, and it will still be restricted to 250 kph in Germany. Even at full wick, the road and wind noise is extremely acceptable, though the turbo-motor feels a bit thrashy. Audi promises a 100 kph run in 8.6 seconds, which is just as quick as the Octavia RS. But comparing the Octavia with the A4 will be a terrible thing to do since the Audi has superior dynamics, much more comfortable interior appointments and, lest I forget, a perfectly formed body.

Expect Audi to price it in the Rs 20-25 lakh segment as and when the A4 is unleashed on Indian roads. Yes, the all conquering Mercedes-Benz C-Class has a worthy rival... watch this space.