At the last moment... 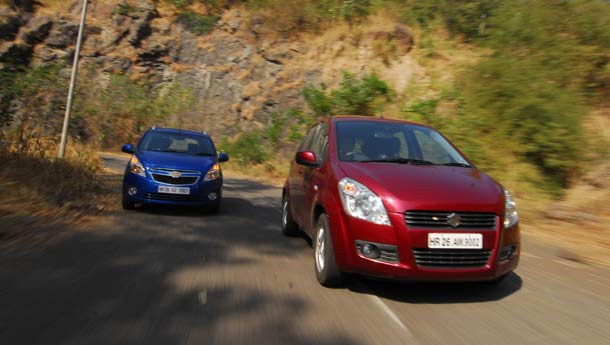 He made a surprising choice. But it’s the right one. Anand is a great friend of mine. He is from the creative field – he’s a designer – and sketches and paints wonderfully as well. Anand was ready to replace his five-year old Alto with something bigger, and lucky for him, the choice in small cars was pretty vast. After a lot of test-driving and checking out various cars, he finally zeroed in on the Maruti Suzuki Ritz and the Chevrolet Beat.

His experience with owning the Alto was good, so he had no issues in going back to the Suzuki fold. Besides he knew the good things about the Ritz – the brilliant engine, the feeling of space inside, the supportive seats, the nifty handling and an excellent steering. The negatives were of course its low-speed ride quality, boot space and the quality of plastics. And then temptation happened, in the form of the Beat.

Though the negatives of the Beat included its narrow body and small boot, and of course, the noisy engine and the recalcitrant gearbox, it had a whole lot of stuff going for it. The artist in him was taken in by the superb form of the little Chevy and he was captivated by the beautifully designed interiors that looked so awesome when the night came down. Then there were the other feel-good bits like the coupe-like shape because of the placement of the rear door handles, the quality of the plastics and their forms, the interplay of grey and black, the sheer look of the car in a vibrant shade of red, the roof rails, decent rear legroom, the figure-hugging shape of the seatbacks, the motorcycle-like gauge, the sporty, good-looking steering wheel... phew! The immense effort that General Motors has put in to the make the Beat completely different from ANY of the many small cars available in the country should be applauded.

As if that was not enough, the fully loaded Beat was cheaper than the Ritz VXi. What else would somebody like Anand want?

Well, he still had to test-drive both the cars, didn’t he? So Anand drove both the cars for several kilometres. Coming from the Alto, both cars were different for him. They were taller, but the controls, the ergonomics and overall quality were much better than what he was used to. After driving both the cars, he made his decision.

It would be the Ritz. I was thinking all the while that since the Beat catered to his creative sensibilities, he would go for it. Besides his driving is limited to short distances within Mumbai and he wasn’t what we’d label as an enthusiast. So steering feedback and handling was not something he consciously looked out for.

Yet he went for the car which was better to drive – despite it being more expensive, lacking in feel-good features and generally under-specced compared to the Beat. Though the Beat has conceivably everything you’d want from a trendy, state-of-the-art small car, it failed where it mattered the most – the powertrain. At the end of it, a responsive, refined and peppy engine and a snappy gearbox won the battle!