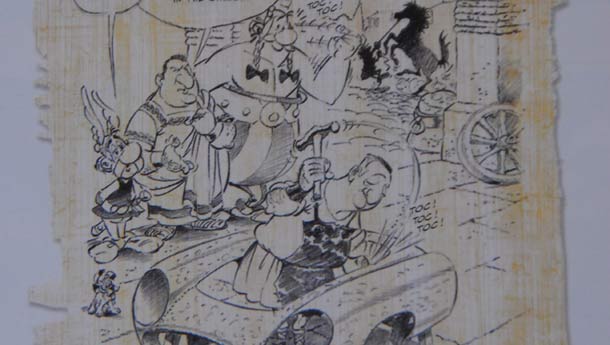 The 50th anniversary edition Asterix comic is with me. I don’t know how I cracked it, but I got it in my hands very, very quickly after its global launch. I’ve been quite lucky. Oh yes, the French postal department’s special edition stamp on Asterix is also on its way – it will be with me very soon after its introduction on December 3. Yes, I have been really lucky.

After the passing away of Goscinny, none of the Uderzo-led comics have been mind-blowingly funny. Still I collected all of them because as a hardcore Asterix fan, I had to have them all. So how good a read is the latest from the 50-year old Gaulish warrior and his bunch of crazy friends. So-so; it’s good in parts.

The bit I liked the best is seen in the above illustration. It is about taking a guided tour in Italy, and the place to visit is the Ferrari factory. Do notice the person who’s hammering the sheet-metal into place – it’s il Commendatore himself! And look at that literally prancing horse! I thought that was cool.

But Asterix and Ferrari have hung around before. In the movie Asterix At The Olympic Games, you have a horse-chariot GP. And Jean Todt and Michael Schumacher actually star in it! They did a good job of acting and were pretty funny. Don’t miss it if you haven’t seen it already. In Asterix And The Normans, Justforkix drives around rashly in an Italian sports chariot (from Modena, if memory serves me right). Of course, its axle breaks because Obelix has gifted Justforkix a huge menhir which he has to cart back home.

Being French, Bibendum has to make an appearance right? And he does just that, repairing Asterix and Obelix’s chariot wheel in Asterix in Switzerland. However, in the golden anniversary edition, there is a reference to a similar wheel repair job – only it’s not Bibendum, but the local French service station chain’s mascot Antar – who looks like a Gaulish warrior himself. Goscinny and Uderzo also have poked fun at the French motorist’s expense, with hilarious traffic jam scenes in several comics.

Generally, these are the prominent automotive references in Asterix comics. Herge was a big automotive buff, so in Tintin... Okay, I’ll save that for later.