Shares of Ashok Leyland continued to surge on Friday on the benchmark BSE. On Thursday, the stock was up 13 per cent and on Friday it rose by 3.44 per cent to Rs 63.15, before ending at Rs 61.55.

The development comes after the company said it expects the third quarter (Q3) and Q4 of 2020-21 (FY21) to be better, margins are expected to rise and Ashok Leyland will be much stronger when the market opens up, which analysts have also echoed.

With the pandemic hitting, this has been one of the most challenging quarters for the industry. Ashok Leyland saw a significant decline in volumes, said the firm’s Managing Director and Chief Executive Officer 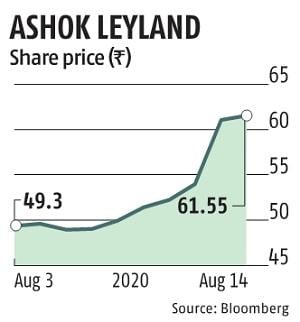 Gopal Mahadevan, whole-time director and chief financial officer of the firm, said added this was an exceptional quarter for the entire economy.

“As we move out of the current financial year, I would say that we would see Ashok Leyland to be a much stronger, resilient, efficient company,” Mahadeven said, attributing the cost saving works to K54 project, which helped the company save around Rs 550 crore in FY20.


The company’s capacity utilisation stood at 30-35 per cent and Mahadevan said he was confident of producing around 10,000 BS-VI units in Q2.


Products from the new platform, code named ‘Phoenix’, will be rolled out in the next 60-90 days. Ashok Leyland plans to invest around Rs 500-600 crore of capex in FY21.


Emkay Global Financial Services analysts expect a gradual revival by the end of FY21, led by a low base, replacement demand and pick-up in economic activity.


Analysts at Motilal Oswal said the Q1 performance was supported by non-vehicle revenue, leading to better mix. While MHCV recovery is expected only in H2FY21, expansion in LCVs should reduce the pain.