ALL, India’s second largest CV player, says while growing the domestic business, it plans to give a fresh push to exports, which will be led by LCVs. “Our new target is more challenging because we are up against global players,” says Dheeraj Hinduja, chairman, ALL.

That’s a tall order, given its performance in recent years. ALL posted a 26.6 per cent decline in exports in the medium, heavy commercial vehicle business in FY18-19, with its traditional markets like West Asia, especially United Arab Emirates, logging a substantial decline. The company shipped 10,922 units of medium and heavy commercial vehicles in FY18-19, compared to 14,898 units in the same period last year.

Among other factors, the company cited elections in Bangladesh and Sri Lanka's own internal political turmoil as reasons for slowing growth in these countries.

So, can it realise its global dream? What kind of time frame has it set for itself to rev up global growth?

Take some of the markets closer home: In Sri Lanka and Bangladesh, for instance. ALL has a range of products, a wide distribution network and is a market leader already, though it has been losing volumes. It has put up both assembling and manufacturing plants in these countries. However, ALL could not replicate its domestic success in the Asean markets because LCVs comprise nearly 80 per cent of these markets and most of these vehicles are left hand drive (LHD). ALL didn’t have appropriate LHD products to serve these markets. In fact, less than 10 per cent of company’s vehicles are LHD (left-hand drive)-compliant, though by April 2020, 100 per cent of ALL vehicles will be LHD-compliant, says the company.

From April 2020, ALL anticipates it will have the products that will serve the international markets effectively. “LCVs are a good way to build a brand in a new market, so well will start with LCVs and gradually expand to M&HCV,” says Hinduja, adding that company is already strong in West Asia, the Saarc countries and some pockets in Africa. ALL will step into the Asean market with its LCV and ICV products, Guru and Boss. It is also pushing Partner, a 4-tonne truck, and MiTR, a 27-30-seater bus.

ALL realises it also needs lower tonnage products. So under Project PhoeniX it is developing products in the 5-7.5 tonne capacity. The company has lined up an investment of nearly Rs 2,000 crore, a major chunk of which will go into developing this platform. The company is looking to fill the empty slot between LCVs and the Boss, a 9-12-tonne ICV, with the new products. 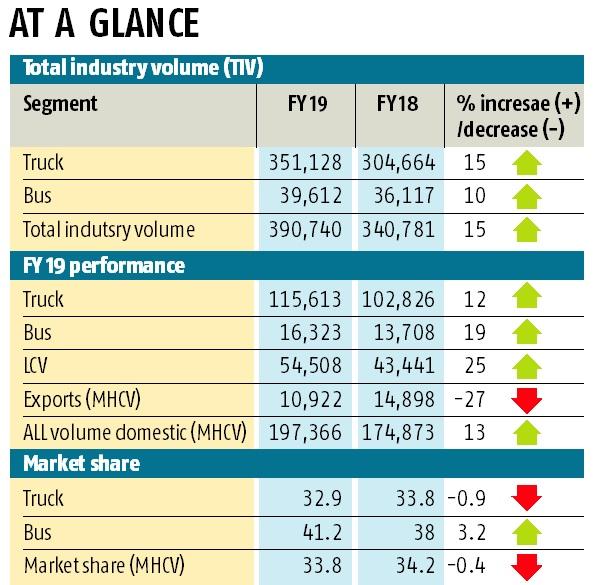 ALL is also building platforms for the future — be it Euro-VI or electric vehicles, they will be based on a modular platform, which will allow the company to design a truck using just a mobile phone app and have that order placed directly at a plant, which would then assemble it.

This means it has to carry minimum inventory and it assure the consumer a faster turnaround time because the vehicles will consume 50 per cent lesser parts.

In some new markets where volumes are promising, ALL plans to set up assembly plants. If all goes according to plan, ALL’s products will be 50 per cent cheaper than a competitive European brand. A stronger infrastructure will also give the company more confidence as it will have a full-fledged local ecosystem and will, hopefully, be seen as local player.

Coming back to its performance in the domestic market, while analysts are not exactly optimistic about growth, Hinduja is hopeful that the initiatives of the new government, especially in the infrastructure sector, will increase demand for vehicles. Analysts warn against being overly optimistic — the industry upcycle usually lasts five-six years and we are already in the fifth year of this round.

The company, on its part, points out how the government is stepping up investment in roads, laying around 21-25 km a day, which will benefit the commercial vehicle sector. The other major demand driver would be the implementation of the vehicle scrappage policy. “I am optimistic that the industry will grow by around 10-12 per cent this fiscal and Ashok Leyland will outpace industry growth,” says Hinduja.